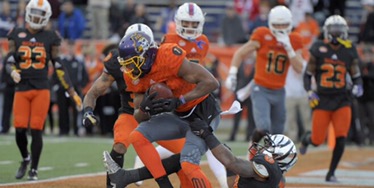 Here are some thoughts on the game and which players improved their stock.

1. East Carolina wide receiver Zay Jones was impressive. Jones caught six passes for 68 yards and a touchdown but it was the two catches he made for touchdowns that didn’t count that were most impressive. Jones showed strong hands and terrific body control on both catches.

There were questions about Jones speed and his ability to separate coming into this week. He answered those questions by getting open on each of his targets. I think he moved up around yesterday. He should go in the second round of the draft.

2. Cal quarterback Davis Webb was also impressive finishing 11 of 16 for 165 yards. Webb showed good touch and accuracy and he was comfortable in the pocket going through his progressions.

Webb has to get used to playing in a pro-style offense but there is no doubt he is an intriguing prospect who could develop into a future starter.

3. St. Francis safety Lorenzo Jerome had a heck of game for the North. Jerome forced a fumble and intercepted a pass in the second half. At 5-11 202, Jerome’s measurables don’t jump out at you but he has terrific ball skills, he’s smart and is super competitive. Jerome is worth taking a chance on in day three because he can play in sub packages and on special teams.

4. Safety Obi Melinfonwu was impressive during the week and I though he played well yesterday. I had questions as to whether or not Melinfonwu would fill the alley and be effective in run support. He did that yesterday. I think he is a first round talent and with a strong combine, he could go in the bottom of the first round.

5. Cornerback is the deepest position in this draft and the corners did not disappoint yesterday. Sure, Zay Jones made a couple of  highlight plays, but he is a dude. The corners played well and proved there could be as many eight corners that could go in the first two rounds of the draft.

6. Alabama tight end O.J Howard checked off the boxes for me in this game. I knew he was a talented receiver but I wasn’t sure how consistent he was as a blocker. He impressed me. He took good angles, played with good strength at the point of attack and got movement. Howard can be an effective in-line player. I think he is a top 20 pick in the first round.

7. I like the running backs in this year’s draft. The position is solid top to bottom. We all know about Leonard Fournette, Dalvin Cook and Christian McCaffery but there will be a lot of value at this position in the later rounds. I thought Matt Dayes, Corey Clement, Donnell Pumphrey and Kareem Hunt all ran hard yesterday. Hunt finished with 115 yards rushing.

8. Tennessee quarterback Josh Dobbs had a solid day statistically finishing 12-15 for 104 yards but he did throw a pick. In fairness to Dobbs, the ball was tipped. I like Dobbs body of work and his competitiveness but his delivery really bothers me. He needs work mechanically.

9. Villanova defensive end Tanoh Kpassagnon made himself some serious cash yesterday. He was a man among boys. At 6-7 280, the size, athleticism and get off are all there. If he tests well, he could end up a top 100 pick.

10. Indiana guard Dan Feeney was as good as I thought he would be. He was fundamentally sound and strong at the point of attack as a run blocker. He moved well laterally in pass protection as well. I think he solidified himself as a first round pick.