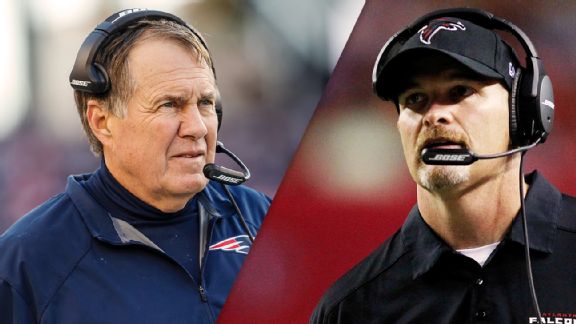 Super Bowl 51 will be Bill Belichick’s 10th Super Bowl appearance. Falcons coach Dan Quinn is coaching in his third Super Bowl in the last four years. So. Which head coach and staff has the advantage? We think its the Patriots. Here’s why.

Head Coaches: Bill Belichick vs. Dan Quinn: Belichick gets the edge here. He will be coaching in his tenth Super Bowl which is insane if you think about it. Belichick is arguably the greatest coach of all time and no one prepares like him and his coaching staff. Dan Quinn  has done a tremendous job turning the Falcons around. He is one of the best defensive coaches in the NFL. You don’t coach in three Super Bowls in four years if you don’t know what you are doing.

Despite Quinn’s recent string of Super Bowl appearances, I think Belichick holds a distinct advantage in terms of big game experience as a head coach and that is the primary reason I am giving him the edge.
Edge: Patriots

Offensive Coordinators: Josh McDaniels vs. Kyle Shanahan: Josh McDaniels and Kyle Shanahan are two of the best offensive minds in all of football. They are terrific play designers and they do a great job of game planning. Both men know how to use their personnel and put them in a position to succeed.

McDaniels and Shanahan know how to use all of the weapons at their disposal to create match-up advantages and expose a weakness in the defense. Case in point. The way they use their running backs in the passing game. James White and Dion Lewis create one on one match-ups underneath and vertically for the Patriots. Davonta Freeman and Tevin Coleman do the same for the Falcons.

Both McDaniels and Shanahan will call great games. This game will come down to turnovers and which defense plays the best in the second half. I think this match-up is a draw.
Draw

Defensive Coordinators: Matt Patricia vs. Richard Smith: Both Patricia and Smith work for defensive minded head coaches so while they might be the defensive coordinators, all of the calls go through the head coaches and both Belichick and Quinn can change a call at any time.

I give Patricia the edge simply because he has worked with Belichick longer and there is more cohesion between the two of them than there is between Quinn and Smith. Quinn basically calls the defense in Atlanta. Smith does most of the game planning in collaboration with Quinn.
Edge: Patriots

Position Coaches: I know I sound like a homer, but I am trying to be as unbiased as possible. The Patriots also have an advantage in terms of position coaches as well. They have a more experienced staff. Men like running back coach Ivan Fears and offensive line coach Dante Scarnecchia have been coaching in the NFL for over 30 years. Belichick has been in the league for over 40 years.

Conversely, Quinn has hired a bunch of former NFL players that have either played for teams he’s coached or have a connection to a team he’s coached. Outside of Smith and running backs coach Bobby Turner, the Falcons don’t have a ton of experience on their staff.
Edge: Patriots

The Patriots have the edge in coaching but will it win them the game on Sunday? Possibly. Coaches coaches, players play. Players also win games. Bottom line. Super Bowl 51 will come down to the players more than it will the coaches.