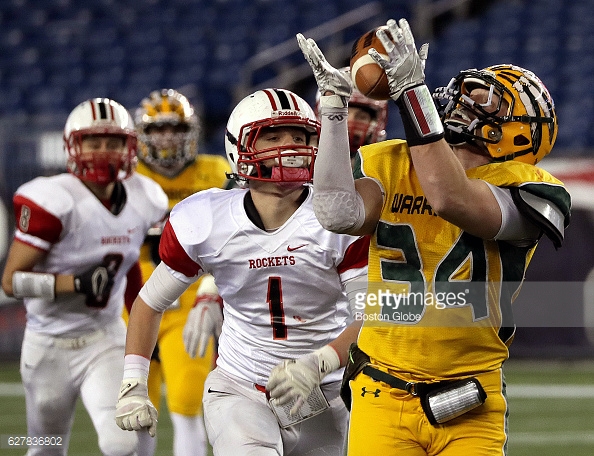 King Philip Tight End Brett Mazur will be attending Army in the fall.

It was a busy National Signing Day around these parts as several high profile prospects from the state of Massachusetts committed to the school they will attending and playing football at over the course of the next four years.

Here are some thoughts on the day.

1 Xaverian had 14 players commit to playing college football on Wednesday. That is impressive and a testament to the kind of program that Charlie Stevenson built on Clapboardtree Street. Stevenson not only stressed success on the field but success in the class room as well.

2. Ifeatu Melifonwu almost spurned Syracuse for Michigan but in the end, he decided to stick with his commitment to Syracuse. I think it was the right decision. Melifonwu could play right away for the Orange.

3. Bridgton’s Alex Marshall has had a roller coaster high school career but he finally landed in Tallahassee with the Seminoles. Marshall will have an opportunity to potentially get on the field next fall and realize his immense potential.

4. Army picked commitments from King Philip’s Brett Mazur and Billerica’s Scott Murphy. Both played tight end and defensive end and both could eventually develop into contributors at West Point. I am proud to say I coached Brett at King Philip and I couldn’t be happier for him and his family.

5.New Bryant University coach James Perry used local connections to put together an impressive first recruiting class. Perry and his staff recruited Massachusetts hard and were able to come away with several key commitments. Getting Xaverian’s Mekhi Henderson late on Wednesday night was a coup for the Bulldogs.

6. Good for Danvers Matt Andreas (ATH) for getting an opportunity at Stenson University in Florida. Andreas was one of the best players in the state last season but flew under the radar.

Wide receiver John Cappelletti is going to Bryant, Athlete Asong Aminmentse is going to Wagner, Running Back Blake Hill is going to Yale and offensive lineman Riley Burns is going to UNH. That is pretty impressive considering Milford flew under the radar this season in the Hockomock League.

10. I am surprised that Shepherd Hill running back Kevin Mensah hasn’t committed yet. Curious to see where he ends up.