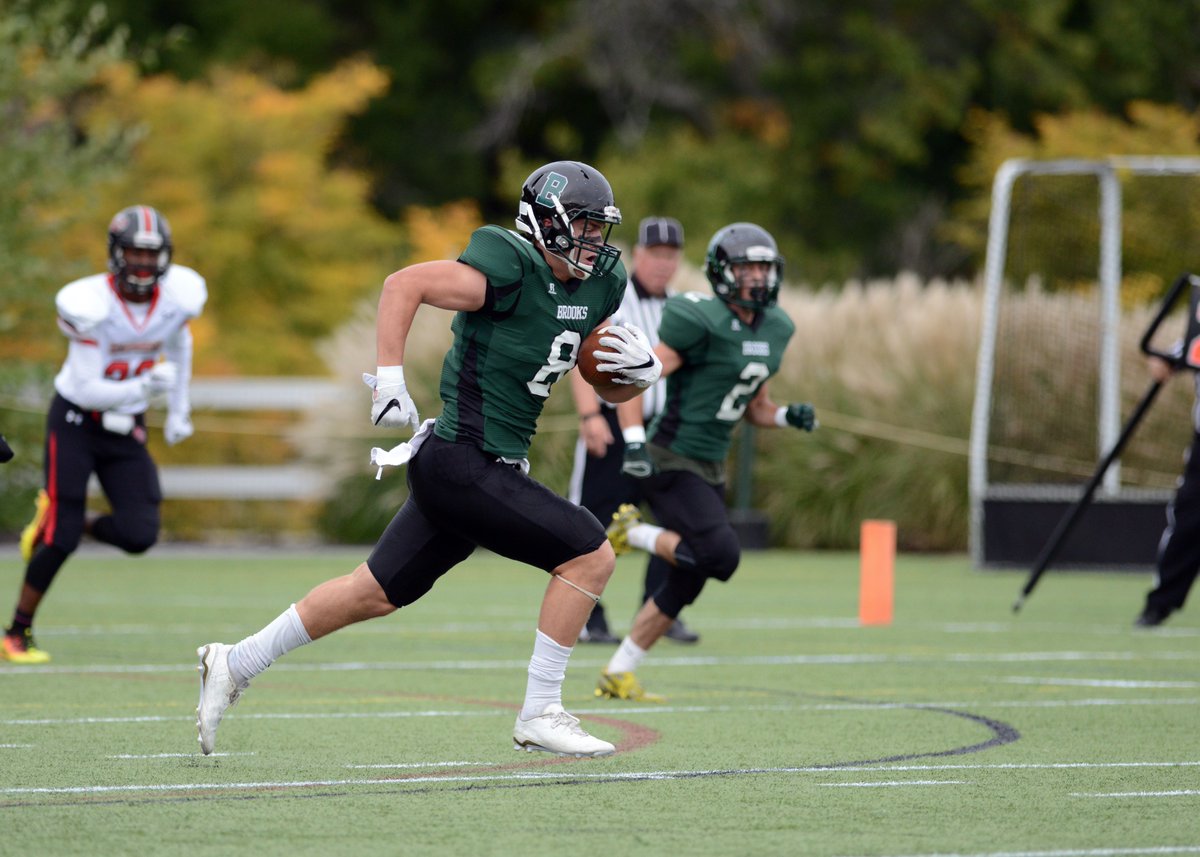 2018 recruiting is in full gear now that camp and combine season is here. Here is our preliminary list of the top 20 prospects in the state of Massachusetts right now. The list is subject to change.

1. Pat Freiermuth, TE, 6-5 260, Brooks School: Freiermuth has verbally committed to Penn State. The 6-5 tight end is athletic, has strong hands and can run a full route tree. Freiermuth can be effective from a variety of alignments. Penn State landed a player who could step in and contribute as a freshmen.

2. Finn Dirstine, OT, 6-5 320, Lawrence Academy: Dirstine committed to Boston College yesterday. As one of the nation’s top offensive line prospects, I suspect he will kick inside and play guard for the Eagles. Dirstine is technically sound and strong on contact. He is good enough to see playing time as a freshmen.

3. Jay Symonds, TE, 6-4 257, BB&N: Symonds is a move tight end who can line up in a variety of spots in a formation and create match-ups. He will flourish in Pitt’s multiple offense. He must play heavier as a run blocker but he has terrific upside and will continue to develop.

4. Ryan Betro, OT, 6-4 280, Lawrence Academy: Betro committed to Boston College yesterday morning. He is strong at the point of attack in the run game and has heavy hands. He is not a natural bender so he will need to work on dropping his hips. Betro could also move inside to guard.

5.  Danny Abraham, RB, 5-11 190, B.C High: Abraham already has several offers on the table. He is a one cut runner who can stick his foot in the ground and accelerate into the second level. Abraham has shown an ability to finish runs at this level. It will be interesting to see if he can do it at the next level.

6. Joe Luchetti, TE, 6-6 240, Lawrence Academy: Another Boston College commit. Luchetti is a long, rangy tight end who is a good athlete and can make plays in space after the catch. He has some room to grow both in terms of his game and his frame.

7. Jake Bobo, WR, 6-4 175, Belmont Hill: Bobo has committed to Duke University. He is a tall, lean receiver who runs good routes and gets in and out of his breaks with ease. Bobo has elite ball skills. He shows good body control on jump balls and wins one on one situations routinely. He is a terrific pick up for David Cutcliffe and his staff.

8. Bret Edwards, QB, 6-2 170, Central Catholic: Edwards has plus arm strength and is a terrific athlete. He is comfortable in the pocket and is willing to hang, hitch and deliver the football. His feet can be wide at times and he is a little loose with the football but the coaching staff at UNH (he has committed there) will fix it.

9. Johnny Rosario, WR, 6-4 195, Willston-Northhampton: Rosario is at Thornton Academy in Saco, Maine. He has committed to the University of Maine. Rosario has strong hands, shows good body control one on one and he can stack and separate from a defender after the catch. He is a tad unpolished as a route runner but he will get better in that area.

10. Alec Beesmer, QB, Milton Academy, 6-2 185: I really enjoy watching this kid on tape. He is nice and tall in the pocket and his mechanics are smooth. Shows good touch and accuracy on his deep ball and he can zip the short stuff. Beesmer is an FBS caliber quarterback physically.

11. Scott Murphy, TE/DE, 6-3 230, Billerica: Murphy has committed to Army. He is a good fit in the Knights 4-3 defensive as a five technique defensive end. Murphy can anchor down and hold the point against the run game and he has a relentless motor as a pass rusher. He does need to further develop as a pass rusher but the tools are there.

12. Alex Small, RB/LB, 5-10 185, Nantucket: Small is a dynamo in the open field. He has a third gear once he gets in the clear. Small plays in a Delaware Wing-T offense predicated on misdirection but look for the Nantucket staff to run more space plays with him this season.

13. Chad Peterson, QB/DB, 6-2 195, North Attleboro: Peterson is a good athlete who is effective as both a passer and as a runner. Having coached against Peterson the past two years, I can tell you he is one of the best dual threat quarterbacks in the state.

14. Bobby DeMeo, WR/CB, 6-0 195, B.C High: DeMeo is a terrific all around athlete with good ball skills and the speed to match. I think he is better as a corner and that is where he has the best chance to get a major offer. He is terrific in run support. He is not afraid to come and make a form tackle.

15. Brian Abraham, WR/FS, 6-3 185, Xaverian: Abraham is a long, athletic safety who can play off the hash in Cover 2 or right down the middle in Cover 1 or 3. He has good instincts, show good route recognition and he breaks on the ball quickly.

16. Andrew Del Brocco, WR/CB, 6-3 195, St. John’s Shrewsbury: Del Brocco was a dude last season for the Pioneers. Another dual skill guy who I think projects as a defensive player at the next level. He is willing to come off of blocks and support the run and he has natural instincts when it comes to defending the pass.

17. Aiden Gillis, C, MLB, 6-3 230, Marblehead: Gillis is an effort player. He is never out of a position and he always finds the ball. He plays with great instincts but he has a tendency to play tall and is a step late in his reads at times. Needs to shorten his base. Plays too wide. Gillis has the size, compete level and toughness coaches look for in their inside linebackers.

18.Bryce Shaw, FB/ILB, 6-1 210, Bridgewater-Raynham: Another young man that I have coached against. Shaw is a load at fullback. He attacks the line of scrimmage whether he is leading a play or getting the ball. He runs square with a balanced pad level. Shaw is even better at linebacker where he shows good instincts and an ability to consistently get to the ball carrier. Navy is getting a heck of a player.

19.Shane Frommer, RB/OLB, 5-11 180 King Philip: I coach Shane Frommer and I can tell you this much about him. No one gets more out of the game of football than this kid. He is a patient runner who runs with a square pad level. He picks and slides at the line of scrimmage and can make one cut and go. He could be even better at strong safety or outside linebacker where he is fearless. Frommer is terrific in run support. He is willing to attack blockers and finish plays. Highly competitive. Frommer has FCS potential.

20. Cedric Gillette, WR/FS, 6-1 175, Andover: Gillette is a natural hand catcher who runs good routes and can consistently get in and out of his cuts. He has good size and is better suited to play split end than he is in the slot.