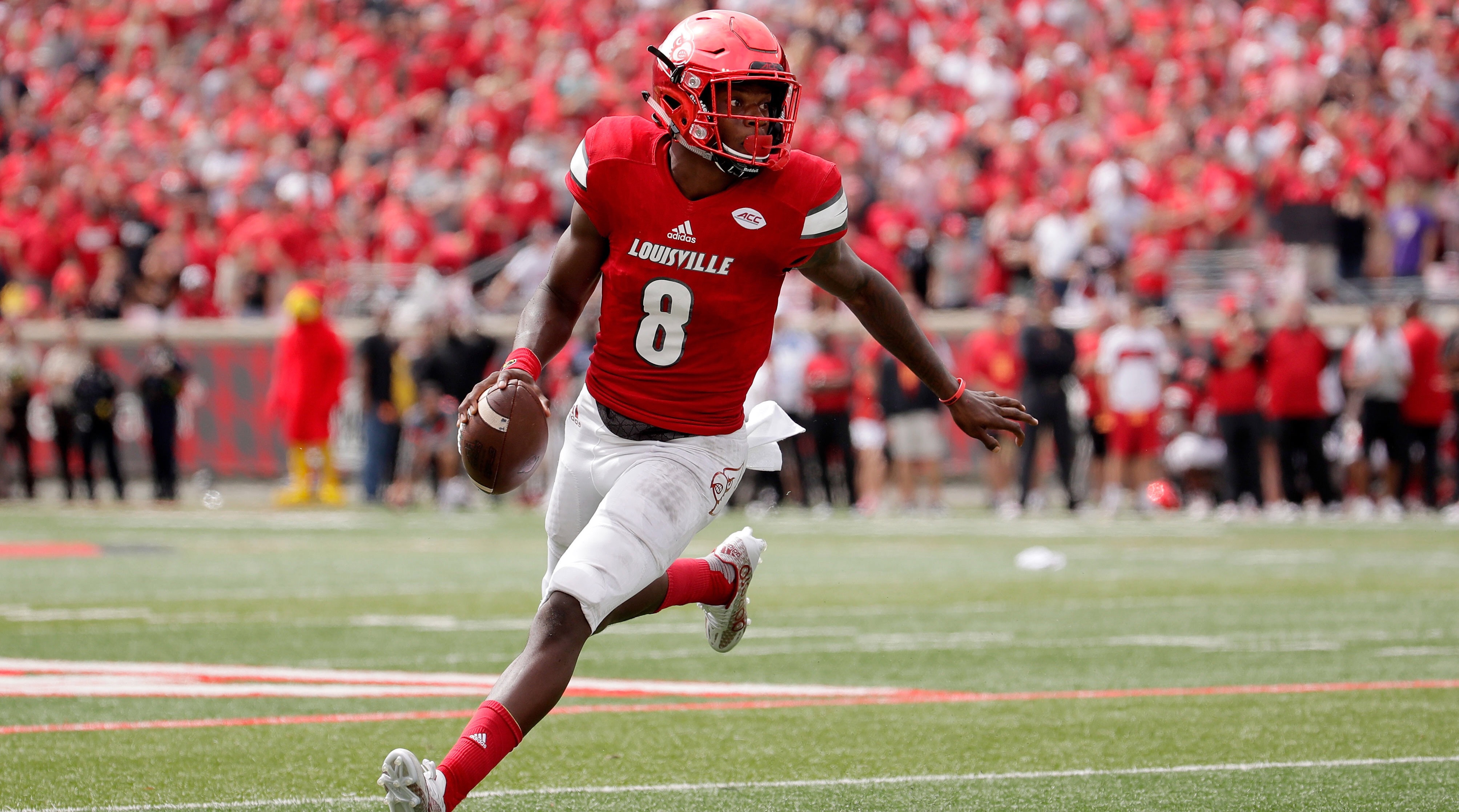 Reigning Heisman Trophy winner Lamar Jackson had a season for the ages in 2016. The first year starter threw for 3,543 yards and 30 touchdown passes and rushed for 1,571 yards and 21 touchdowns. Jackson accumulated over 5,000 yards of total offense and 50 total touchdowns in what was one of the greatest offensive seasons for any player in college football history.

Jackson’s freakish athleticism is a big key to his success but the system that Bobby Petrino has installed at Louisville also plays a big part in Jackson’s success.

Petrino has done a terrific job of building his offensive scheme around Jackson’s strengths. He does not force Jackson to hold the ball on complicated reads in the passing game or condense formations and force him to run into the backs of his offensive lineman.

So how does a quarterback in Bobby Petrino’s offense rack up such impressive numbers? Here are some examples of plays that allow Petrino to tap into Jackson’s immense talent.

Power Ride is a staple spread offense running play. It is a traditional man gap running play that is blocked like power but without a kick out block. Instead, the quarterback reads the front side defensive end or over hang player and based on his post snap movement, either gives the ball to the halfback laterally or pulls it and fits in behind the pulling backside guard.

Louisville runs this play mostly out of 10 and 11 personnel but they will run it out of 12 personnel as well. In diagrams 1 and 2, Louisville runs Power Ride to the trips side. In diagrams 3 and 4 they run it to the weak side. Jackson scored a 70 yard touchdown against Boston College last season running this play away from trips.

Diagrams 5 and 6 are examples of a two back power ride running play. The lateral Read forces the linebackers to play this over the top and it creates running lanes inside.

Power Ride is a staple running play for the Cardinals in all down and distance situations. Petrino wants the ball in Jackson’s hands as much as possible and this is one of the running plays that allows him to do that.

Veer Read (with a fill block)

Veer Read is a play that the Jim Harbaugh led 49ers made popular in 2011 and 2012. Offensive coordinator Greg Roman put the Veer Read series in for Colin Kaepernick to take advantage of his athleticism.

Veer blocking allows the offensive line to get a vertical push upfront by double teaming at the point of attack. The type of double utilized changes depending on the front and the defensive line alignments.

In diagrams 8 and 9, Jackson reads the defensive end. The defensive end gets nosy and squeezes down inside. As a result, Jackson pulls it and follows the fill lead block coming from the backside.

Plays like these are tough to defend because of the power blocking scheme and the element of misdirection.

Petrino loves to throw the ball out of empty.   In diagram 9, Louisville is in an empty formation. The trips are to the left. The route concept is simple. Hitches to the two receiver side with a replacement hitch to the trips side. The slot and outside receiver to trips run a seam and a fade that could convert to hitches but they are not the primary read in Jackson’s pre-snap progression. This is pitch and catch football.

Sprinting out or rolling the quarterback out has made a comeback in all three levels of football. When you have a dual threat quarterback like Jackson, moving the pocket for him is an effective way to give him a run, pass option and to cut the field in half in the progression.

Here against Clemson, Petrino calls a sprint out pass play in his own end of the field. The concept is a leveled concept designed to attack different areas of the field and create separation. Jackson reads high to low in his progression. Depending on the alignment of the flat defender, he will either throw it or tuck it and run.

As I mentioned earlier. Petrino likes to throw the ball out of empty a lot. Here is a simple layered five step concept that allows Jackson to make a quick pre and post snap read. Frontside on the trio trips side he has a drive concept (dig route, drag route) with a post over the top.

Jackson’s read is inside because it is a middle flood. He reads the dig to the crosser underneath. The crosser is his hot if he gets pressure.

If Jackson sees a man to man match up he likes on the backside switch combo, he takes it.

As you can see, the combination of Petrino’s mind and Jackson’s athleticism and arm strength is lethal. That is why Louisville will once again be a contender both in the ACC and nationally as well. I would not be surprised if Jackson wins the Heisman Trophy again. He will be the favorite going into the season.