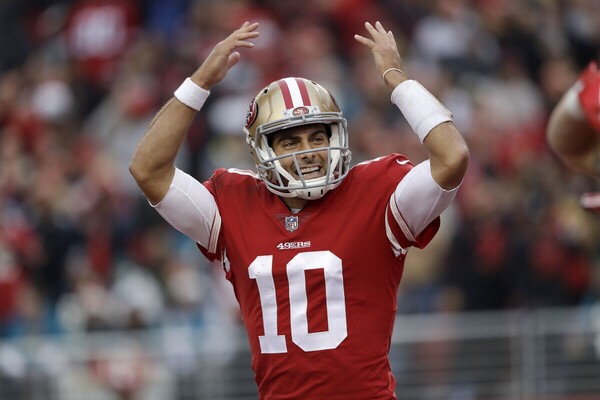 The San Francisco 49ers signed quarterback Jimmy Garopollo to a 5 year, $137 million dollar contract on Thursday. $48 million of it is guaranteed. Garopollo came over from the Patriots in a trade last season and led the 49ers to a 5-0 record in the games he started.

Look, I get it. I know you have to pay quarterbacks today, especially upper echelon quarterbacks but the 49ers badly overpaid for Garopollo.

I get it. Garopollo is 7-0 as a starter, has plus arm strength and his intangibles are off the charts but he has only started seven games. Seven flippin games! You pay a quarterback $27.5 million per season on production and reputation, not potential.

Could Garopollo be the next great quarterback in the NFL? Sure, there is no doubt that he has the potential to be an elite starter in the NFL for a long time. So offer him a bridge contract for four years at $60-$70 million and see how he does. If Garopollo out perform that contract, then give him a longer, more lucrative extension.

It is obvious that John Lynch and Kyle Shanahan felt that they were going to overpay for a guy like Kirk Cousins so why not overpay Garopollo. You already know what he can do. I get that logic but again, they didn’t need to overpay him to keep him in the fold. No team in the open market was going to give Garopollo that kind of money.

It remains to be seen if Garopollo is good enough long term to take this organization to the next level. A 7-0 record as a starter is impressive but it is only a small sample. Let’s see what he does a full time starter and see if he worth being the highest paid player in the league.