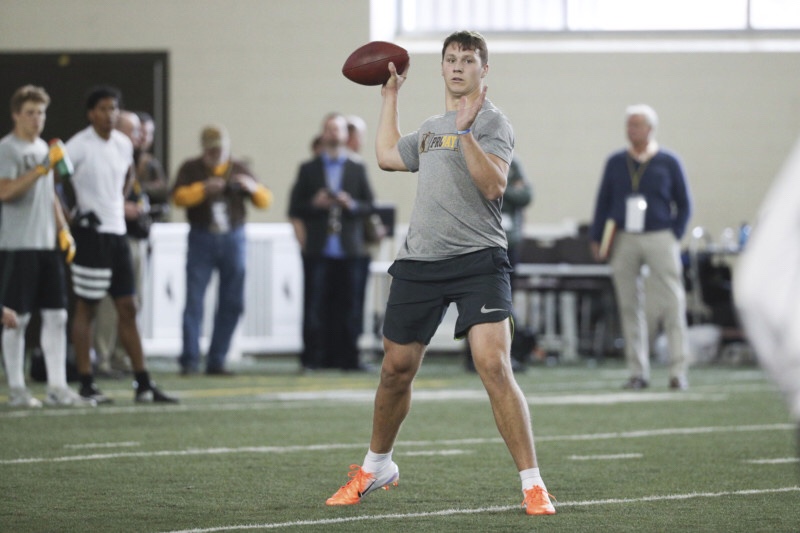 Josh Allen is the talk of this draft but some of the criticism of him is over the top.

Wyoming quarterback Josh Allen is the most polarizing and talked about player in the 2018 draft. Allen has divided the scouting community and the media alike. You either love him or you loathe him as a prospect. Put me in the love him column. There is a lot to like about Allen.

I love the obvious attributes with Allen. His size and arm strength are elite. He looks the part. He is big, strong, smart and tough. He also played in a pro-style offense which is a plus. What’s not to like?

Then there is the other perspective on Allen. Watch the Nebraska and Iowa games from the past two seasons and you might also deduce that Allen should move to tight end. That insane argument has been bandied about in scouting circles.

Allen looks the part physically and despite performing well at the combine and at his pro day, he is flawed fundamentally. Allen needs a lot of mechanical work on his release, timing and anticipation. His accuracy is atrocious. He routinely missed open receivers at Wyoming which is a big reason why his career completion percentage in college was 56.2.

In fairness to Allen, the other quarterbacks in this draft are flawed as well. Sam Darnold is careless with the football and he turned it over frequently at USC. UCLA’s Josh Rosen has a history of concussions and has had some attitude issues. Baker Mayfield has also had attitude issues and some question if he has the requisite size to play quarterback in the NFL. Then there is Lamar Jackson. Great athlete but he needs a lot of work as a quarterback. Many evaluators have suggested he switch to receiver.

Regardless of where you stand on Allen, there is no denying he is talented. In a year where there are so many teams that need quarterbacks, Allen will go in the top 10. All it takes is one team to fall in love with him and draft him.

I see a lot of Ben Roethlisberger in Allen. Big Ben had question marks about accuracy and consistency as well when he came out of Miami of Ohio but has overcome those issues and carved out a hall of fame career.

As long as Allen is given time to work through his accuracy issues and develop, he will be fine. If he’s forced to play early, Allen will struggle and fail to meet expectations. He will become what some talent evaluators and media members already think he is. A bust.

All of the quarterbacks in this class are flawed, not just Josh Allen. Somehow, Allen being flawed has become the narrative of this draft and it is not fair.