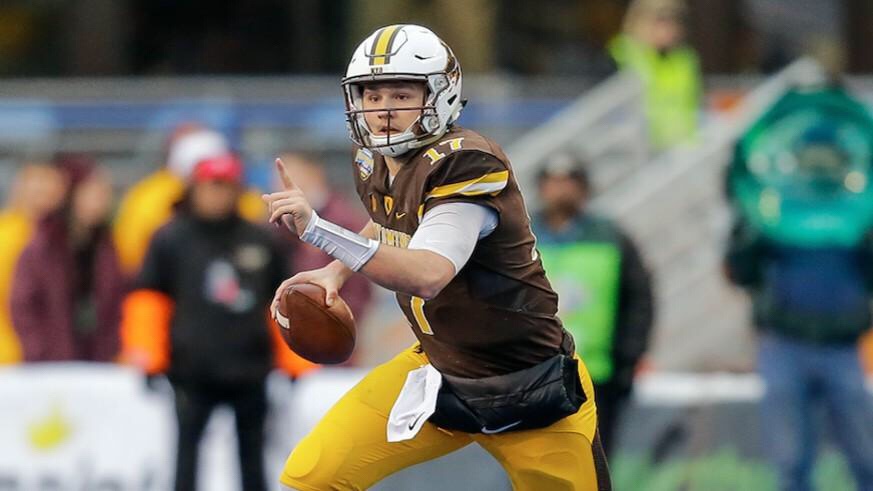 The Browns are going to shock the football world and take Josh Allen number one overall.

My second of three mock draft is here. There are some changed at the top based on pro days and some of the chatter that is circulating around teams at the top of the draft.

Here is our second mock draft of the pre-draft process.

1. Cleveland Browns: Josh Allen, QB, Wyoming: Where there is smoke, there is fire. Hue Jackson likes Allen’s big time arm and toughness. In a draft where there isn’t a big difference between the top quarterbacks, taking Allen makes sense here for Cleveland.

3. New York Jets: Josh Rosen, QB, UCLA: The Jets need a quarterback for now and in the future. The physically talented Rosen would be a great fit in the Big Apple.

4. Cleveland Browns: Bradley Chubb, DE, N.C State: The Browns continue to add to their front seven and Chubb could be the center piece of a revamped defense.

*5. Buffalo Bills: Sam Darnold, QB, USC: The Bills will trade into this spot and get their franchise quarterback in Darnold. Buffalo has the ammunition needed to jump up seven spots. (Trade with the Broncos)

6. Indianapolis Colts: Quenton Nelson, OG, Notre Dame: Nelson is one of the best players in this draft and could anchor the Colts offensive line for years to come. Tough, smart and technically sound. Nelson is the complete package.

7. Tampa Bay Bucs: Minkah Fitzpatrick, CB/S, Alabama: The Bucs have had a revolving door at safety but the versatile Fitzpatrick could fill that hole for a long time.

8. Chicago Bears: Trumaine Edmunds, OLB, Va Tech: Edmunds is ideally suited to play in the 3-4 as a WILL backer. He can rush off the edge and is athletic enough to play in underneath coverage. A three down linebacker who can make a difference as a rookie.

9. San Francisco 49ers: Denzel Ward, CB, Ohio State: The 49ers have an elite front seven but the back seven lacks a difference maker at corner back. Ward fills that void in coverage and run support.

10. Oakland Raiders: Roquan Smith, OLB, Georgia:  The Raiders could trade this pick and acquire more assets. If they don’t they will draft the athletic Smith and fill a need along their front seven.

11. Miami Dolphins: Derwin James, FS, Florida State: The Dolphins could go quarterback here but if they don’t, they will take the most talented defensive player on the board in James. James will make an impact from day one.

12. *Denver Broncos: Baker Mayfield, QB, Oklahoma: The Broncos have coveted Mayfield from day one. Once the Jets pass on him, Denver will trade down and get their quarterback of the future. (The Broncos also acquired the 53rd pick in the second round and the 121st pick in the fourth round in the trade with the Bills)

13. Washington Redskins: Vita Vea, DT, Washington: Vea is jumping up teams boards so he could be gone by this pick. He fills an immediate need for a Redskins team that needs an interior presence on defense.

14. Green Bay Packers: Marcus Davenport, BE, UTSA: The Packers have signed Tremon Williams and Davon House to play corner. They will focus on the pass rush and add the explosive Davenport.

15. Arizona Cardinals: Lamar Jackson, QB, Louisville: The Cardinals signed Sam Bradford and two young quarterbacks. None of them are in the Cardinals plans long term. With the Patriots interested in Jackson, the Cardinals will strike and take their quarterback of the future.

16. Baltimore Ravens: Calvin Ridley, WR, Alabama: The Ravens could go in a variety of directions here including trading the pick. In the end, they will take the best receiver in the class in Ridley.

17. Los Angeles Chargers: Harold Landry, BE, Boston College: You can never have enough pass rushers. Defensive coordinator Gus Bradley likes edge rushers who are on the smaller side and can play in a two and three point stance. Landry fits the criteria.

18. Seattle Seahawks: Josh Jackson, CB, Iowa: The Seahawks could go running back with this pick but instead they will address the more pressing need and take the best long corner in this draft in Jackson.

19. Dallas Cowboys: Maurice Hurst, DT, Michigan: The Cowboys will go back to the Michigan well once again and draft the most disruptive front seven prospect in this draft in Hurst.

20. Detroit Lions: Derrius Guice, RB, LSU: The explosive Guice packs a punch and can play in any system. GM Bob Quinn likes fortifying his offensive and defensive lines but the Lions need a starting tailback and Guice is a good scheme fit.

21. Cincinnati Bengals: Mike McGlinchey, OT, Notre Dane: The Bengals need to improve along the offensive line and McGlinchey is what they. He is a tough, physical run blocker who also excels as a short area pass blocker.

22. Buffalo Bills: Leighton Vander Esch, ILB, Boise State: Vander Esch is big, smart and tough. All qualities you want in a MIKE linebacker. Sean McDermott wants to find his Luke Kuechly in Buffalo. Vander Esch might be the closest he gets.

23. New England Patriots: DaRon Payne, DT, Alabama: With Malcolm Brown a free agent after next season, Belichick wants to prepare for his potential departure in free agency while adding an impact player. Payne is a disruptive shade tackle who can re-create the line of scrimmage and make plays behind the line. He also has experience playing in a pro style defense for Nick Saban which is an added bonus.

25. Tennessee Titans: Harrison Phillips, DT, Stanford: Mike Vrabel and defensive coordinator Dean Pees are Bill Belichick disciples. You know what that means? Building from the inside out.

28. Pittsburgh Steelers: Hayden Hurst, TE, South Carolina: Jesse James and Vance McDonald are good tight ends but defenses don’t game plan for them. You have to game plan for a players like Hurst. He would be a nice safety valve for Big Ben.

29. Jacksonville Jaguars: Christian Kirk, WR, Texas A&M: Kirk could be a weapon both as a receiver and returner. The Jags lack big play ability and Kirk fills the void.

30. Minnesota Vikings: Will Hernandez, OG, UTEP: Hernandez is physical and a tone setter. He has the talent and the toughness to be the linchpin of the Vikings offensive line for a long time.

31. New England Patriots: Jaire Alexander, CB, Louisville: The Patriots need to replace Malcolm Butler and Alexander is similar in build and style. He would be a good scheme fit for the Patriots.