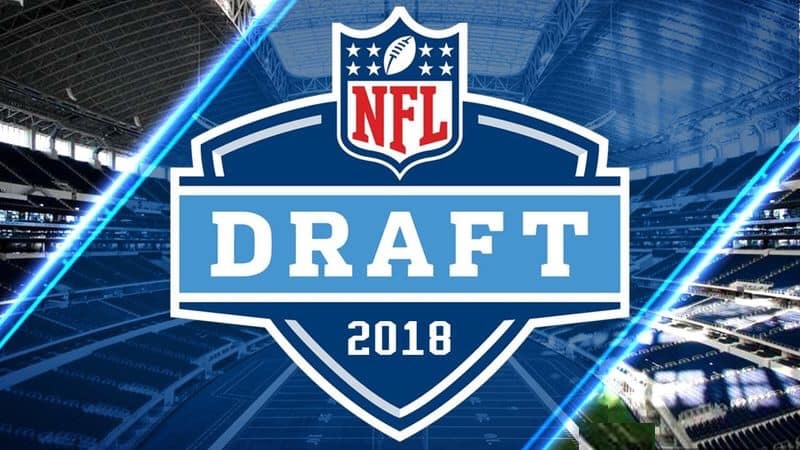 1. Cleveland Browns: Sam Darnold, QB, USC: The Browns dipped their toes in the water with Josh Allen but they take the safest quarterback in this draft in Darnold.

2. New York Giants: Saquon Barkley, RB, Penn State: Giants GM Dave Gettleman has never traded down as a general manager. He is not about to start with the best on the board in Barkley. The Giants need to run the football to protect Eli Manning and their defense. The multi-talented Barkley will do that.

3. New York Jets: Josh Rosen, QB, UCLA: Rosen is the most ready to start quarterback in this draft. The Jets have 39 year old Josh McCown on the roster but they would love to draft their quarterback of the future and play him if he is ready. Rosen is that guy.

4. Cleveland Browns: Bradley Chubb, DE, N.C State: The Browns would like to trade out but if they don’t, they will take one of the five best players in this draft in Chubb. Chubb along with 2017 first overall pick Myles Garrett gives the Browns one of the best defensive duos in the NFL.

5. Buffalo Bills: Josh Allen, QB, Wyoming: The Bills will trade the 12th, 22nd and 65th picks to the Broncos to move up and take Allen. Allen is the most physically gifted quarterback in this draft but he will need time to develop.

6. Indianapolis Colts: Quenton Nelson, OG, Notre Dame: Colts GM Chris Ballard would like to trade down but if he doesn’t get the right offer, he will take the second best player in this draft in Nelson. Protecting Andrew Luck is priority number one for the Colts now.

7. Tampa Bay Bucs: Derwin James, FS, Florida State: The Bucs will upgrade their secondary with the rangy James who is a Florida native. James can play in all packages and situations and would fill a major need in Tampa’s secondary.

8. Chicago Bears: Trumaine Edmunds, OLB, Va Tech: The Bears will look pair Edmunds up with Leonard Floyd to give them one of the best outside linebacker duos in the NFL.

9. San Francisco 49ers: Denzel Ward, CB, Ohio State: The 49ers signed Richard Sherman but they need a corner that can start opposite him. Ward fits the bill. He has the ball skills and the athleticism to be a pro bowl caliber corner.

10. Oakland Raiders: Roquan Smith, OLB, Georgia: Smith is your prototypical three down linebacker. At 6-1 237, he has the size and the speed to be dominant. The Raiders have multiple holes along their front seven. Smith fills one of them.

11. Arizona Cardinals: Baker Mayfield, QB, Oklahoma: The Cardinals will trade up four spots and take Mayfield as their quarterback of the future. Mayfield is almost ready to play but with Sam Bradford and Mike Glennon on the roster, Mayfield can sit and learn for a year.

12. *Denver Broncos: Mike McGlinchey, OT, Notre Dame: McGlinchey is the best offensive tackle in this draft. He is climbing up teams draft boards and makes sense here for a Broncos team that needs to upgrade their offensive line. *Trade with Bills

14. Green Bay Packers: Jaire Alexander, CB, Louisville: The Packers want to trade up but if they cannot, they will end up drafting Alexander who is climbing up teams drafts boards.

15. *Miami Dolphins: Minkah Fitzpatrick, FS, Alabama: The Dolphins need to upgrade a secondary that lacks a play making safety over the top. Fitzpatrick plugs that hole from day one. He will make an immediate impact as a rookie. Trade with Cardinals

16. Baltimore Ravens: Calvin Ridley, WR, Alabama: The Ravens signed Michael Crabtree and Willie Snead. Now they add Ridley to a receiving corp that is much improved.

17. Los Angeles Chargers: Lamar Jackson, QB, Louisville: The Chargers have other needs but they are going to take the best player on the board in Jackson. Phillip Rivers isn’t retiring anytime soon but drafting his heir apparent now makes sense.

18 Seattle Seahawks: Marcus Davenport, BE, UTSA: The Seahawks could go corner here but instead will opt for the freakishly athletic Davenport who is the best pass rusher in this draft.

19. Dallas Cowboys: Da’Ron Payne, DT, Alabama: Payne is a three down player who can gap control against the run and get a push as a pass rusher. Cowboys fans will want their team to go receiver with this pick but Payne is the better pick because he can make more of an impact.

20. Detroit Lions: Harold Landry, BE, Boston College: Landry is undersized and struggles to set the edge but he is one of the best pass rushers in this draft and has the ability to make an impact as rookie for the Lions.

21. Cincinnati Bengals: Frank Ragnow, C, Arkansas: The Bengals are famous for standing pat and taking players that fill needs. Ragnow fills a major need inside at center for a team that wants to be more balanced offensively in 2018.

22. *Denver Broncos: Derrius Guice, RB, LSU: The Broncos released C.J Anderson last week and only have Devonte Booker as the only experienced running back on the roster. Guice could step in and start as a rookie. At 5-11 224 he packs a punch and breaks long runs routinely.

23. New England Patriots: Rashaan Evans, OLB, Alabama: The Patriots have multiple needs to address. Check linebacker off with Evans who has experience playing in a pro style defense at Alabama. He will step in, start as a rookie and make an immediate impact.

24. Carolina Panthers: D.J Moore, WR, Maryland: The Panthers have size at receiver but lack that underneath slot receiver who can separate after the catch. Moore can do that and return kicks. The Panthers need more playmakers on offense and Moore fills that need.

26: Atlanta Falcons: Taven Bryan, DT, Florida: Bryan has good size at 6-5 291 and a big time motor to go with it. He would be a good complement to Grady Jarrett in the Falcons as the three technique defensive tackle.

27. New Orleans Saints: Hayden Hurst, TE, South Carolina: Hurst is the best all around tight end in this draft and he fills an immediate need for a Saints team that has an intriguing skill group.

29. Jacksonville Jaguars: Courtland Sutton, WR, SMU: The Jaguars lack of a number one receiver hurt them in the AFC Championship game. Sutton solves that problem. He is tall, athletic, runs good routes and has strong hands. Sutton will give Blake Bortles a reliable red zone target.

30. Minnesota Vikings: Will Hernandez, OG, UTEP: As good as the Vikings are, they have a lot of holes along the offensive line. Hernandez will fill an immediate hole at right guard and add some much needed toughness and attitude. The Vikings must upgrade the offensive line if they want to make a Super Bowl run. Hernandez is a good start.

31. New England Patriots: Kolton Miller, OT, UCLA: Losing Nate Solder was a crushing blow for the Patriots but replacing him with a clone who is 6-8 309 and runs 4.95 forty is not a bad option.

32. Philadelphia Eagles: Isaiah Oliver, CB, Colorado: Oliver is climbing up teams draft boards and there is a good chance the lengthy corner now goes in the first round. Philadelphia has two young corners they like in Ronald Darby and Sidney Jones and they add another one in Oliver.