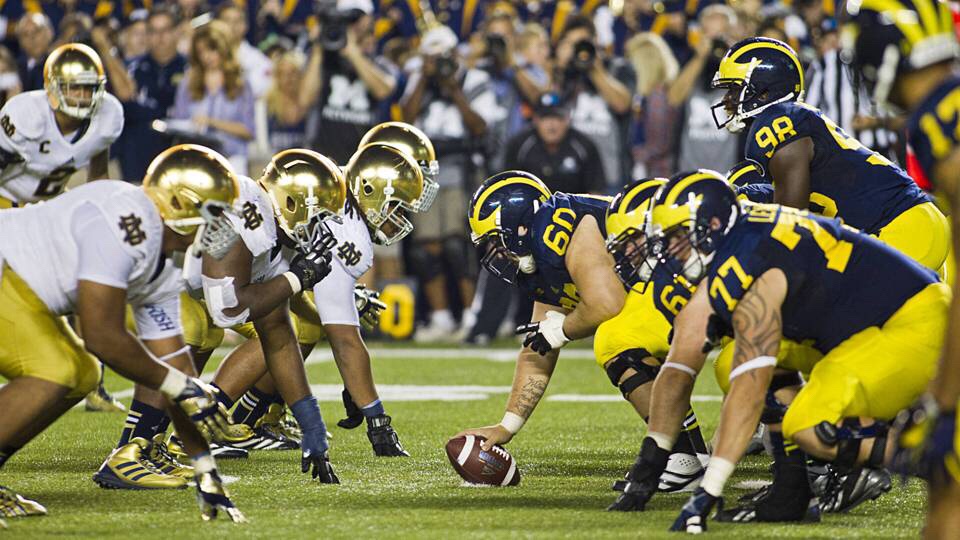 Each and every season, we get great match ups in college football that put some of the best programs in the country. This season is no different.

Here are ten match-ups that are sure to make you watch.

Washington at Auburn Sept 1st: This game will feature a terrific quarterback battle between Jarrett Stidham of Auburn and Jake Browning of Washington. The winner of this early season showdown will have the inside track on a playoff spot.

Michigan at Notre Dame, Sept 1st: These two schools are meeting for the first time since 2014. Both programs are going into this season with high expectations but those expectations could tempered with a loss in this game.

Clemson at Texas A&M, Sept 8th: Dabo Swinney and Jimbo Fisher just cant stand the thought of being apart from each other. This should be a good test for #2 Clemson. Texas A&M is dangerous, especially at Kyle Field.

Ohio State at TCU, Sept 15th: This game would have been tough for Ohio State even if Urban Meyer coached in it. It’ll be even tougher now without Meyer. The TCU faithful will pack AT&T Stadium and make it tough on the Buckeyes.

Texas A&M at Alabama, Sept 22nd: We will find out if Jimbo’s Aggies are ready to compete for an SEC title. There is no bigger test in the conference than Bama.

Ohio State at Penn State, Sept 29th: Ohio State got crunked the last time they went to Happy Valley. This version of the Nittany Lions isn’t as good as the 2016 version. The Buckeyes should be more competitive in this game.

Florida State at Miami (Fla), Oct 6th: The Battle for Florida isn’t just about bragging rights. It’s about get a leg in recruiting as well. With the Canes being relevant again, this game takes on an added importance.

Texas vs. Oklahoma, Oct 6th: The Red River Shootout is one the best rivalries in all of college football. This year’s game features two teams that should be pretty evenly matched.

Wisconsin at Michigan, Oct 13th: Wisconsin has national title aspirations but if they want to make the college football playoff, they are going to need to beat a Michigan at the Big House. The Wolverines also have national championship aspirations themselves.

Clemson at Florida State, Oct 27th: The best rivalry in the ACC will more than likely determine who ends up in Charlotte and whether or not the ACC has a representative in the college football playoff.

Auburn at Georgia, Nov 10th: Georgia will look for revenge after getting beat soundly at Auburn last season. This game will have SEC and national implications as well.

Wisconsin at Penn State, Nov 10th: Another tough game for Wisconsin. If the Badgers come into this game undefeated, they could be playing for a spot in the Big Ten title game and possibly a playoff spot.

Michigan at Ohio State, Nov 24th: The Wolverines and Buckeyes will look to write the next chapter in the best rivalry in all of sports There will be a lot on the line in this game as usual. It’ll be a slugfest.

Auburn at Alabama, Nov 24th: It’s the Iron Bowl. What else needs to said? A spot in the SEC Championship game and the college football playoff will more than likely be on the line.