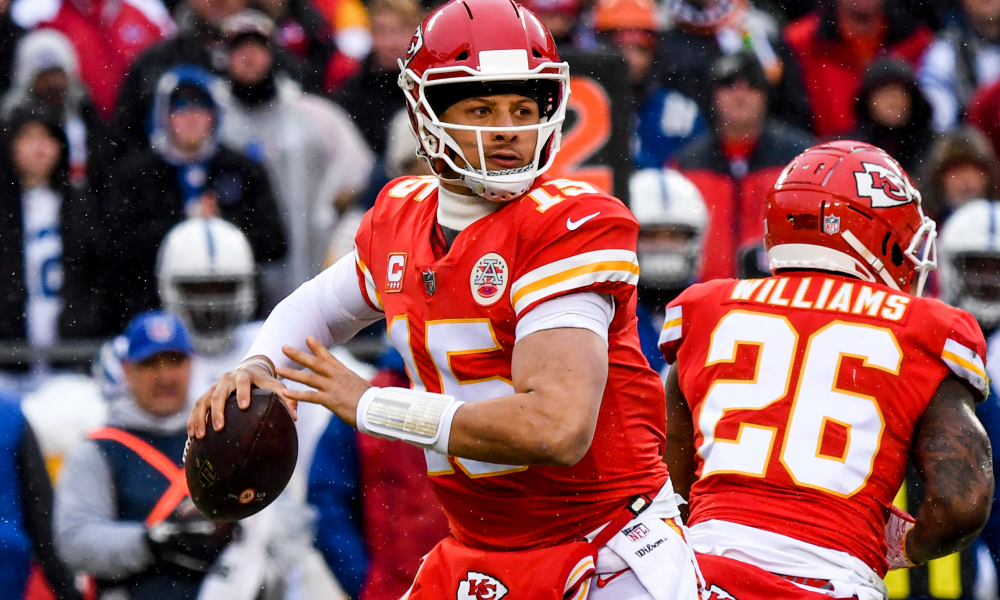 The Patriots will have their hands full but they will be ready. Here is what you need to know about the Chiefs.

Offense: Quarterback Patrick Mahomes had a season for the ages throwing for over 5,000 yards and 50 touchdown passes. Mahomes possess plus arm strength, athleticism and the ability to extend plays out of the pocket. he makes a lot of unscheduled plays.

Mahomes puts opposing secondaries in a bind because of his ability to extand plays. If cornerbacks or safeties fall off of their coverage responsibilities to defend him, Mahomes flicks the ball over their heads for a big plays. He feasts on undisciplined defenses that run around out of position.

Losing Kareem Hunt was a big blow to this offense but the Chiefs haven’t skipped a beat with Damien Williams, Spencer Ware and Charcandrick West. Williams especially has emerged as a dual threat weapon that can run the football and is a threat in the passing game.

Kansas City can’t “pound the rock” per say but Andy Reid is a creative play designer so he will find ways to run the ball with his backs and wide receiver Tyreek Hill.

Speaking of Hill. He headlines an explosive receiving corp that can create separation down the field and make big plays in the passing game. All of the Chiefs receivers are good in the scramble drill and know how to break off routes and adjust when Mahomes is on the move.

Hill gets all the attention but Chris Conley, Sammy Watkins, Demarcus Robinson and Kelvin Benjamin are all capable of creating mismatches and putting the Patriots secondary in a bind.

Tight End Travis Kelce  is the standard at his position today. He is an effective blocker who takes good angles and gets into proper position. He is also the best receiving tight end in the league.

Kelce is a match up nightmare because the Chiefs do a great job of moving him around in formations to free him up. Nickel corners can’t match up with him because he’s too big. Safeties struggle with him because he is too fast vertically. The Patriots will try a variety of ways to defend Kelce but there is really no way to take him out of the game.

The Chiefs offensive line has been good this season. They do not get a lot of publicity but this group has paved the way for the league’s number one offense. Left tackle Eric Fisher has played well this season and anchors this veteran group.

Defense: The Chiefs are a 3-4 base defense in theory but defensive coordinator Bob Sutton uses a variety of fronts, stunts and pressures to get after opposing quarterbacks. Outside linebackers Justin Houston and Dee Ford get most of the attention because they are so disruptive as pass rushers, but the Chiefs are good inside as well with Chris Jones and Alvin Bailey. Jones is an emerging star. He can play the three technique defensive tackle or five technique defensive end depending on the front called. He is a nightmare to deal with one on one because of his size and length. Inside linebackers Reggie Ragland and Anthony Hitchens are both solid run defenders who can play all three downs depending on what sub package the Chiefs are in. It is a given that the Chiefs will get pressure with Houston and Ford but how the Patriots deal with Jones inside will go a long way in determining how they protect Brady.

The Chiefs secondary has struggled at times this season and with Eric Berry more than likely out of Sunday’s game, the Chiefs corners will be under pressure to make sure they hold up against Tom Brady and the Patriots passing game. Cornerbacks Steven Nelson and Kendall Fuller have played well on the outside but nickel corner Orlando Scandrick and dime corner Tremon Smith have struggled at times. Kansas City plays a lot of man to man coverage especially on short and medium down situations. I don’t see them being any less aggressive in this game. They are going to want to disrupt Brady’s timing in the pocket with their pass rush and re-route the Patriots receivers.

Special Teams: Kicker Harrison Butker has been terrific for the Chiefs this season. He was 24 of 27 on field goals and 65 of 69 on extra points. Butker’s range is about 62 yards and he has proven that he can make a big kick when necessary. Butker is also a weapon on kick-offs. He drives the ball vertically and his ball jumps on returners quickly. Speaking of returners. Tyreek Hill returns punts which means the Patriots are going to have to punt to the sideline. Expect the Chiefs to play around with two returners depending on where on the field the ball is.

Coaching: Andy Reid is the best offensive coach in the game today. He is innovative and gets more out of his talent than any other offensive coach in the league. Game management can still be an issue but Reid has managed tight games well this season. The Chiefs coaching staff is experienced and well versed on how Reid wants to play in all three phases. Defensive coordinator Bob Sutton and special teams coordinator Dave Taub are veteran coordinators who have been with Reid for a long time. The Chiefs staff is on par with the Patriots staff from an experience standpoint.