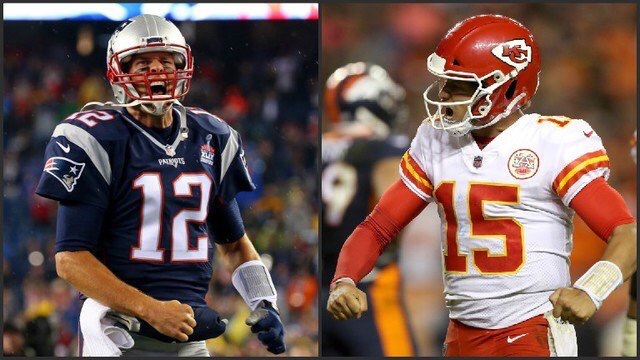 The AFC Championship game will be a match up of the old guard versus the new guard if you will. It will feature the largest age gap between staring quarterbacks in a championship game in NFL history. Tom Brady is 41, Patrick Mahomes is 23.

While the Chiefs may have home field advantage, the Patriots have some positional advantages.

Here is how the two teams match up by position and which team has the advantage.

Quarterback: Patrick Mahomes has had a season for the ages throwing for over 5,000 yards and 50 touchdown passes. That is impressive but guess what, Tom Brady has also done that in his career.

Mahomes is a unique talent because he is athletic, has plus arm strength and can make unscheduled plays out of the pocket. He has the potential to be an elite, top five quarterback moving forward.

Brady is simply the greatest of all time. I don’t need to remind of his resume. You already know it. I don’t buy into the notion that Brady has “fallen off a cliff” Did he have a down season by his standards, sure but he is still the standard bearer at the position. Absolutely.

When looking at this match up, it is pretty even for me. Mahomes has the talent and youth advantage. Brady has the toughness and experience advantage: Advantage: Even

Running Backs: The Patriots have a distinct advantage at running back. Had Kareem Hunt still been with the Chiefs, I would have given them the edge.

Sony Michel, James White and Rex Burkhead give the Patriots a clear edge at the position. Damien Williams has done an admirable job filling in for Hunt. He has been terrific in fact but Williams won’t win this game for Kansas City. Michel and White can for the Patriots. Advantage: Patriots

Wide Receiver: I am going to give the Chiefs the edge at wide receiver because of Tyreek Hill. Hill is explosive and the Patriots have had a difficult time containing him in the last two match ups between these teams.

Sammie Watkins, Chris Conley and Demarcus Robinson complement Hill well and they take advantage of the one on one match ups they get as a result of all the coverage he atteacts.

Julien Edelman was vintage Edelman last week catching 9 passes for 151 yards. He is a big game receiver who rises to the occasion in the playoffs. Chris Hogan has been a disappointment this season and will need to play well today to compliment Edelman.

The Patriots passing game is at its best when all of the skill positions are involved. The Chiefs are similar in the way they design their passing game. Despite that, the receiving corps for both teams will play a big role in this game. Advantage: Chiefs

Tight End: The Chiefs have the advantage at tight end with Travis Kelce. I know it is hard to imagine another team’s tight end having the advantage but Rob Gronkowski is a shell of the player he once was. He only caught one pass last week in the Patriots win over the Chargers.

Kelce on the other hand has developed into a match up nightmare, especially in the middle of the field. Defenses have had a hard time matching up with him because if you stick a nickel corner on him, he’s too big. If you put a safety on him, he’s too fast. The Patriots will face this conundrum today.

Of course Gronkowski could have a big game today as well. Just because he’s not the player he has been in recent years, doesn’t mean he’s still not tough to match up against. Regardless, the Chiefs have the advantage at this position right now. Advantage: Chiefs

Offensive Line: I give the edge along the offensive line to the Patriots. They have been more consistent this season and they are the better running blocking unit.

The Chiefs offensive line has gotten the job done this season and they’ll get a big boast with the potential return of right guard Laurant Devernay Tardif today.

Despite LDT’s return, this group has struggled in pass protection. Patrick Mahomes was sacked four times last week. The Patriots have an anemic pass rush but they’ll get to Mahomes today. Advantage: Patriots

Defensive Line: The Chiefs have a slight advantage along the defensive line and that is because they are better on the interior with Chris Jones, Alvin Bailey and Derrick Nnadi. The trio sacked opposing quarterbacks 15 times this season. Jones is a budding star and is virtually unblockable at times because of his length and quickness.

Malcolm Brown, Danny Shelton and Adam Butler get the job done for the Patriots but they don’t impact the game like Jones, Bailey and Nnadi do. The Patriots will need a big game from defensive end Trey Flowers and the rest of their edge rushers if they want to win today. Getting consistent pressure on Mahomes will be key. Despite that, I give the edge to the Chiefs up front. Advantage: Chiefs

Linebackers: I think both linebacking units are terrific. They are different in terms of what they do however. The Chiefs operate out of a 3-4 defense so they rely on Justin Houston and Dee Ford to generate edge pressure.

The Patriots conversely are a 40 base front and blitz from depth more. They use outside linebackers Dont’a Hightower and Kyle Van Noy in a variety of different ways in their sub packages.

The chess match that will be played with the linebackers today will be fascinating. They will impact this game in a big way. Advantage: Even

Secondary: The Patriots are aggressive in the secondary. They play a lot of pure man to man and match up zone. That has proven to be risky against the Chiefs and we saw this first hand in the first meeting between these teams.

As far as who has the edge, I don’t think either secondary has the advantage over the other. Both units will need to play well today for their respective team to win. Advantage: Even

Coaching: Bill Belichick gets the edge every time. He is 6-2 in his career against Andy Reid. Reid has done a fantastic job of building the Chiefs and designing an offense that suits his skill players talent. With that said, Belichick has a distinct advantage in terms of game management and adjustments. Advantage: Patriots

Match ups will go along way in determining the outcome of this game. Having homefield is a big advantage for the Chiefs but in the end, the game is won by coaches and players. The Patriots can win this game.