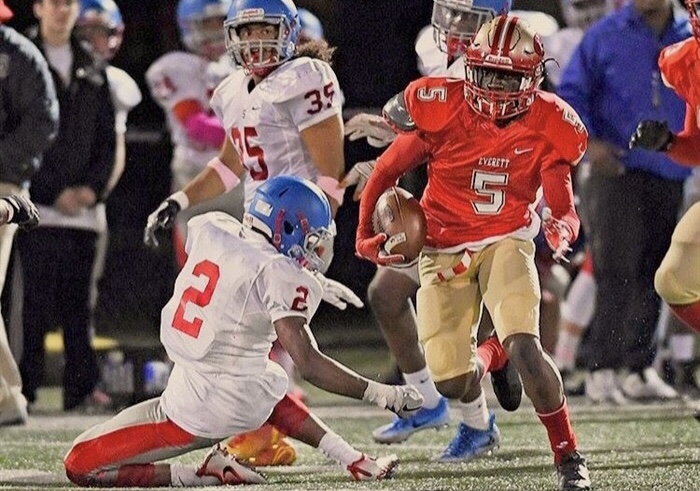 It was another banner year for Massachusetts in recruiting. Here is a list of the top prospects in the Class of 2019 and where they signed. (Click on each players name to see their highlight films)

Grant Laws, DT, Xaverian – UMass: Laws is stout and can align in multiple techniques along the defensive line.

Jared Martino, RB, Cheshire Academy (CT), UMass: Martino is a good athlete. He is explosive in the open field

Xavier Gonsalves, TE/DE Mashpee, UMass: Gonsalves has the length and snap get off to be a very good player at the next level.

Wilson Frederic, DT, Everett, UMass: Walt Bell and his staff continued to stock pile local talent at the defensive line. Frederic was a very good player who some felt went under recruited.

Mike Sainristil, ATH, Everett, Michigan: Sainristil is an explosive athlete who has a chance to play as a freshmen.

Mike Ciaffoni , DT, Lincoln-Sudbury, Boston College: Ciaffoni projects as a defensive tackle at B.C because of his frame

Quin Stott, ATH, Governors Academy, Boston College: An undersized running back, slot receiver who is explosive and can make plays in space. Stott has kick return value as well.

Lewis Cine, SS, Trinity Christian (TX), (Everett), Georgia: Cine is a specimen. At 6-2 220, he has elite height, speed talent and the potential to develop into one of the top defensive players in the SEC.

Kevin Brown, RB, Everett, UMass: A big back who runs with good balance and power. Ideally suited for a timeshare with a smaller back.

Bryce Gallagher, MLB, St. Sebastian’s, Northwestern: The second Gallagher to go to Northwestern from St. Sebs in the last three years. Bryce has as much potential as his older brother Blake.

Quinn Murphy, OL, Duxbury, Notre Dame: Murphy is a Notre Dane type lineman. He has the length to play right tackle but he can also kick inside to guard.

Zukudo Igwenagu, DB, Worcester Academy, Rutgers: A versatile defensive back who is athletic and can line up anywhere in the back seven defensively.

Kevon Darton, DT, Worcester Academy, Syracuse: Explosive on the snap, Darton moves well in all four directions and align in either a shade or a three technique. Played a little fullback as well.

Zach Magdis, S, Worcester Academy, Shepherd Hill, Syracuse: A hybrid OLB, safety who has the coverage skills and athleticism to play over the top and the toughness to screw down in the box as the eighth defender.

Andy Elkins, WR, BB&N, Wake Forest: Elkins was unheralded at times but he is athletic, runs good routes and can separate after the catch. High I.Q player.