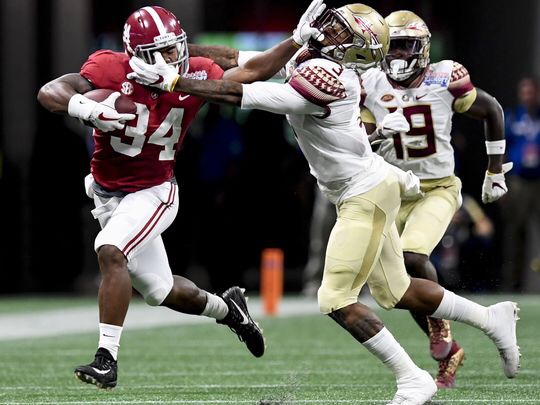 The Patriots surprisingly drafted Harris with pick 87 in the third round. On paper, the Patriots are deep at the running back position with Sony Michel, James White, Rex Burkhead and Brandon Bolden. The Patriots won’t carry six running backs plus a fullback so you would have to think that one of the back currently on the roster would be the odd man out with Harris in the mix.

Here is our scouting report on Harris.

Inside Runner: Harris is ideally suited to run inside the tackles. He runs with good balance and power. He can pick and slide at the line of scrimmage and accelerate into the second level. Harris shows good vision and can identify and make a cut quickly.

Outside Runner: Harris runs Power O and Power G well because he has the ability to take the hand off, work to the sideline and either stick it in C gap or cut up into A gap. Harris doesn’t hit it fast to the outside. He shows good patience but he is not quick to hit it off tackle and bounce it outside.

Elusiveness: Harris has some ability to create separation in space but he is not going to make guys miss. That’s not Harris’ game. He prefers to put his shoulder down and run a defender over.

Power Runner: Harris is your prototypical power back. He has good size, he runs with good balance and stays square. Harris has a thick lower half which enables him to break tackles on contact.

Blocker: Harris is an average blocker in pass pro. He stays square, punches inside and keeps his feet but he has to do a better job of recognizing defender movement and taking better angles.

Hands/Routes: Harris has shown he can run good routes and has good hands. He is not a natural receiver. Harris does not do a good job of catching the ball and getting upfield. He has a tendency to lock on the ball and not create separation in space.

Durability: There is plenty of tread left on the tires with Harris. He only carried the ball 477 times in four years.

Running Style: Harris is a power runner, plain and simple. He is at his best running in between the tackles.

Final thoughts: The Patriots obviously rated Harris high on their draft board. Harris is a good fit schematically and he will complement Sony Michel and James White well. As I mentioned earlier, the Patriots will not carry six running backs so it will be interesting see how this plays out.