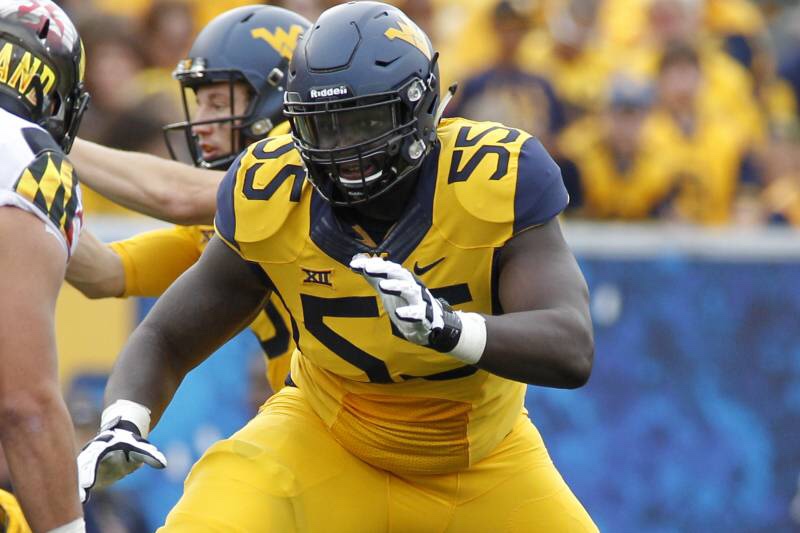 West Virginia offensive tackle Yodny Cajuste was taken with pick 101. It was a compensatory pick at the end of third round.

At 6-5 312, Cajuste has a lot of upside physically but he is also one of the most frustrating players in this draft in that he runs hot and cold and can be inconsistent.

Here is our scouting report on Yodny Cajuste.

Initial Quicks: Cajuste comes out of his stance quickly but he has a tendency to come out high at times and as a result he allows defenders to get their hands on him.

Run Blocker: Cajuste consistently covers up defenders on reach and outside drive blocks. He runs his feet and maintains leverage and control. Again, he comes out of his stance high and as a result he gets stacked and stalled at the line of scrimmage.

Pass Blocker: Cajuste sets up quick, has good feet and moves laterally with ease. Mirrors and slides effectively and he can punch and sustain. He does not lose hand placement once he’s locked on. Cajuste does have a tendency to get caught off balance and he struggles to anchor down against bull rushers who can push back and get into a double move. Cajuste needs to learn to play with more balance and stay under control.

Pull & Trap: Cajuste is athletic. He moves well laterally. He can open, accelerate and get up the hole quickly. Again, needs to play with a lower pad level.

Hand Use: Cajuste uses hands well. He has quick hands. He can punch, recoil and reset. Cajuste does a good job sustain hand placement in the run game.

Strength: Cajuste needs to develop more physically. He struggles at times on one on one blocks because he is not strong enough to anchor down and hold the point.

Explosion: As I mentioned earlier, Cajuste gets off the ball quickly but he is too high out of his stance. He lacks elite explosion which is paramount when playing left tackle.

Final Thoughts: Cajuste has the physical tools to be a starting left tackle in the NFL. He needs a lot of work fundamentally but he will be playing for the best offensive line coach in the NFL in Dante Scarnecchia. Scarnecchia will make him a player.