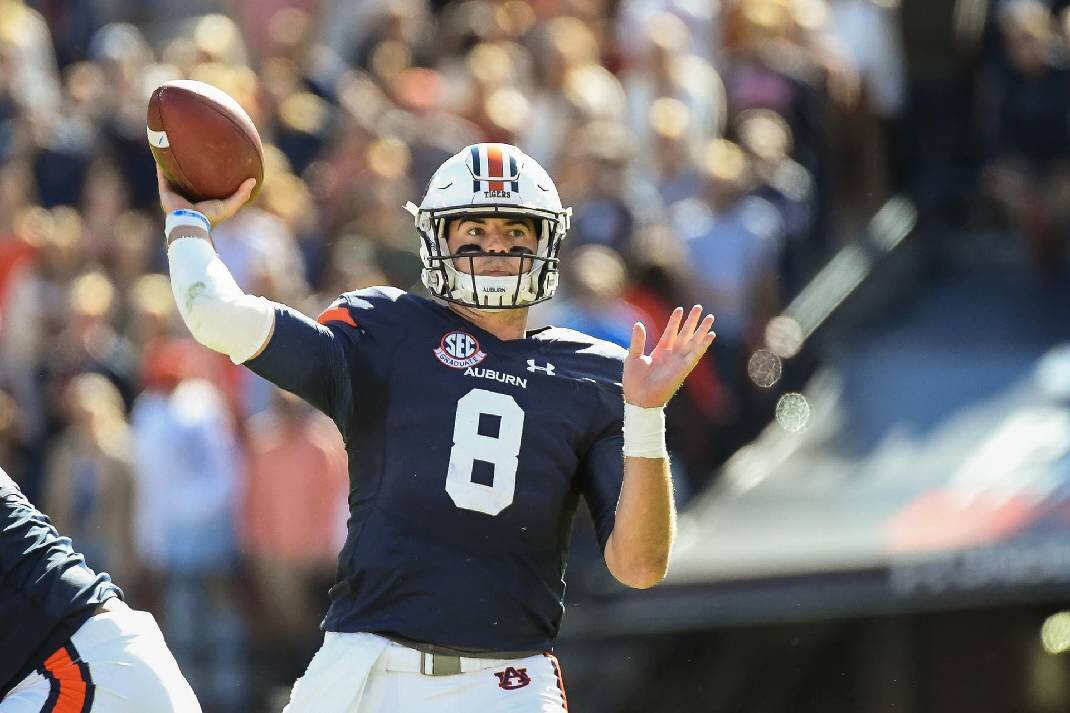 The Patriots drafted another quarterback and the question will be asked around New England. Is this Tom Brady’s successor? No one knows but what we do know is, Stidham is the fourth quarterback the Patriots have drafted in the last five years. Jimmy Garoppolo, Jacoby Brissett and Danny Etling are the others.

Bill Belichick is once again trying to find a quarterback that the organization can develop into a future starter. Stidham has the tools to be a starting quarterback in the NFL.

Stidham has plenty of physical tools but after an up and down 2018 season, he lacks confidence. He needs to be reinvented and is going to the perfect place to be coached up.

Here is our scouting report on Jarrett Stidham

Arm Strength: Stidham might be the most naturally gifted passer in this draft along with Missouri’s Drew Lock. He can make every throw in all three levels and he can add and subtract in terms of his velocity. Stidham throws the deep ball well. He has enough arm strength to connect on an opposite hash comeback route consistently.

Drop: Stidham is a good athlete. He is smooth and fluid in his drop out of shotgun. Like most quarterbacks today, he will have to learn to take drops from under center. He should have no problem getting to the top of his drop because he is athletic.

Accuracy: When he has time to set his feet and deliver, Stidham displays good accuracy in all three levels. He can fit the ball into tight windows against zone coverage and does a good job leading receivers versus man coverage. Stidham’s accuracy declines however when he has to work through a cluttered pocket. He has a tendency to throw the ball into double coverage when hurried.

Field Vision: Stidham is tall at the top of his drop. He shows good pocket awareness and a willingness to process and go through his progression. He made a lot of quick decisions because of the nature of the offenses he played in at Baylor and Auburn. He will have to hold the ball longer in the NFL.

Runner: Stidham is a good athlete. He was the number two dual threat quarterback in the country coming out of high school in 2015. He has the ability to evacuate the pocket and extend plays when things break down.

Delivery: Stidham has a smooth,efficient delivery. He gets the ball out quick and on time. His release point is above his shoulder on deep throws and leveled on quick and underneath throws.

Ball Handling: Stidham is smooth and fluid. When he has time, his actions and movements look the same.

Leadership: Stidham is a confident quarterback who gets his teammates to believe in him. He is not the most quarterback in the country but he has good command of the offense, knows where everyone should be and leads by example.

Final Thoughts: Stidham had the look of a first round pick in 2017 but after a tumultuous 2018, his stock dropped. Some will blame Gus Malzahn and his system and others will blame Stidham. The bottom line is, Stidham regressed regardless of how it happened. He is going to a great situation in New England. He will learn from Belichick, McDaniels and Brady and will become a better quarterback. The physical tools are in place. Stidham just needs to turn it around now.