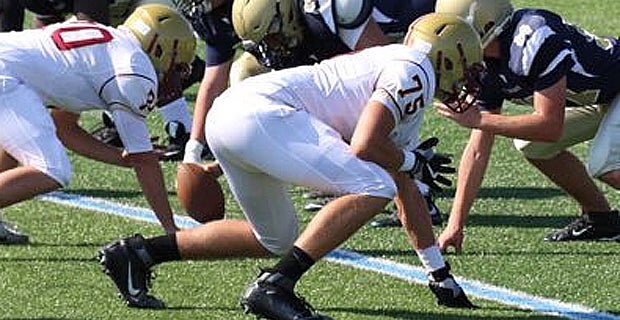 At 6-8 280, Trapilo is long and athletic. He is explosive off the ball defensively and can create separation with his get off and length. Trapilo has the physical tools to be a three defensive lineman who can play outside as a 9 or 5 technique defensive end and kick inside on obvious passing downs.

Trapilo has good feet and he moves well in short areas. He is an above average pass blocker who can cut the edge off a speed rusher and anchor down versus a bull rusher. Trapilo has a 6-9 wingspan which is an added benefit when playing tackle.

Trapilo was being recruited by some of the top programs in the country and had 17 offers when he committed to Boston College. Michigan, Nebraska, Syracuse, Virginia, Wake Forest and Georgia Tech were among the other FBS schools that offered Trapilo.

Getting a commitment from Trapilo was huge for Steve Addazio and his staff. Massachusetts is being recruited heavily by other big time FBS programs these days, most notably Michigan. The Eagles don’t have first dibs on all the talent in the area. Landing a commitment from Trapilo however proves that the Eagles are still firmly entrenched in Massachusetts and that they can compete for the top players in the state.