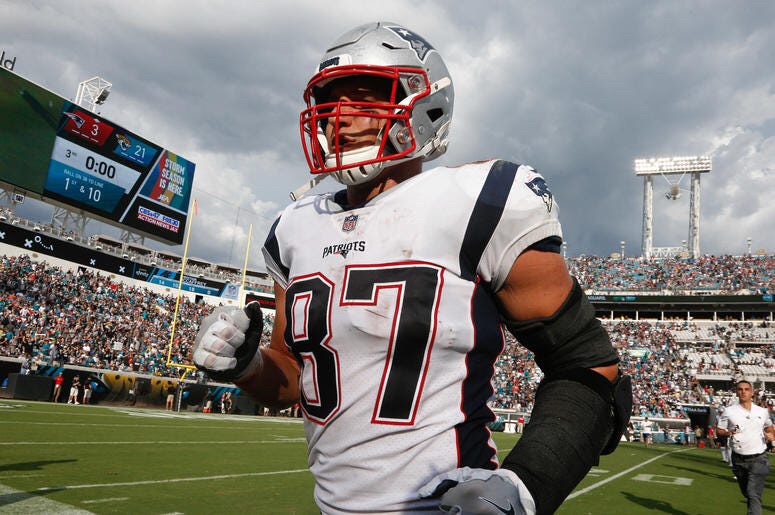 When Rob Gronkowski announced his retirement on March 24th, I felt at the time that he was done. I never thought he would play again. The injuries had taken their toll and at the age of 29, Gronkowski decided to walk away while he can.

Since Gronkowski announced his retirement however, there has been growing speculation that he would return to the Patriots at some point this season. Despite losing weight and maintaining that he retired, Gronkowski continues to work out and is in good shape.

Earlier this month, a report suggested that some members of the Patriots organization believed that Gronkowski would indeed be back. The report was somewhat validated when Gronkowski was spotted catching passes from Brady on the campus of UCLA this past weekend.

Gronkowski did little to quell the speculation after telling Drew Brees on red carpet at the ESPY’s last night that he is “coming back.” We don’t exactly know if Gronkowski was referring to playing again but as we learned with Kyrie Irving and Kevin Durant, when superstar athletes are talking to each other in public, it’s usually about business.

Gronk and Brees chopping it up on the red carpet #ESPYS pic.twitter.com/iDioPoqbNS

Something tells me the Patriots think he will be back too. Bill Belichick didn’t exactly panic when he found out that Ben Watson would be suspended for the first four games of the season for PED use or when Austin Sefarian Jenkins had to step away for personal reasons.

As of right now, the Patriots are starting the season with Matt LaCosse, Stephen Anderson, Ryan Izzo and Andrew Beck as their tight end group. That is not exactly an “elite” collection of talent.

At the risk of sounding like Johnny Come Lately, I am jumping on the Gronk is coming back wagon. I am fully committed. I believe we will see Rob Gronkowski in a Patriots uniform this upcoming season.