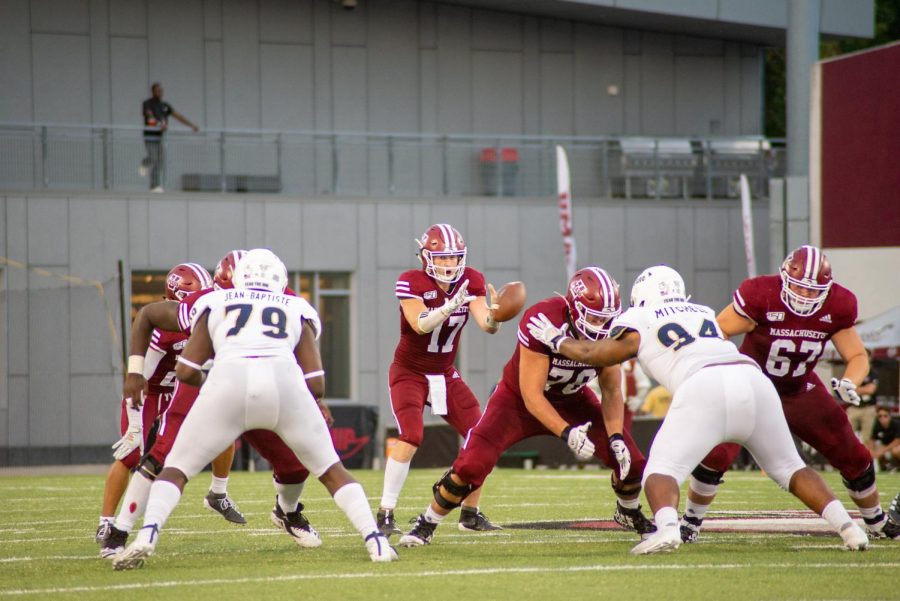 I must admit that I was one of those people who didn’t think UMass would win a game this season. Why would anyone think otherwise? Aside from a fast starting first quarter against Rutgers in the season opener, the Minutemen have been awful. Defensively, they were on pace to shatter school and national records for ineptitude. Then Akron visited McGuirk Stadium on Saturday and we were reminded that the Minutemen might not be so bad after all.

UMass defied the proverbial odds and beat a program that was on par with them. They won a game. Not just any game. It was first year head coach Walt Bell’s first win. A program has never needed a win as badly as UMass needed this one. It has not been an easy start to Bell’s tenure. Talk has centered around a lack of talent and fans and alumni alike have pondered the future of the program. Many have speculated that it might be time to drop down to FCS or drop the program.

None of that matters now however. Wins have a way of changing the mentality of a program. They validate had work and a belief in culture. Bell told his players as much in his post game speech. It was a tumultuous week for the program after Bell suspended six starters. Despite that, the Minutemen won this game and the players believe now. They believe they can win. Belief after all is a key ingredient in turning a program around.

The Minutemen’s schedule sets up nicely for them. They can capitalize on this win and build on it. The first step in doing that is a trip to Florida International this weekend. Butch Davis’ Panthers have struggled this season. UNH went toe to toe with them two weeks ago before dropping a 30-17 decision. UMass can not only play with FIU but dare I say, they could beat them.

We really don’t know if Walt Bell is the right guy to turn this program around long term. If he and his staff recruit well, beef up the talent and Bell actually sticks around, UMass might be competitive again. That is two or three years out however which can be an eternity in college football. Regardless of what happens down the road, this program has a long way to go. Saturday’s win is a starting point.

It is hard to believe that beating the Akron Zips would be considered a big win but it is. Especially for a program trying to find it’s way and rebuild again. The Minutemen have a long way to go but Saturday must have felt good.