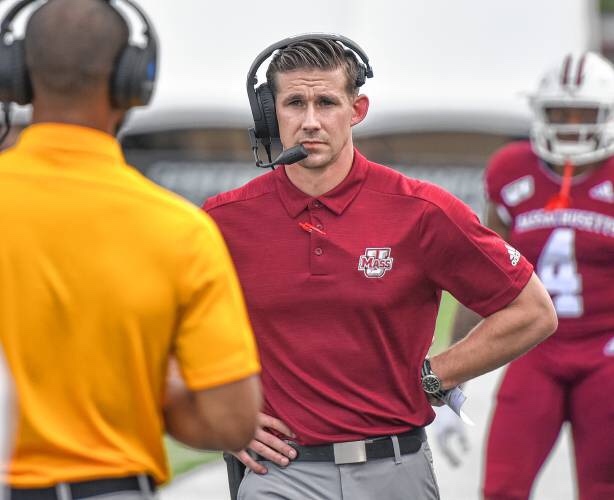 Walt Bell’s emphasis on culture finally paid off this week in a win over Akron.

UMass stole the headlines last week after securing their first win of the season over Akron. It has been a lost season thus far for first year coach Walt Bell and the Minutemen so it was nice to see the players and coaches celebrate after the win.

Here are some thoughts on the week that was in Division One college football in New England.

1.Some people have been hesitant to be critical of Boston College head coach Steve Addazio but the fact of the matter is, coaching cost the Eagles their game against Wake Forest. You win and lose as a team but at some point the head coach has to accept responsibility. I am not saying Addazio should be fired but he shouldn’t be immune from criticism either.

2. Walt Bell referenced culture at the end of his speech after UMass‘ win over Akron. Bell said that “culture won” today. He was right. Culture did win. Hours after suspending six starters, his team stood up for their coach and themselves and won a game. It was proof that culture matters and in many ways, it trumps talent.

3. Harvard thumping Brown 42-7 is not a surprise. What is a surprise is how easily they shut down E.J Perry. The Crimson defense played very well.

4. It wasn’t pretty but UNH made it two in a row with a 23-6 win over Duquense. Senior running back Evan Gray once again led the way for the Wildcats rushing for 99 yards on 10 carries. Gray has been a revelation for the Wildcats and has become the centerpiece of their offense.

5. URI lost 31-27 to a good Stony Brook team. The Rams once again played well offensively but they continue to struggle defensively, especially in the second half of games. They head into this week’s game against Brown at 0-4. It is always a battle with the Bears and expect no different this week as the two teams do battle for the Governor’s Cup.

6. Dartmouth improved to 2-0 after thumping Colgate 38-3. Senior quarterback Jared Gerbino played well completing 12 of 16 passes for 193 yards and three touchdown passes. The Big Green have the look of a team that is poised to win the Ivy League. They certainly have the talent.

7. Holy Cross was physically dominated in a 41-3 loss to Syracuse. It is good for the Crusaders to play games like this because it benefits the program financially and enhances their national profile but they will be tough to win.

8. Merrimack just couldn’t get anything going offensively in a 10-3 loss to Lehigh. The Warriors have been wildly inconsistent offensively this season.

9. After a great offensive performance the week before against Brown, Bryant only managed 6 points in a tough loss to St. Francis. Conversely, the defense played much better which is encouraging.