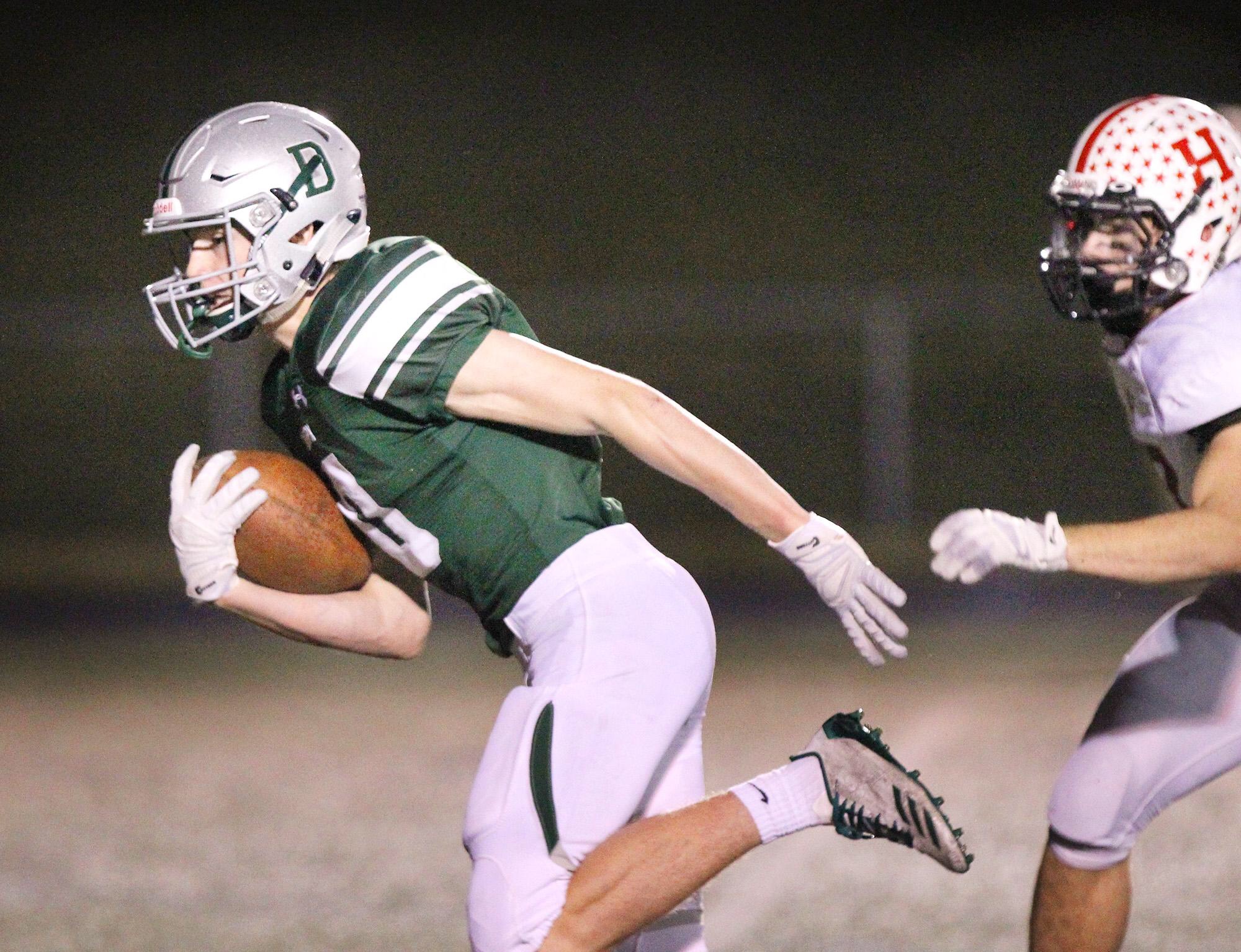 Do it all quarterback Will Prouty had a big game for Duxbury Friday night versus Hingham. Photo courtesy of Gary Higgins/Patriot Ledger

Week 4 didn’t as many impact match ups as we’ve seen thus far in the high school football season but there were still some key match-ups. Here are my thoughts on the week that was.

1.Central Catholic survived over North Andover 33-26 but the Red Raiders are down six starters and may have a difficult recovering from these player losses moving forward.

2. King Philip 26 Franklin 14. New year, same result. The Panthers are on the rise but until they figure out a way to match up with KP physically, they cannot contend for a Kelley-Rex title in the Hock.

3. Duxbury is officially back after trouncing Hingham 41-20. Moving Will Prouty to quarterback was a stroke of genius by coach Dave Maimaron. The Dragons are now the team to beat once again in D3 South.

4. Brockton hung with Everett for a half but ran out of gas in a 36-21 loss. The Boxers are having major problems on defense. They just cannot seem to match up with teams like Everett that have big play ability.

5. We knew that Doherty was back but the Highlanders needed a marquee win to validate the hype, Beating a good Shrewsbury team validates the hype and proves that Doherty is legit.

6. Wellesley outlasted Newton North 33-30 on Saturday in what was the best game of the weekend. Both teams are talented and could be a factor in their respective divisions come playoff time. No one is talking about Wellesley in D2 South but at 4-0, they are a legit contender and could make a run. Saturday’s game against Natick will be the barometer of how far this team can go.

7. Speaking of Newton North, you can help but be impressed by senior quarterback Andrew Landry. Landry threw for 270 yards and three touchdown passes on Saturday. He has thrown for 635 yards, 11 touchdown passes and 0 interceptions in three games thus far this season. Landry is an FBS talent. At 6-5 205, he has the size and the physical tools to get an offer.

8. Milton is off to a 3-0 start after their win over 33-14 win over Walpole. Division 4 South is arguably the weakest bracket in the state. The Wildcats are once again primed to make another deep playoff run.

9. Melrose has been absolutely dominate in wins over Malden, LS and Wilmington. They have a tough test this week in Stoneham.

10. Kudos to first year coach Manny Lopes who has the Norwood Mustangs off to a 2-1 start after their 29-22 win over Westwood on Saturday.