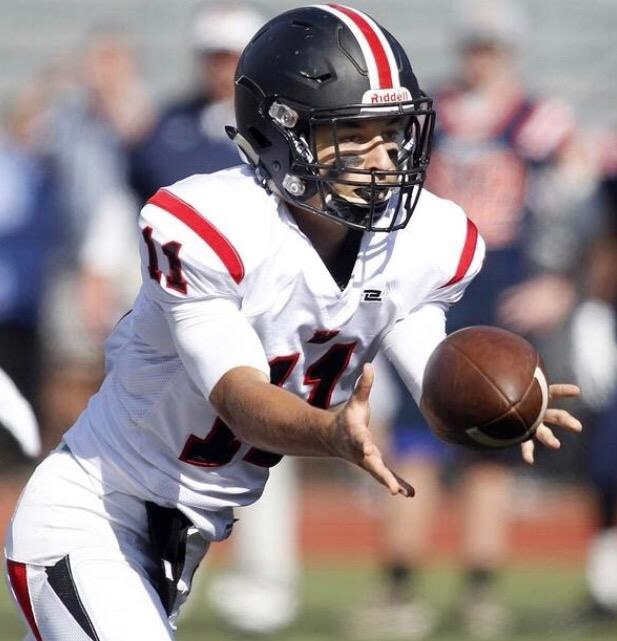 Matt Maiona and the Wellesley Raiders cracked our top 25 this week.

Let’s get right to it. Here is my top 25 for Week 4. The rankings have changed dramatically this week and with some big games on tap for this weekend, expect more changes next week.

1. Catholic Memorial (4-0): The Knights cruised to an easy win over Malden Catholic. A trip to Xaverian is on tap for this week.

3. Everett (3-1): A win over Brockton isn’t what it used to be but it is further proof that this program is almost back.

4. Central Catholic (2-1): The Red Raiders earned a big win over North Andover but it came at a price. They are now down six starters.

5. Natick (4-0): The Redhawks cruised past Braintree but a much stiffer test awaits this week with a trip to Wellesley.

6. King Philip (3-0): After a big win over Franklin, the Warriors face bitter rival Mansfield with league and playoff implications on the line.

7. Mansfield (2-1): The Hornets whacked Taunton and travel to Wrentham this week to battle arch rival King Philip in a game that has enormous implications.

8. Springfield Central (1-2): The Golden Eagles had a bye and return to action this week.

9. Wachusett (3-0): The Mountaineers continue to climb cracking the top ten this week. They are a legit threat to make a deep run in Central, Mass.

10. Holliston (3-0): The Panthers keep rolling along after their win over Medfield.

11. Barnstable (2-1): The Red Raiders had a bye. A tough New Bedford team awaits this week.

12. Doherty (3-0): The Highlanders picked up a huge win over Shrewsbury and move up in our rankings in the process.

13. St. John’s Shrewsbury (1-2): The Pioneers were off last week. They host Shepherd Hill this week in a huge Central, Mass tilt.

14. Xaverian (1-2): The Hawks had a bye which means they had two weeks to prepare for this week’s monster game against CM.

15. Melrose (3-0): Melrose has been absolutely dominate and look like the best team in D4 North.

16. Marblehead (3-0): The Magicians are making opposing offenses disappear. In all seriousness, this team is good and poised to contend for a state title.

17. Methuen (3-0): The Rangers are skilled and tough. A difficult program to play against.

18. Tewksbury (2-1): The Redmen are back after beating B.C High 18-14. They won the same way they always do. Multiple formations and running the ball.

19. Canton: The Bulldogs looked impressive in a 10-0 win over Stoughton. They host a tough Foxboro team Friday night.

20. Wellesley (4-0): The Raiders make their appearance in the top 25 after an impressive overtime win over Newton North. The annual showdown with Natick looms this week.

21. Nashoba (3-0): A big win over Leominster is a reminder that Nashoba is the favorite in D4.

22. Franklin (2-1): Panthers drop after a tough loss to KP but look to bounce back against Oliver Ames this week.

23. Danvers (3-0): The Falcons are back and could make things interesting in D3 North.

24. Milton (3-0): Wildcats continue to be a forgotten team but they are the best team in D4 South.

25. Shrewsbury: Shrewsbury will still be a factor in Central, Mass despite tough loss to Doherty.