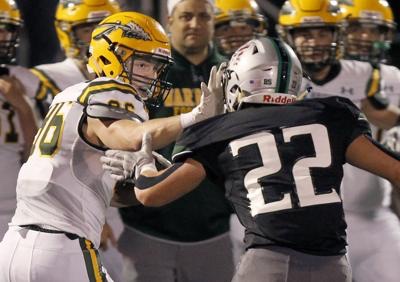 KP, Mansfield meet again with huge implications on the line.

Week 5 features several key match-ups with league and seeding implications. Here are our top games of the weekend.

#7 Mansfield Hornets (2-1) at #6 King Philip Warriors (3-0): The best game of the weekend. This has become the best rivalry in Eastern, Mass. KP has won six of the last seven meetings versus Mansfield. The Hornets return a lot of talent and experience from last year’s team. They are talented and tough. Mansfield is deep at running back with Vinny Holmes, Cincere Gill, Bobby Marciano and Mike DeBolt. All four can make a big play in the run. Defensively, the Hornets are fast and aggressive.

As for the Warriors, they returned to their roots a bit last week in their 26-14 win over Franklin. KP was able to survive a late Franklin surge by running the football in the fourth quarter and grinding away the clock. Per usual, the Warriors play great defense. They are only giving up 10.3 points per game.

Games between these two teams have been close the last two years and this one should be no different. The winner will win this game in the fourth quarter.

#1 Catholic Memorial Knights (4-0) at #14 Xaverian Hawks (1-2): Xaverian has had two weeks to prepare for this game so you have to think they’ll be ready. The Hawks will have their hands full with a CM offense that is clicking right now. Whether it’s the double wing or the spread, the Knights are moving the ball and finishing drives.

CM will want to turn this into a track meet while Xaverian will try to slow things down. Which ever team can establish their style early will take control of this game.

Stonehan Spartans (2-1) at #15 Melrose Red Raiders (3-0): Melrose looks unbeatable right now but they will have their hands full with Stoneham’s wishbone option offense. The only way the Spartans can stop Melrose’s high powered offense is by running the football and controlling the clock. If Stoneham ends up in long down situations and are forced to throw, it will be a long night.

#15 Barnstable Red Raiders (2-1) at New Bedford Whalers (3-0): New Bedford has been a pleasant surprise thus far but they haven’t played a team that is as physical and well coach as Barnstable.

The Red Raiders can pound the ball and wear opposing defenses down. New Bedford is going to have play fast and push the tempo because possessions will be at a premium tonight. We will see just how good the Whalers are. This is a true litmus test.

Leominster Blue Devils at #9 Wachusett Mountaineers: Wachusett continues to be the state’s best kept secret but they will be a secret no more if they can find a way to beat a Leominster program that might not be what they used to be but still produces, tough, physical kids. I expect this game to go down to the wire but Wachusett’s size and ability to run the football will be the difference.

#20 Wellesley Raiders at #5 Natick Redhawks (4-0) I have said all along that I think Natick is probably the most complete team in D2 South. My theory will be tested Friday afternoon when they take on Wellesley.

The Raiders are well coached and know this Natick program well. The Route 9 side of the Bay State League has come down to these two teams in recent years and this season should be no different. Expect another tight, well played game between these two long time rivals.

North Andover Scarlet Knights (1-2) at #18 Tewksbury Redmen (2-1): Tewksbury remembers what North Andover did to them last season and don’t think they’ve forgotten. Despite that, this North Andover team is too talented to get rolled. This will be a physical game that will come down to coaching and who makes mistakes. On the surface, the edge has to go toTewksbury being at home but it is hard to count out the defending D2 state champs. They know how to win games like this.