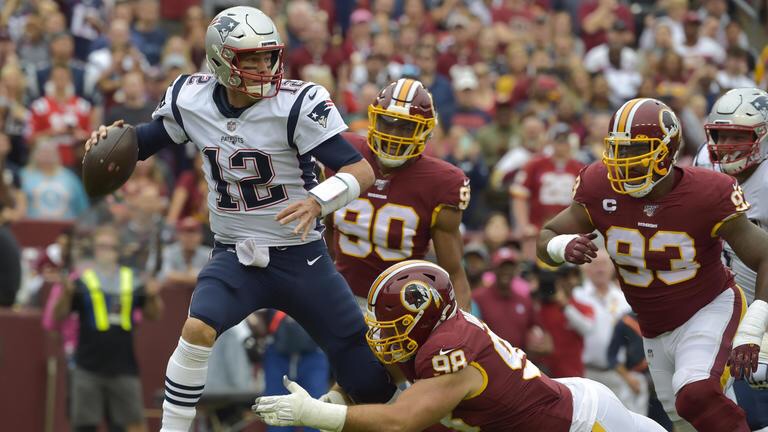 Game Rewind: After giving up an early touchdown to the Redskins, the Patriots rattled off 33 straight points in the blowout victory. With the win, the Patriots improved to 5-0.

1. Slow start once again: The Patriots got off to a slow start offensively despite answering Washington’s early score on the next possession. Tom Brady and company couldn’t get in sync but they found a rhythm late in the first half and were able to pull away in the second half.

2. Tom was terrific: Brady had a vintage Brady performance going 28 of 42 for 348 yards and three touchdown passes. Brady did throw an interception but aside from that, he was on point most of the afternoon and played well despite facing heavy pressure from the Redskins.

3. Defense dominates again: After giving up an early touchdown on a slot counter play, the Patriots defense settled in and took the game over. They sacked Redskins quarterback Colt McCoy six times and Jason McCourty picked McCoy off. It was another dominate effort by a defense that is playing at another level right now.

4. Pounding the rock! After getting off to a slow start, Sony Michel took the game over in the second half. Michel finished the day with 16 carries for 91 yards and a touchdown. Going into the game, we talked about the importance of running the football, the Patriots did that in the second half.

5. Tight ends get more touches: Look, Matt LaCosse and Ryan Izzo are never going to be confused for Rob Gronkowski but they are getting more involved in the passing game. Izzo caught 2 passes for 39 yards and a touchdown. LaCosse caught one pass for 22 yards. That is not insane production by any means but Brady is targeting them more which shows he has more faith in them.