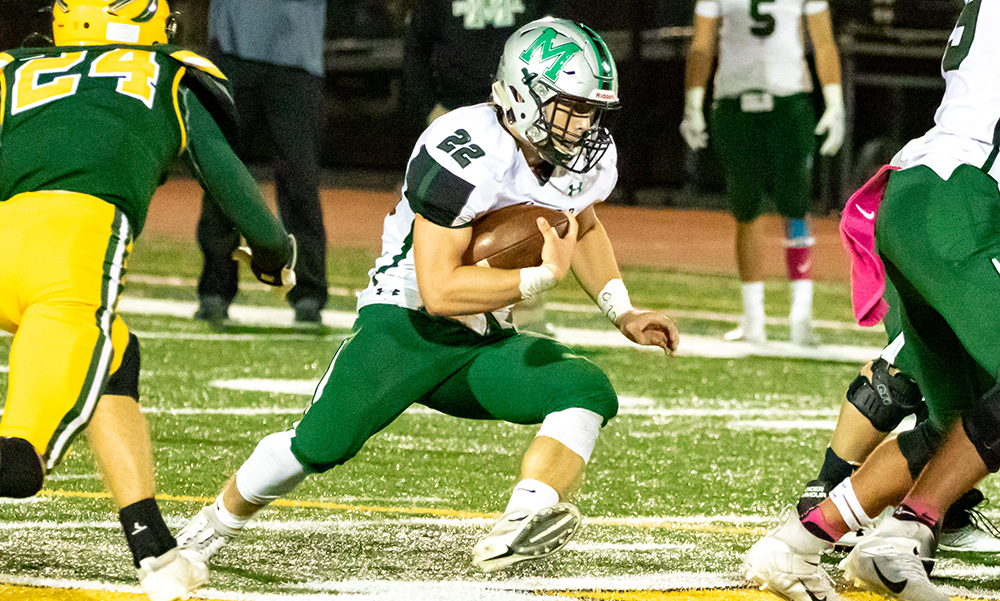 Week five featured some important games with long term implications. Here are my thoughts on the week that was.

1. Mansfield outlasted King Philip 15-13 in another classic between the two long time rivals. The story of the game was King Philip losing star running back Ryan Halliday to a thumb injury. The loss of Halliday impacted the Warriors offense greatly. They couldn’t consistently put drives together and Mansfield’s defense was able to hold them at bay.

2. Catholic Memorial dominated Xaverian and established themselves officially as the team to beat in D1 South. CM is just faster and more athletic and it showed Friday night.

3. Tewksbury once again reasserted itself as a favorite in Division 3 after its win over North Andover. The Redmen have proven that they can play with anyone in their division after beating Needham, B.C High and North Andover.

4. New Bedford improved to 4-0 after a huge win over Barnstable. The Whalers are the number one seed in Division 2 South and a legitimate threat to make a run.

5. Natick won a classic over Wellesley 14-13. Defense ruled the day but both teams are still built around their offense and that is why they will be in the mix in D2 South come November.

6.  Milford whacked North Attleboro 45-19 and in the process set up a huge game this weekend again Canton. The winner will more than likely win the Davenport division. Milford coach Anthony Vizakis got ejected from last week’s and will not coach. That is a huge blow to the Scarlet Hawks.

7. Melrose survived in a win over Stoneham. The Red Raiders are battled tested now, something that will come in handy come playoff.

8. Central Catholic proved that they are a deep program and their depth was the difference in a win over Andover. Central dominated the Warriors and in the process stayed in the picture to be a top three seed in Division One North.

9. Concord-Carlisle moved to 4-0 after a huge win over Wayland. The Patriots have flown under the radar but they are now a factor in the DCL Small.

10. St. John’s Prep, CM this weekend is going to be the biggest game of the regular season. Something tells me that these two teams will meet again down the road.