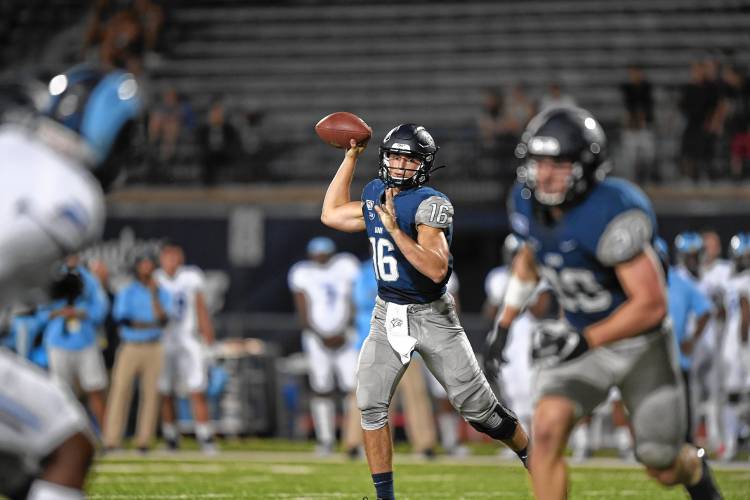 There are some great match ups this weekend including several Ivy League games that have major implications on ther season standings.

Dartmouth Big Green (4-0) at Marist Red Foxes (1-4): The Big Green should have no problem dispatching a Marist team that gives up over 30 points per game. Dartmouth will be able to run and throw the football at will. The big thing for Buddy Teevens squad is to come out of this game healthy.

Princeton Tigers (4-0) at Brown Bears (1-3): It has been tough sledding for the Bears thus far defensively and it won’t get any easier today when Princeton comes to Providence. The Tigers feature a balanced attack led by quarterback Kevin Davidson. The dual threat quarterback leads an offense that is averaging 38.5 points per game. Brown coach James Perry is fully aware of what this Princeton offense can do. He was the offensive coordinator at Princeton prior to taking the Bryant job last season.

Yale Bulldogs (3-1) at Richmond Spiders (3-3): The Bulldogs are coming off of a tough loss at Dartmouth last week but have the opportunity to bounce back today against a Richmond team that features an uptempo spread attack that features a punishing ground game. Yale must find a way to score early and play with the lead otherwise they’ll have trouble possessing the ball given how much Richmond runs it.

UNH Wildcats (4-2) at Delaware Blue Hens (3-3): The Wildcats have won four in a row and are ranked 24th in the FCS coaches poll. They face a tough test today from long time foe Delaware but the Wildcats have been playing well on both sides of the ball and are better equipped to win a game like this now than they were earlier in the year.

URI Rams (1-5) at Albany Great Danes (4-3): The Rams hung tough last at Virginia Tech losing 34-17. URI has played well offensively but defense continues to be an issue. They face an Albany team that can score points but has also given up a lot of points. URI has been snake a bit this season so a win today would go a long way in validating how well this program has played at times this season.

Bryant Bulldogs (2-5) at Central Connecticut State Blue Devils (5-1): Head coach Chris Merritt’s team has won two of three and is playing their best football of the season. Central Connecticut state will pose some major challenges, especially on offense but the Bulldogs have improved immensely on defense and that defense will keep Bryant in this game. Winning it will be the challenge.

Maine Black Bears (2-4) at Liberty Flames (4-2): The Black Bears defensive struggles have continued and things won’t get any easier today when they visit Liberty. The Flames have turned the corner under first year head coach Hugh Freeze. They play fast and and have the ability to make big plays in the passing game. Maine is going to have to run the football and play keep away otherwise they are in for a long afternoon.