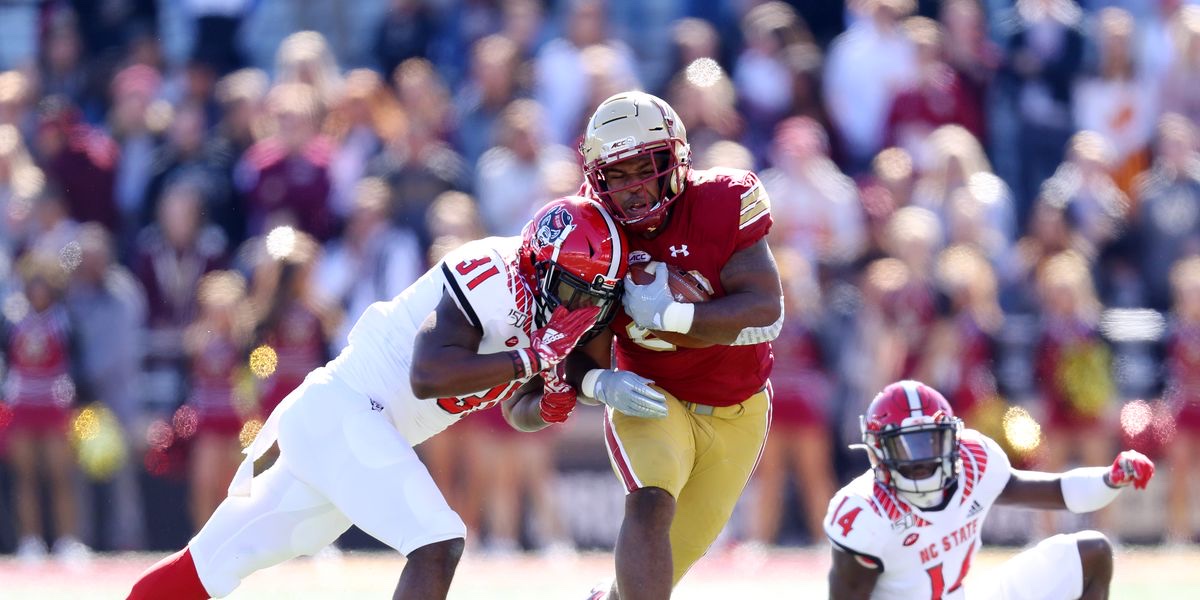 In this era of spread offenses and RPO’s, Boston College reminded us yesterday that power football is alive and well in the game today.

The Eagles set the tone early against an N.C State defense that was number one in the ACC against the run. Head coach Steve Addazio and offensive coordinator Mike Bajakian made it clear from the opening possession that they were going to pound the rock! The end result. 60 run plays, 429 yards rushing and five rushing touchdowns.

Boston College used man gap and zone blocking schemes to run through the Wolfpack’s front seven. The Eagles ran Power O, Power G, Counter Y and U, Toss and Inside Zone en route to a historic day at the Heights.

Sophomore running back David Bailey scored a 54 yard touchdown on this play. It is an inside zone with a fake reverse action on the snap.

A.J Dillon finished with 34 carries for 223 yards and three touchdowns. David Bailey carried the ball 16 times for 181 yards and two touchdowns. The Eagles didn’t try to get cute either. They ran a couple of jet sweeps to keep N.C State honest but for the most part, they ran right at N.C State and wore them down.

The Steve Addazio era at Boston College has been defined by running the football. Yesterday was the second time in Addazio’s tenure that the Eagles had a 400 yard rushing game against N.C State. The Eagles last did it in 2013, Addazio’s first year.

Boston College has tried to be a spread, tempo team throughout Addazio’s time at the school but the Eagles are still at their best when they can line up, pound the ball and lean on the opposing defense. It is a tried and true formula that has worked for decades in football. Boston College proved that yesterday. Running the football still has a place in the game.