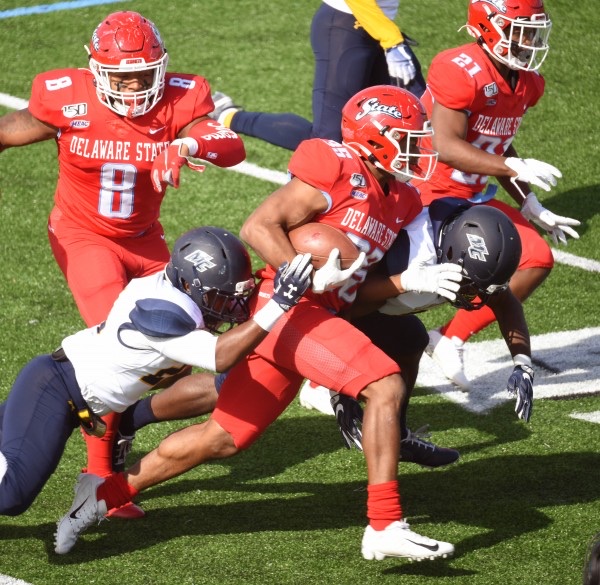 Merrimack will look to make it two in a row when Presbyterian visits Andover.

There are several important match ups this week in both the CAA and Ivy League. Here is our preview of the division one games in New England today.

Brown Bears (1-4) at Cornell Big Red (1-4): Brown has an opportunity to win their second game of the season against a Cornell team that struggles to score points. The Bears have struggled to stop teams this season so I guess all things even out right? This should be a good game and I expect a high scoring game. The Bears should win and if they do, it will be in a shootout.

Elon Phoenix (3-5) at URI Rams (1-6): The Rams deserve better than their 1-6 record. They have been competitive and have been in most of their games this season including playing Virginia Te h tough two weeks ago.

Today, they face an Elon team coming off of an impressive 42-7 win over Delaware. The Phoenix last trip to New England was not so good. They lost 26-10 to UNH. Elon has been inconsistent on offense which could be good for a URI defense that has struggled to get consistent stops.

William & Mary Tribe (2-5) at Maine Black Bears (2-5): Freshmen quarterback Joe Fagnano threw for 445 yards and five touchdowns last week in a 59-44 loss to Liberty. Maine is throwing the ball more now which is good because they are facing a William & Mary defense that gives up 240 yards passing per game.

The Black Bears desperately need a win, especially on homecoming. Something tells me Nick Charlton will have squad ready to play.

Bryant Bulldogs (2-6) at Robert Norris Colonials (3-4): Bryant got whacked 52-14 last week by Central Connecticut State but will look to bounce back this week against an average Robert Morris team that is on par with the Bulldogs. Moving on from last week will be key for Chris Merritt’s team. They can win this game.

Colgate Raiders (1-8) at Holy Cross Crusaders (3-4): After a tough loss to Harvard last week, the Crusaders gave a chance to bounce back this week against a bad Colgate team that has struggled on defense all season long. The Crusaders are playing much better on offense. Look for Holy Cross to have a big on the ground and in the air.

Presbyterian Blue Hose (0-7) at Merrimack Warriors (3-4): The Warriors picked up a big road win last week at Delaware State. I know it’s Delaware State but considering Merrimack is in their first year of playing D1 football, it’s a big win for Dan Curran’s squad. Presbyterian is not very good so the Warriors have a chance to make it two in a row and build some momentum to finish the season.