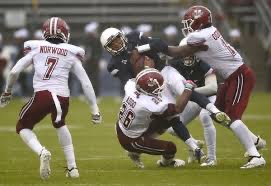 The Minutemen had a bye last week so they have had two weeks to prepare for the Huskies. UMass beat UConn last season. It was a huge program win especially when you consider both programs recruit the same players in New England.

1. Defense must give UMass a chance: It is well documented that the Minutemen defense is among the worst in the country. Despite that, they have a chance to play better against a UConn offense that has struggled all season long.

2. Limit the big plays: Another problem for the Minutemen this season. They have given up big plays through out the season. If UMass can force UConn to drive the ball and not score fast, they have a shot to play better defensively.

3. Balanced approach offensively: The Minutemen need to start running the football more. I know it’s hard when you are playing from behind, but if the Minutemen can run the football early and be more balanced, the offense can put together drives more consistent.

Final score: UConn 45 UMass 28: The Minutemen will play well enough to compete in this game but I cannot their depleted defense stopping UConn enough times to win.