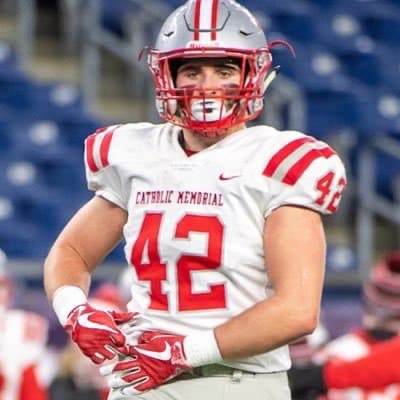 Owen McGowan and Catholic Memorial are ready to make another championship run.

It is playoff time! Round one of the state playoff begins tonight. Here is our top 25 heading into this weekend’s playoff games.

1. Catholic Memorial (7-0): Knights host Needham in round one of the D1 playoffs.

4. Everett (6-1): Everett is a sleeper but could have a tough match up awaiting them in round against Central Catholic.

6. Mansfield (6-1): Mansfield knows that a win over Marshfield sets a showdown with arch rival King Philip in round two.

7. Springfield Central (5-2): The Eagles are soaring heading into the playoffs and look like a strong bet to repeat in D3.

8. Wachusett (7-0): The Mountaineers host St. John’s Shrewsbury in round one. A tough draw.

9. King Philip (6-1): The Warriors were a couple of plays away from being the one seed but lost to Mansfield. They draw a physical Barnstable team in the opening round.

10. St. John’s (S) 5-2: Wachusett in round one is a tough match up but the Pioneers have the athletes to match up.

11. Doherty (7-0): The Highlanders have a chance to prove that their undefeated regular season was no fluke.

12. Canton (7-0): The Bulldogs are a strong favorite in D5 thanks to an explosive offense and a stout defense.

15. Danvers (7-0): The Falcons have been a nice story this season. Let’s see if they can keep it going in the playoffs.

16. Revere (7-0): The Patriots have proven the last few weeks that they are a force to be reckoned with.

17. Wellesley (6-1): The Raiders are a sleeper in D2 South and are primed to knock one of the top three seeds in the bracket. A tough first match up with New Bedford awaits.

18. Milton (7-0): The Wildcats have quietly taken care of business all season long.

19. Reading (6-1): The Rockets have to be the favorites in D2 North. John Fiore and his staff really coach this team up.

20. Ashland (7-0): The Clockers have a tough opening round match up against East Bridgewater.

21. Duxbury (5-2): The Dragons are a strong favorite in D3 South and are in prime position to make a run to Gillette.

22. Brockton (4-3): The Boxers were impressive in their win over New Bedford last week. A sleeper in D1 South.

23. Holliston (6-1): Don’t forget about the Panthers in D5 South. They are too experienced and talented not to be a factor.

24. Stoughton (6-1): The team without a home could be a player in D3 South. The Knights pose a serious threat to Duxbury.

25. Concord-Carlisle (7-0): The Patriots have quietly had a great season and hope to validate it in the playoffs.