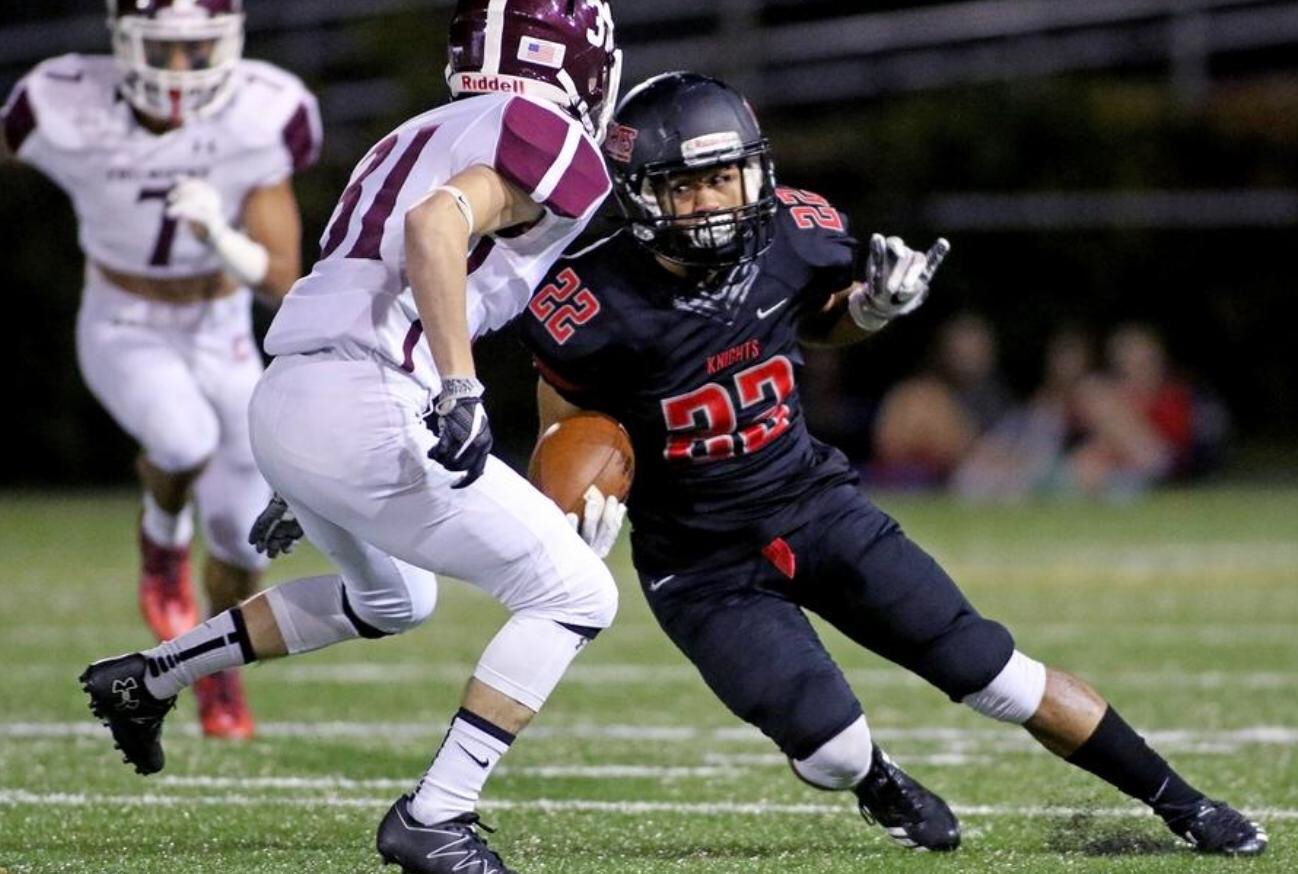 Senior running back Freddy Gabin and North Andover are looking for a return trip to Gillette Stadium.

It is sectional final weekend and there are several marquee match ups on the schedule. Here are our game previews.

#4 Mansfield Hornets at #5 Natick Redhawks: Line play will be the difference in this game. Mansfield absolutely dominated King Philip up front last week but Natick is a different animal up front.

Josh Atwood and company have dominated the line of scrimmage. Natick’s defense has been dominant thus far in these playoffs because of their front seven.

Mansfield’s diverse offensive attack will give Natick some problems. Coach Mike Redding does a great job of spreading the ball around. Natick will have trouble matching up.

I expect a good game but I am hard pressed to pick against Mansfield in this one. They just have too many weapons and I think they will score at least three touchdowns. That might be enough with how their defense is playing.

#15 Franklin Panthers at #1 Catholic Memorial Knights: On paper, CM is the far more talented program but don’t discount Franklin. The Panthers are battle tested coming out of the Hockomock League.

For Franklin, it is simple. Posses the football. The Panthers must run the football and be opportunistic in the passing game. They need to maximize their possessions because if CM gets into their double wing offense and decides to pound the ball, Franklin won’t get enough possessions.

I don’t think this will be a blow out like some people have suggested. I think Franklin will hang in there and play CM tough. For the Panthers to have a shot, they need to slow down Owen McGowan and the Knights running game. That is easier said than done.

I must admit, I didn’t think North Andover would get back to a sectional final after losing so many quality players from last year’s championship team. Kudos to Coach John Dubzinski and his staff for getting this team back on the right track after a slow start.

It will be a contrast in styles. The ground and pound Scarlet Knights versus a Lincoln Sudbury team that likes to spread it out and get the ball in the hands of multiple playmakers.

Both teams like to run the football, particularly North Andover. This game will come down to which team is patient offensively and the defenses. Both defenses are well coached. Mistakes and breakdowns could be the difference in what should be a tight game.

#14 Holliston Panthers at #8 Canton Bulldogs: On paper, this should be one of the best games of the weekend. You Holliston and their explosive offense going up against one of the best defenses in the state in Canton.

The Bulldogs have been so good defensively that they have forced opponents to play their style instead of the style they want to play.

In order for Canton to win this game, quarterback Johnny Hagen needs to play well and the Bulldogs need to run the football. If they do, they can put all kinds of pressure on Holliston and force them to press.

For Holliston, it is all about getting off to a fast start. If the Panthers can do that and set the pace early, they could some pressure on a Canton team that is not used to having the pressure on them.

I think this will be a tight game but it is really hard not to like the Bulldogs st home in this one.

#12 Duxbury Dragons at Hingham Harborman: After a slow start and a quarterback change, Duxbury has turned things around. A familiar foe stands in their way when it comes to advancing.

Other than their loss to Duxbury earlier this season, Hingham has been a model of consistency. First year coach Mark Nutley has done a great job of getting his players to buy into his way of thinking. Hingham relies on their ground game and their defense. The Harborman do make big plays in the passing game but they win the old fashioned way.

Hingham’s defense will be tested early and often by Duxbury quarterback Will Prouty and the Dragons passing game. If Hingham gives up any big plays, it could be a long night again.

#10 Revere Patriots at #9 Melrose Red Raiders: Is there a better story in Massachusetts high school football than Revere? The Patriots have literally come out of nowhere.

Tonight they will face their stiffest challenge to date. A big, physical Melrose team can run the football and plays good defense.

Revere has found a way to get off to quick starts and put pressure on their opponents. They are going to have to do that tonight if they want to win. If they don’t, it could be a long night.