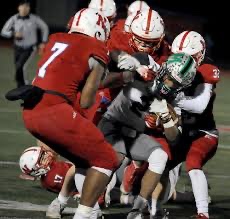 Sectional final weekend did not fail to live up to the hype. There were several great match ups throughout the state. Here are my thoughts on some of the top match ups of weekend.

1. Mansfield absolutely dominated Natick in their 22-3 win in D2 South sectional final. The Hornets once again used their running game and defense to power them to victory. Mansfield will play Lincoln Sudbury in the Division Two Super Bowl on December 7th.

2. Catholic Memorial physically dominated Franklin in its 42-8 win. The Knights used multiple formations and a diverse running game to wear down the Panthers and earn a return trip to the Division One Super Bowl.

3. Speaking of the D1 Super Bowl, St. John’s Shrewsbury put on a clinic on how to shorten a game against Central Catholic. The Eagles ran the football, controlled the clock and played lights out defense to earn a return trip to Gillette.

4. Congratulations to first year head coach Jim Girard for leading Lincoln Sudbury back to the Super Bowl after an impressive win against a tough and physical North Andover team. The defending D2 champs didn’t go down without a fight.

5. Duxbury usually wins with their offense but it was their defense that was the difference in their 20-10 win over Hingham in the D3 South Final.

6. Melrose has been overwhelming opponent all season long so I cannot say I am surprised that they beat Revere 41-7. The Red Raiders just have to too much speed and skill.

7. Plymouth South was impressive in their 27-22 win over Milton in the D4 South final. Defense has been the Panthers calling card this season but their offense got it done in this one.

8. I must admit. I had Canton advancing in Division 5 South over Holliston but Todd Kiley and his Panthers once again proved that they are an elite program in their 27-14 win.

9. Ashland survived 20-19 over Old Rochester in what was one of the best games of the year in the state. The Clockers defense was the difference. Ashland will face Millbury in the Division 6 sectional final.

10. Bishop Fenwick uses timely offense and some key stops in the second half to survive against a Stoneham team that was looking for a return trip to Gillette.