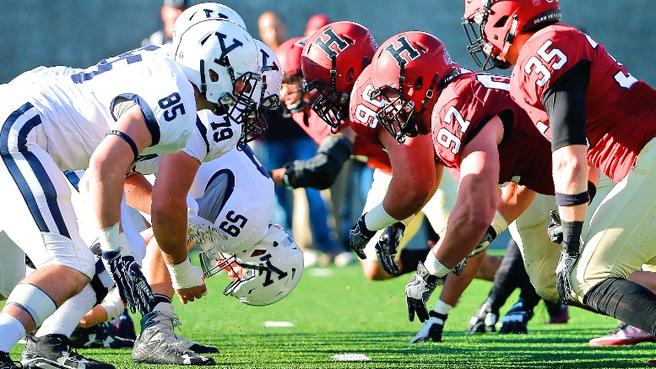 It is the 2019 edition of “The Game” as Harvard travels to Yale to battle the Bulldogs in the 136th meeting between the two long time Ivy League rivals. Harvard has had a disappointing season but the Crimson can make a lot of that disappointment go away with a win. There is a lot at stake in this one for Yale. With a win and a Dartmouth loss at Brown, the Bulldogs can clinch an outright Ivy League title. Even if Dartmouth wins, Yale can clinch a share of the title with a win.

Here are three keys to the game for the Crimson.

1. Get pressure on Yale quarterback Kurt Rawlings: The Yale signal caller has had a fantastic season throwing for 2,585 yards and 24 touchdown passes. Rawlings missed the game last season due to injury but he has bounced back with a vengeance this season. Harvard has struggled against the pass this season giving up over 236 yards per game through the air. They will have a tough time defending the Bulldogs passing game unless the front seven gets consistent pressure.

2. BALL CONTROL! Harvard does not want this to be a shootout. They need to protect their defense by running the football and finishing drives. The Harvard ground game has been a strength this season. The Crimson will need to lean on Yale and be physical. If they can, they can win this game.

3. Win the turnover battle: The Crimson must win the turnover battle. In many ways, turnovers determine big games. Harvard must protect the ball and avoid turning it over. If they do, they will be in good shape. It is easier said than done. Especially against a ball hawking defense like Yale’s.

FInal Score: Yale 31 Harvard 17: I wouldn’t expect anything less than a battle in this one. Games between these two long time rivals are always tight. Expect nothing less today. Harvard will come to play but Yale is too talented, especially on offense. The Bulldogs will win and earn a share of the Ivy League title.