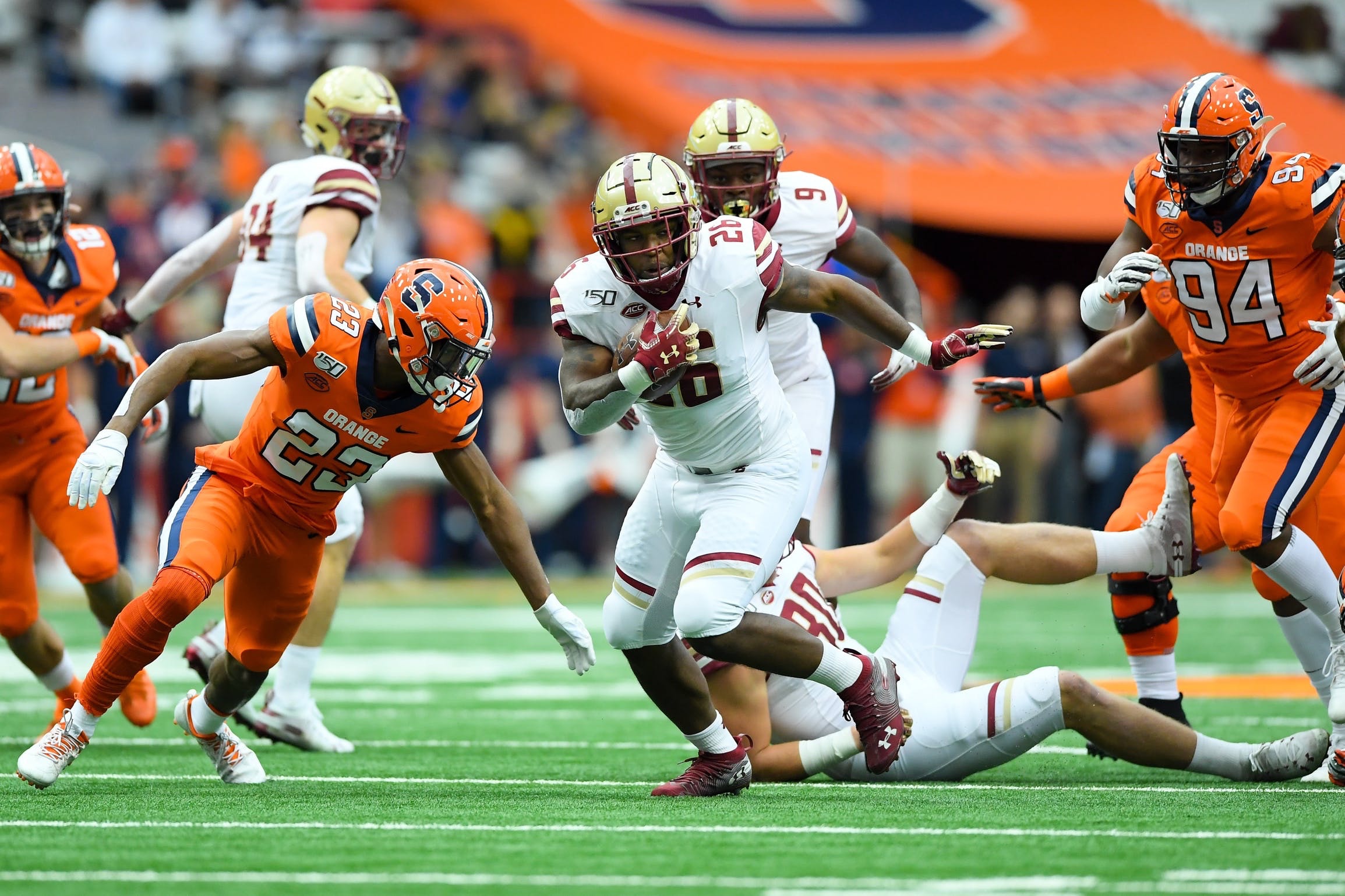 The Jeff Hafley era kicks off against Syracuse at home on September 4th.

The Boston College 2020 schedule was released on Wednesday. The Eagles will open the Jeff Hafley era at home against Syracuse on Friday night September 4th.

Boston College will play five of their first six games at home. The schedule allows Hafley and his staff to get comfortable and get off to a good start.

The road schedule features two challenging games at Virginia Tech and Florida State but the Eagles can compete in the other road games on their schedule.

Here is breakdown of each game.

Friday, Sept. 4 Syracuse: Dino Babers Orangemen can score points but they have struggled defensively in his tenure. This is a winnable game for Boston College.

Saturday, Sept. 12 Ohio: Frank Solich’s Bobcats are well coached and their pistol spread offense can be tough to stop, especially when they get the ground game going. The Eagles are far more talented however and should take care of business.

Saturday, Sept. 19 at Kansas: The Eagles will be looking to avenge last season’s 48-24 humiliating loss to the Jayhawks. It won’t be easy. Kansas should be better in year two of Les Miles tenure. A quick start offensively will be key in this one.

Saturday, Sept. 26 Purdue: Purdue will present problems for the Eagles defensively but Jeff Hafley has had to defend Jeff Brohm’s before so he will have a beat on what the Boilermakers do offensively. Despite that, I think this will be a close game.

Friday, Oct. 2 Clemson: Another nationally televised Friday night game. This will probably be the Red Bandana game. On paper, the Eagles just don’t match up with Clemson but something tells me they’ll play tough for a half. It will not be as bad as last season’s debacle.

Saturday, Oct. 10 Louisville: The Eagles welcome the Cardinals to the Heights on Columbus Day weekend in a game that could be a shootout. Boston College has to find a way to match up with Louisville defensively. Offensively, they will score points but they need to get stops.

Thursday, Oct. 22 at Virginia Tech: The Hokies will be looking to avenge a bad season opening loss to the Eagles last season. Virginia Tech returns quarterback Hendon Hooker and a talented skill group on offense. Winning in Blacksburg is tough. The good news is, legendary Hokies defensive coordinator Bud Foster has retired. That should make things a little easier for the offense.

Saturday, Oct. 31 Holy Cross: Bob Chesney has done a great job of making the Crusaders a competitive program. Holy Cross has good athletes for a Patriot League school. This could be a tough game for a half. As always, it depends on the offense and if they start fast. If the they do, the Eagles should win big. It is nice to see the two schools renew this local rivalry.

Saturday, Nov. 7 at NC State: The Eagles have traditionally struggled in Raleigh. I expect another tight game next season. Wolfpack coach Dave Doeren is feeling the heat so the Pack will be much better next season. N.C State returns a lot of talent on offense including quarterbacks Devin Leary and Brady Hockman.

Saturday, Nov. 14 at Florida State: Tallahassee could be a tough place to play and win again. New coach Mike Norvell will have the Seminoles offense humming FSU has some talented young skill on offense so Hafley and his defensive staff will have their hands full. Games like this require the offense to do their part and score points. This could be a shootout between two programs led by two first year head coaches.

Saturday, Nov. 21 North Carolina: Mack Brown brings his Tar Heels to the Heights for a rare visit. UNC will be good offensively. They can score points. Quarterback Sam Howell and the Tar Heel receivers could present some problems for the Eagles defensively. Again, another game that could end up a shootout.

Saturday, Nov. 28 at Wake Forest: Quarterback Jaime Newman has transferred so that should make the Demon Deacons easier to defend but winning in Winston Salem is still tough because Dave Clawson and his staff do a great job coaching their team. A bowl game could once again be on the line in this game.