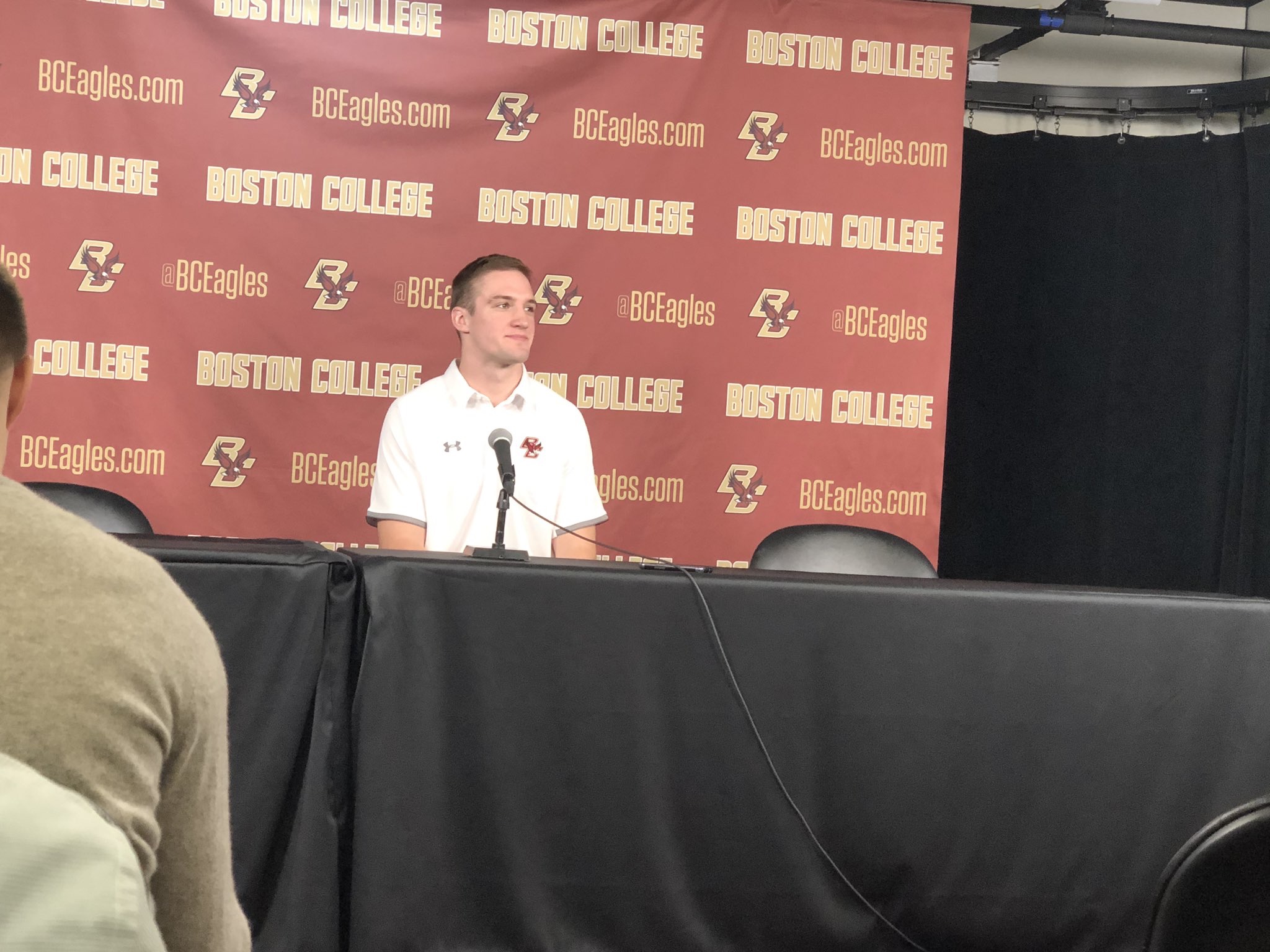 CHESTNUT HILL — Phil Jurkovec barely saw the field while at Notre Dame, and the new Boston College quarterback transfer is simply looking to show what he can do.

On Thursday afternoon, tight end Hunter Long, linebacker Max Richardson and wide receiver Kobay White met with the media. Jurkovec took the podium last, and while he wouldn’t get into any specifics about his time as a member of the Fighting Irish, it’s clear that BC may reap the benefits of a young man who just wants to go out and compete.

“I knew anywhere I was going to go there was going to be competition,’ Jurkovec said. “The QB’s on the roster are very good, we’ve all been competing already.”

Jurkovec had two very important things he was looking at while he was in the transfer portal. The highly-recruited quarterback from Pennsylvania was looked at by many of the bigger name schools in the country out of high school, but now it was all about growing for the pro-style quarterback.

“The two criteria I was looking at when making a choice where to go was the coaches – ones that were going to believe in me – and development,” Jurkovec explained. “I think Iv’e got a lot of room to grow and that’s what I found with coach Hafley and (offensive coordinator) Frank Cignetti.”

Stylistically, Jurkovec believes he’ll be able to fit into whatever prototype the BC staff needs him to be.

“I think I can fit into different offenses,” he said. “The spread, the pro style, talking to coach Cignetti I think it’s going to be a mixture here as to what he does. Really, I think I can morph into different styles, but it’s really about my development. I think I have a lot of room to grow in terms of knowing football, knowing offense and defense, playing, practicing…there’s just a lot that I can do (to get better).”

Both White and Jurkovec went to rival high schools in Pennsylvania, so as the trash talk has picked up, the chemistry is also already developing. Throughout the spring, the wide receiver and quarterback rooms are eagerly looking forward to the daily grind.

“We both went to two powerhouse high schools, so we’ve gotten our trash talking in a little bit,” White said with a laugh. “Before I got (back) here I wasn’t working out with the team, so I was asking around how’s Phil? Is he weird, is he cool? I got all positive answers once I came back. I’m still getting to know him but he seems like a great guy so far.”

“The coaches have been on the road recruiting, so we haven’t gotten into too much with the playbook, but working alongside the wide receivers…I think it’s a very cohesive unit and there’s a lot of playmakers, so I think we can do a lot and I know coach Cignetti is very excited about what we have,” Jurkovec added.

Jurkovec was looking on as White joked about their high school rivalry and getting to know each other, and while it was a brief moment, it was an interesting moment to look inside the already-budding relationship between quarterback and receiver, a relationship that could mean big things for the Eagle offense if it. Percolates throughout the locker room