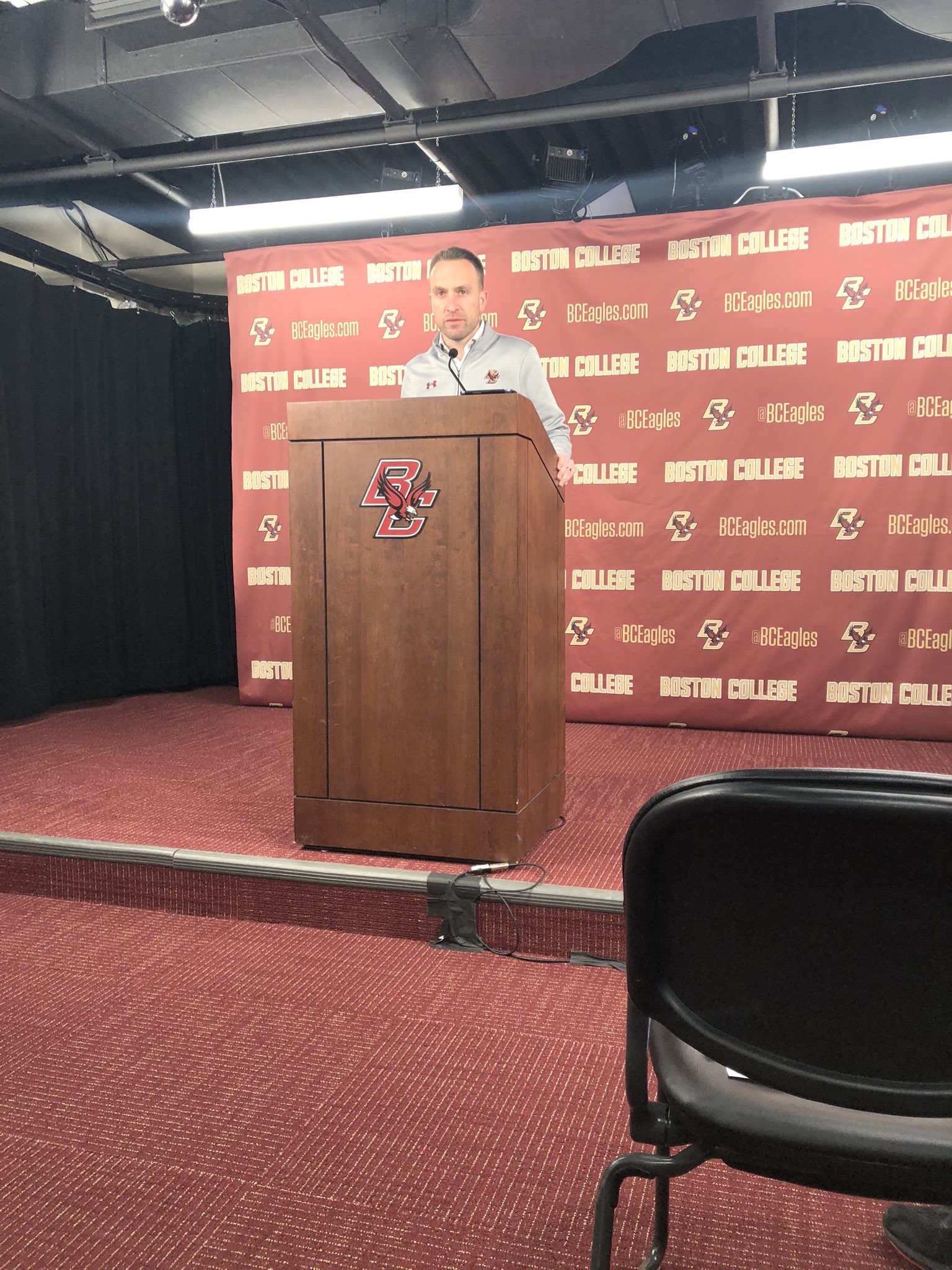 CHESTNUT HILL — On Wednesday morning new BC head coach Jeff Hafley met with the media for the second time since taking over the reigns of the program.

This time was far less crowded and had far less pomp and circumstance, but it was equally as important to Hafley’s intro press conference as he and the Eagles announced their 2020 recruiting class of 15.

Of course, the talent Hafley has already recruited is eye-opening, but I was more curious about the overall perception of Massachusetts football around the country in the eyes of big time programs like Ohio State – and asked him what exactly goes into building the early relationships with high school coaches and players in the area.

Hafley pointed out that he wants an open door policy of sorts when it comes to players from the Commonwealth.

“I didn’t have much time to get out on the road and recruit, and I actually spent a lot of time in this area,” Hafley said. “And as I looked at this job and I looked at this are,a and I think we have to do a great job of evaluating really well in this area. One, we have to get to know the high school coaches. If they want to call up and talk football our staff will be open to them to talk football. Whatever they need, we want them to feel apart of this whole entire thing, so that’s the most important piece.

“Whatever they need we will give to them if we can. Then, we have to do a great job in this area – especially because we’re close – we have to evaluate them and I’m not just talking about film. They’re close enough where they should also feel free to come. Whether it’s to camp, whether it’s to come on a Saturday and watch football with us, whether it’s to come sit in our meetings and watch spring ball, because I think what’s lost in recruiting right now is you watch the tape and you offer but you don’t get to know the kid.”

Hafley compared the importance of recruiting not only here but in general to player selection at the highest level.

“I mean, we have a luxury with kids that are close by of getting to know them, getting to know their families, what makes them tick, and when you do all that it’s kind of like in the NFL Draft where you’re getting ready to draft a kid. You better know everything about them. Once you do that, then you can kind of get a glimpse of what he’s going to be like. So, if there’s a kid that’s eight hours away and we love his tape, but there’s a kid half an hour away and we get to know him, we’ve got to take the kid who’s a half hour away.

“I’ve mentioned this before, there were plenty of guys in the NFL that were on our rosters that Iv’e been apart of from the New England area that turned out to be really good players in the NFL and they went to smaller schools. So we need to do our job and we need to listen to these coaches and watch the film for ourselves and then get to know them. We have to do a great job in this area and I think our staff understands that.”

As for the perception of Massachusetts football around the country, Hafley believes it’s better than people may think.

“I think it’s on a rise,” he said. “I think coaches I’ve talked to around the area about it, I think the perception is that yeah it’s getting better and on a rise right now.”

After just two media sessions, it’s extremely evident that Hafley is detail oriented to the enth-degree. That may mean more eyes on the local New England football scene and more opportunities for high school players to #GetIn as Boston College tries to establish a new era of winning.