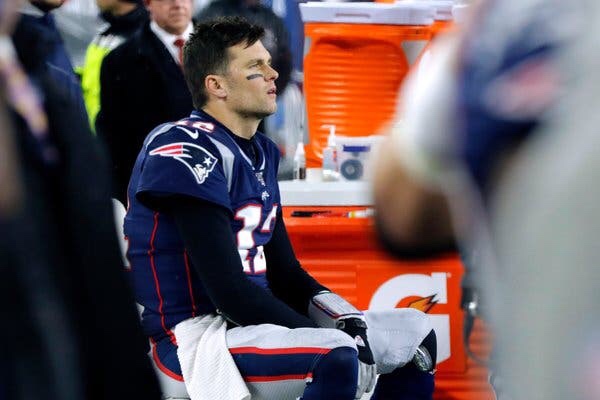 As the end of February approaches, the reality of Tom Brady becoming a free agent for the first time in his career becomes more and more likely by the day.

The Krafts are doing their best to spin it, implying they are “letting” Tom Brady enter free agency because it will be better for all involved to see who has what in terms of options. However, let’s be clear… the Patriots aren’t “letting” Tom Brady do anything. This is Brady’c choice, and unless Bill Belichick acknowledges that he wants Brady back as much as Brady thinks he should want him back, there is a very good chance TB12 is wearing a different jersey next season.

For now, we’ll worry about who the heir apparent at Gillette will be a bit later on, for now, here are some of the most logical and the most ridiculous landing destinations for the GOAT:

Los Angeles Chargers – This is the obvious one, or one of them at least. With the departure of Philip Rivers and the team moving in to a new stadium, the Charger desperately need something to draw people. The outrageousness that was their “home” games over the past few years is embarrassing as road teams regularly took over the home field advantage. The greatest quarterback of all time would obviously bring drove of casual fans.

For him it makes a ton of sense. The TB12 brand would flourish in California, Gisele would (presumably) be thrilled to be out there, and most importantly, the offense would be one of the best Brady’s ever had – if not the best. Keenan Allen, Mike Williams, and Melvin Gordon are all elite “weapons”, and don’t underestimate Russell Okung and Mike Pouncey as key factors on the O-line. LA makes too much sense, and if Brady can navigate some stupidity from Antony Lynn, it’s a real possibility.

New York Giants – Yes, they have their own quarterback in Daniel Jones, but if the Broncos can sit Tim Tebow at the height of Tebow Mania for Peyton Manning, why can’t the Giants go the same route?

Saquon Barkley is arguably the best back in the league, Evan Engram should continue developing into a soon-to-be force at tight end, and both Sterling Shepard and Golden Tate would be a formidable receiving core for Brady to work with. Don’t forget about old friend Nate Solder on the line as well. The defense would need to get better in a hurry, and whether Tom had a legitimate relationship with new head coach Joe Judge during his time in New England is a big question. His ability to work with Jason Garrett could be a huge hurdle as well. However, if you continue to include how much the post-football stuff matters, what better place to drive TB12 than under the bright lights of NYC?

Tennessee Titans – Think Brady wouldn’t want to throw to AJ Brown downfield a few times a game? How about Delanie Walker in the Red Zone? While Derrick Henry in the backfield would obviously be a huge draw as well, his impending free agency could make Mike Vrabel’s job tougher when he tries to map out a plan of action to continue adding weapons around Brady. You can never rule out his relationship with Vrabel either and Nashville is obviously on the rise in terms of popularity, so while it’s unlikely, it’s still a very reasonable consideration.

Miami Dolphins – For many of the same reasons as LA, Miami just seems too obvious to ignore. The TB12 brand would thrive, and there are Patriot ties. The Dolphins owner Stephen Ross is a Michigan man, and you simply can’t ignore that part with Brady. The offensive weapons are obviously not nearly as intriguing as LA, and the defense would need work. If we’re taking football reasons then Miami shouldn’t even be on the list,  but ultimately, if it’s about Brady’s post-football life then Miami is a perfect spot to set up camp which gives South Beach as a possible destination far more credibility.

Carolina Panthers – With Cam Newton most likely gone, future NFL MVP Christian McCaffrey, DJ Moore and Curtis Samuel are some nice toys for Brady to play with if he chooses. Living and promoting TB12 in North Carolin may be a struggle, but that offense would immediately be entertaining and a potential factor in the NFC with Brady under center.

Dallas Cowboys– Do any of us really think Brady wants to get anywhere near that train wreck? Jerry Jones may be a good businessman, but his approach to building and managing a football team is brutal. Brady having to answer for something Jerry Jones said during a postgame media scrum seems like a nightmare and the least appealing thing on earth for a 43-year old quarterback to have to go through.

Of course, Ezekiel Elliott, Amari Cooper, Michael Gallup and Randall Cobb with one of the best offensive lines in the game is intriguing, but I believe the crazy factor with Jerry Jones would far outweigh anything Dallas could offer in terms of pushing the TB12 brand when Brady’s making his final decision.

Las Vegas Raiders – Stop it. Tom Brady is not going to play for Mark Davis. Sure, who wouldn’t want to live in Vegas? But at 43 and with a family, is Brady really going to start all over again in friggin Vegas?

Now, the TB12 brand would probably do well out there, but not as well as California or Miami. The talent isn’t great with Zay Jones, Hunter Renfroe, Tyrell Williams and Josh Jacobs, and god only knows how Brady and Gruden would get along. You’d have to assume Gruden would bend over backwards for him, but could it really work at a championship level?

Much like Dallas, the crazy factor not only playing for Davis but playing for the Raider fan base seems like something Brady would want to avoid this late in his career too. The jersey would look pretty awesome though.

Indianapolis Colts – I choose to look at this one like Pedro Martinez putting on a Yankee uniform. He did go to the Mets, but that just felt different. Brady putting on the same jersey he battled Peyton Manning in during so many epic duels would just seem wrong.

Frank Reich is a great offensive mind and TY Hilton, Zach Pascal, Devin Funchess along with Eric Ebron at tight end and the likes of Anthony Castonzo on the line would be hard to ignore, but Brady wearing the horseshoe would leave a sour taste with fans across New England and I simply don’t think he’d bring himself to do it.

The beauty of all this is that nobody but Brady ultimately knows what will play the biggest or smallest factors in his decision, which is what makes the speculation so fun.

No matter what scenario you lay out, the most logical thing for him to do is simply stay put as long as the Krafts and Bill supply weapons for him.

Belichick acknowledging he wants Brady back instead of trying to win without him is going to be the biggest key in all of this, but if the two can come to an understanding that this is best for both in terms of chasing one or two more rings, all the other free agent visits, rumors and “reports’ set to come out the next two or three weeks will just be for bleeps and giggles.