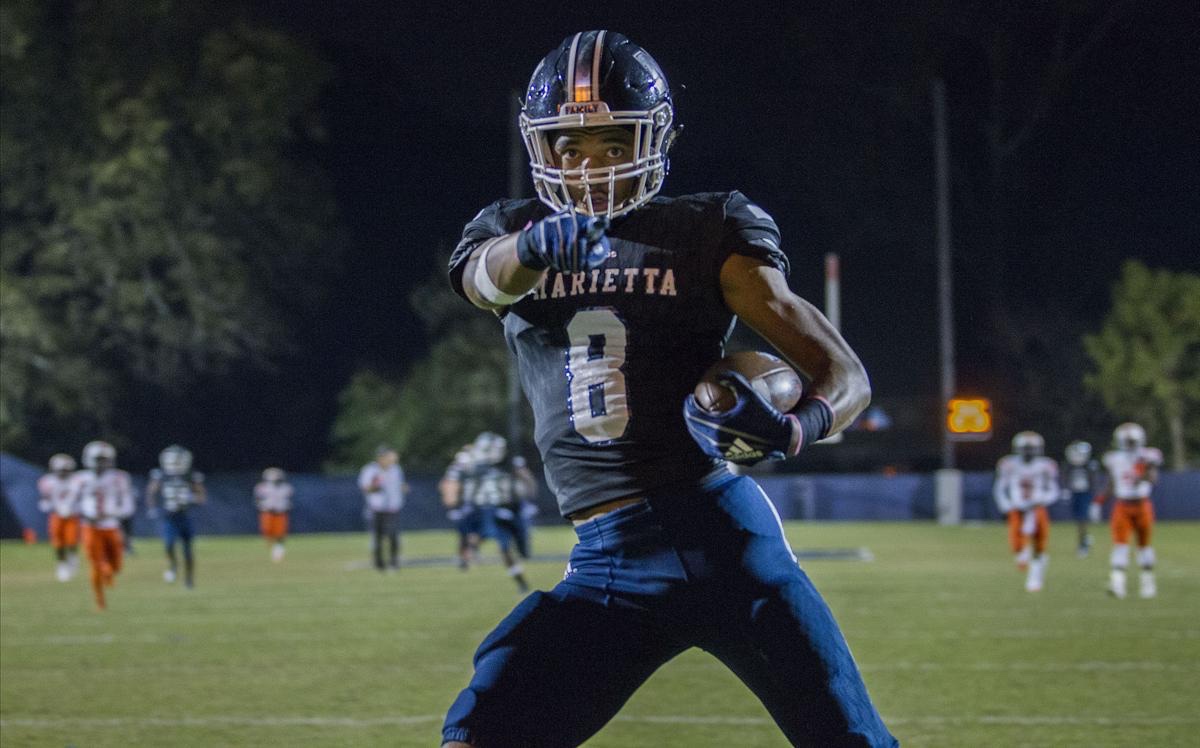 Wide receiver Taji Johnson could make an impact for the Eagles as a freshmen.

Boston College landed a solid recruiting class in Jeff Hafley’s first month on the job. Hafley and his staff were able to lock down most of the recruits who committed to Steve Addazio as well as pick up several other important commitments.

Here is a breakdown of each recruit that committed to Boston College.

Dwayne Allick, G, 6-2 295, Laurel, MD (DeMarha): Allick played tackle in high school but he will kick inside and play guard for the Eagles. Allick is raw but has terrific upside. He plays with a nasty demeanor, especially as a run blocker.

Kam Arnold, DB, 6-1 216, West Bloomfield, Michigan (St. Mary’s): Arnold profiles as a free safety physically but has the ball skills to play cornerback. Hafley likes corners with length so Arnold coukd play either safety or corner depending on what he does in fall camp.

Justin Bellido, WR, 5-10 165, Brooklyn, N.Y (Erasmus Hall): Bellido is ideally suited to operate out of the slot. He is explosive with the ball in his hands after the catch. He could also return kicks as well.

Denzel Blackwell, DB, 5-10 170, Houston, Texas (Strake Jesuit): Blackwell is athletic and smooth in his movements. He has terrific closing speed and above average ball skills. He does a good job of tracking the ball when it is in the air. Blackwell could have a chance to play right away.

Charlie Gordinier, TE, 6-4 225, Monmouth, N.J (Red Bank Catholic): Gordinier is your classic 11 personnel, spread tight end in college foitball today. He runs good routes, has a wide carch radius and competes for the ball in one on one situations. Gordinier will need time to develop physically but he has the potential to develop into a very good player.

Andre Hines RB 6-2 215 Staten Island, N.Y. (Erasmus Hall): Hines is a big back who is smooth and fluid for his size. He has surprising quickness in the open field and can finish because he is a long strider. Hines has enough room in his frame to add more weight and become a more physical tackle to tackle back.

Jio Holmes DB 6-2 196 Cleveland, Ohio, (Cleveland Heights): Another defensive back with length. Holmes projects as either a free safety or cornerback. He has played both in high school. Holmes is a fluid athlete who has the ball skills and the closing speed to match up one on one in man coverage.

Cam Horsley DT 6-3 280 Riverton, N.J., (Cinnaminson): Horsley is your quintessential three technique defensive tackle. He has good get off, is strong at the point of attack and can penetrate and play along the line of scrimmage. He will take some time to develop but he has terrific upside.

Taji Johnson WR 6-3 202 Powder Springs, Ga. (Marietta): Johnson is a big target who has a wide catch radius and strong hands. A terrific blocker, Johnson finishes his blocks past the whistle. Boston College hasn’t had a receiver with this size and skill set in a long time. Johnson could make an impact right out of the gate as a freshmen.

Hans Lillis TE 6-3 245 Gwynedd Valley, Pa. (Germantown Academy): Lillis is an athletic move tight end who can be detached and line up anywhere in a formation. He is a hard working blocker and does a good job of engaging defenders and playing to the whistle. Lillis is your classic 11 personnel tight end that can generate match ups in the passing game.

Kevin Pyne OL 6-8 300 Milford, Mass, (Milford): Pyne was one of the most highly recruited players in the country as a freshmen and sophomore at Millis High School. After two years at Millis. Pyne transferred to Milford High School where his uncle and grandfather played. He has tremendous and physical tools but he needs to play to that size and he needs to develop an edge.

Matthew Rueve QB 6-4 182 Cincinnati, Ohio, St. Xavier: Rueve has good size and is athletic in and out of the pocket. The thing that inpressed me the most on his tape is his deep ball accuracy. Rueve can throw the ball vertically on a consistent basis and locate his target.

Jason Scott DB 6-0 170 Laurel, Md, (Our Lady of Good Counsel): Scott can play outside corner or in the slot. He is athletic, has smooth hips and can transition in and out of his breaks with no issues. Scott does a good job of anticipating routes and breaking on them.

Korey Smith LB 6-1 230 Brightwood, Va, (The Peddie School): Smith is your typical big, thumping Mike (Middle) linebacker who runs well laterally and displays the ability to track down ball carriers and finish plays behind the line of scrimmage. He should fit in well in the Eagles new multiple 4-3 scheme.

Ozzy Trapilo OL 6-8 275 Norwell, Mass, (Boston College High School):  Trapilo is raw but he has really good feet is athletic and can play in space. His frame will allow him to add 25 to 30 pounds to it. He can easily play at 305, 310 with no problems.