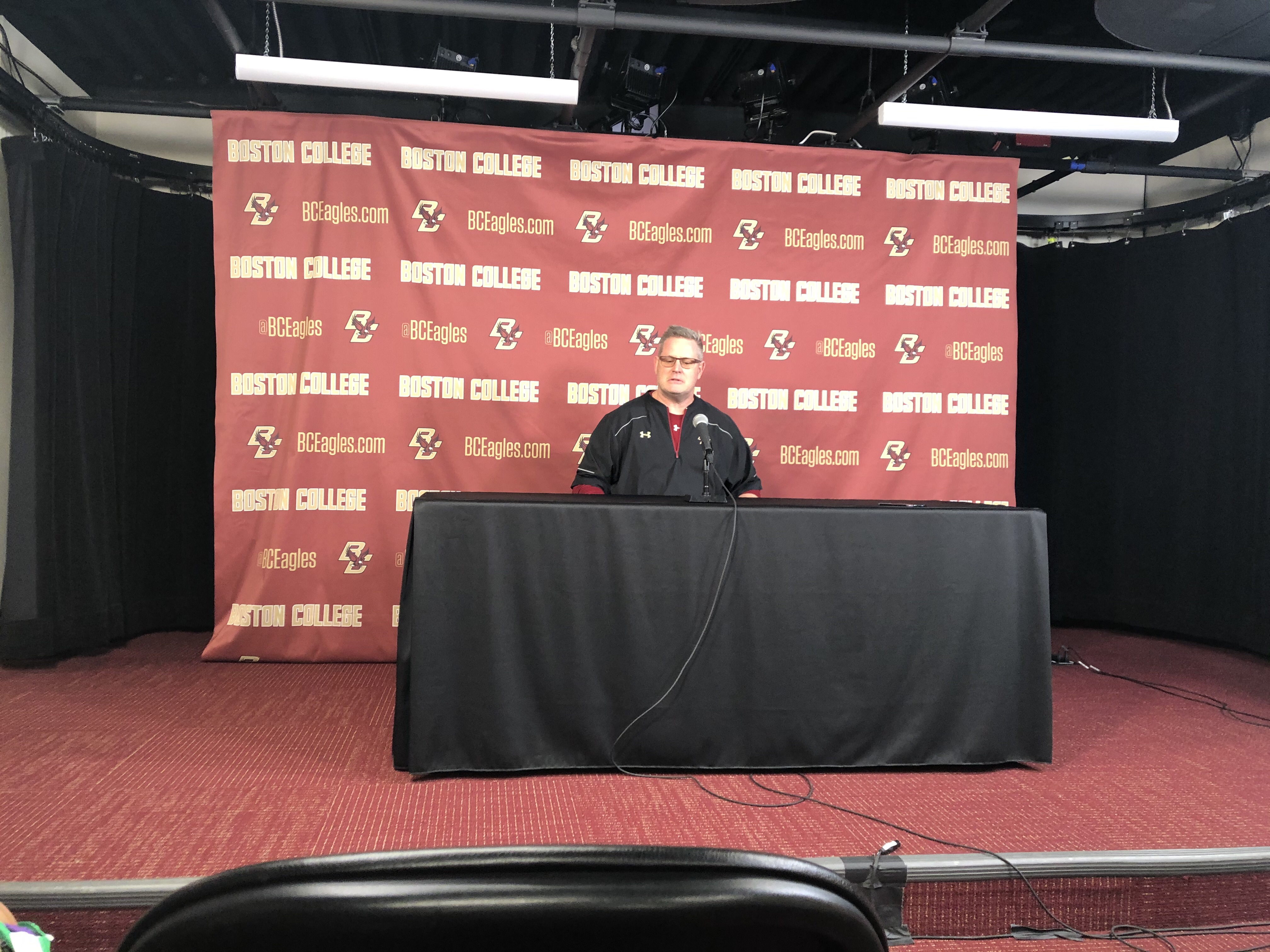 CHESTNUT HILL — The men in charge of helping new BC coach Jeff Haffley try to turn the Boston College program into a viable national title contender met with the local media for the first time on Monday afternoon in advance of spring practices getting underway soon. All 11 of them clearly demonstrated the same passion that Haffley has thus far since taking the job.

For two hours, each new member of the staff took to the podium to answer questions and explain what makes them unique to this new regime. The most glaring takeaway is just how much NFL experience and overall big-time school experience this staff has under one roof and just how valuable that will be moving forward.

New offensive coordinator Frank Cignetti kicked things off with a bang, coming in to the room and individually shaking the hand of each media member in the house while introducing himself, displaying a boisterous, hard-to-ignore personality and a true appreciation for being in that particular moment.

“I’ll tell you what, it’s been a great adjustment,” Gignetti said when asked how things have been going early on. “You talk about working for a great head coach in Jeff Hafley, being part of a great academic institution at Boston College and Boston’s been a great city. I’m so impressed with our players, the student athletes they are and how hard they work.

Cignetti may represent the amount of NFL expertise that is now on board that better than anyone, as just a year ago, Cignetti was working alongside Green Bay Packers quarterback Aaron Rodgers. Now, Cignetti is fully invested in helping BC achieve big things, and so far the player are too.

“If you’ve watched how the kids have bought in to the message of the football program and the work they’ve put in to the strength and conditioning program, it’s been unbelievable, the commitment and the effort they’re putting into it.”

A bit later on in the day offensive line coach Matt Applebaum – who at one point was an offensive assistant on the Jacksonville Jaguars staff – had his turn and spoke about how much of an advantage both he and the Eagles have that a majority of the offensive line is returning and not just starting over.

“We’re definitely not starting from scratch,” he said. “Those kids have been so awesome in terms of just taking it in and listening to what I have to say and working with me to build solutions. The idea is it starts up front, and having experience back, and not just experience but productive and quality experience, I think everyone’s excited about that.”

Former BC receiver, turned receivers coach, now turned running back’s coach Rich Gunnel spoke a bit later on and discussed how impactful its been to be in a room with so much high level football experience and knowledge in one place.

“It’s been awesome,” he said in particular of working with Cignetti. “I’ve bene around some really good offensive coordinators that have all had NFL ties, and you just keep learning more and more. It just makes you realize there’s even more to learn. That’s the best thing about this sport, it’s always expanding, it’s always what’s next. What’s the next niche that you have to pick up on.

“New receivers coach Joe Dailey who was an offensive coordinator, Iv’e learned a lot from him. Matt Applebaum…there’s so much more Iv’e picked up on these last couple months.”

Following Gunnell was new defensive line coach Vince Oghobaase. Oghobaase played at Duke and has a stop with the San Francisco 49ers on his resume. On Monday he talked about the new energy around the program permeating throughout the staff and not just the locker room.

“I’m naturally a very jovial, energetic guy,” he said. “I think whenever anybody’s excited or has energy whether it be a team, a staff or an organization, I think that’s very, very critical, especially us being a younger staff and a young ball team, we have to make sure we’re bringing that energy because no one wants to be around guys that don’t have any interest, so that starts with the staff and permeates through the players and the team.”

Strength and conditioning coach Phil Matusz closed out the session and while explaining that the Eagles will be having a real-life-like NFL combine this week before the actual one starts out in Indianapolis, he also spoke of just how important building men not just football players is and will be.

“What I believe in what Iv’e grown up in is human development,” he said. “It’s not just X’s and O’s, and bench press and squats, it’s all encompassing. It’s mental, physical, emotional, spiritual. Human development is something that these athletes need. It’s generational as well. How can we implement training and all these aspects they need and be delivering it in a unique way.”

All 11 men that spoke on Monday exuded an incredible amount of passion for what they were talking about and what they will be coaching. The “Get In” motto hasn’t just been accepted by the players. The entire coaching staff is fully invested in trying to build something special at Boston College and with spring ball rapidly approaching the fruits of he early labor will be evident very soon.