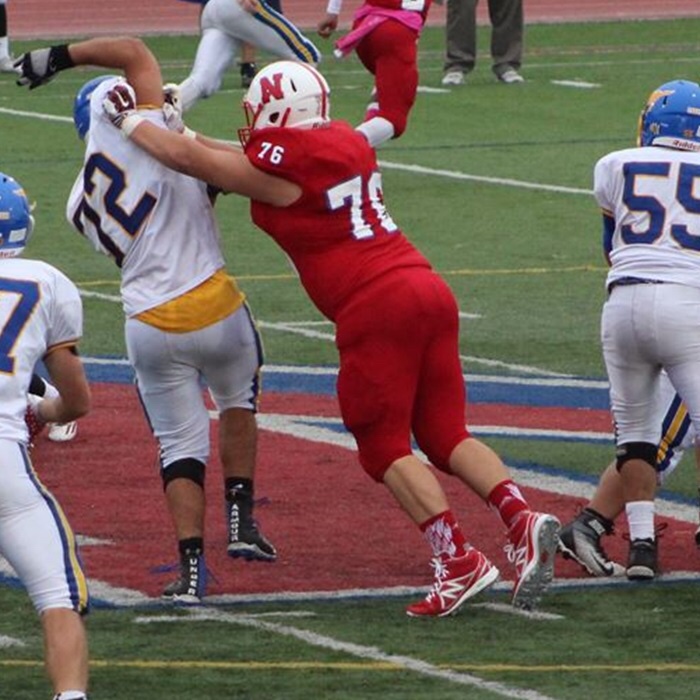 Natick’s Josh Atwood could play right away for the Minutemen.

UMass signed 21 three star recruits in what is shaping up to be a good class for the Minutemen.

Walt Bell and the UMass coaching staff emphasized getting bigger and stronger up front on both the offensive and defensive lines. They also wanted to upgrade the defense particularly at linebacker. They accomplished both.

The staff also focused on adding some ready made talent to the roster by going the JUCO route as well. That should benefit them next season.

Here is our breakdown of UMass’ 2020 recruiting class.

Aaron Beckwith, DE, 6-3 270, Northwest/Germantown, MD: Beckwith is an explosive defensive end who can plays in a two and three point stance effectively. Beckwith plays with good power and balance and is disruptive along the line of scrimmage.

Sammy Solomon, DT, 6-3 295, Wyoming/Pittston, Pa: Solomon was a huge get for Walt Bell and his staff both figuratively and literally. Solomon had offers from Boston College, Rutgers and Syracuse. Solomon is your prototypical three technique defensive tackle in the 4-3. He is explosive off the ball and has strong hands. He has the athleticism to be disruptive all along the line of scrimmage. Solomon should step in and make an immediate impact as a freshmen.

Tristan Armstrong, DB 6-0 175 Washington, D.C./National Christian Academy (Md.): Armstrong is a good athlete who is fluid and gets in and out of his breaks with ease. His length allows him to roll up and play as a Cover 2 press corner.

Josh Atwood, DT, 6-2 350, Natick/Natick, Mass: I know first hand how tough it is to play against Josh Atwood because I have coached against him. Atwood is strong at the point of attack and does a good job of absorbing double teams. He moves well for his size. He is quick off the snap and moves ell laterally. He could potentially get playing time as a freshmen.

Dominik Behrens, OL 6-5 305, The Williston Northampton School (Mass.)/Hamburg, Germany: Behrens is a quality pick up for Bell and his staff. He is long, athletic and has the necessary to be a multi-year starter. He is raw but once Behrens figures it out, he can be special.

Jared Cole, RB 5-10 190, Stone Brudge/Ashburn, Va: Cole has good size and he runs with good power and balance. He is deceptively quick in the open field and he can be a factor in the passing game, something Bell and this coaching staff want out of their backs.

Onuma Dieke , WR 6-4 190, North Clayton/ Riverdale, Ga: Bell wanted to remake the receiving corp. He wanted to get bigger and more physical on the perimeter. Dieke has good size, a wide catch radius and strong hands when high pointing the ball.

Taishan Holmes, DT, 6-2 300, Garden City College/Tappahannock, Va: Holmes is big. He plays with good get off and displays strong hands when engaged. Ha consistently shown that he can split double teams and makes plays on the ball. He has a good burst to the ball carrier. Holmes will consistently rush the passer as well.

Joe Horn , OL 6-1 305, The Hun School/Hamilton, N.J: Horn is undersized but fundamentally sound. He plays with a good base and can anchor down and hold his own one on one versus nose tackles that play over him.

Gerrell Johnson, LB 6-3 200, New Town/Washington, D.C: Bell and his staff really focused on upgrading the linebacker spots. The objective was to get faster at all three spots. Johnson is your quintessential hybrid safety, outside linebacker that can align at multiple levels in a defense and make plays on the ball.

Cody Jones, DB 6-0 190, Sandy Creek/Fayetteville, Ga: Length is a desired trait today when it comes to cornerbacks. Jones is long, athletic and can play the ball in one on one situations. He has the look of a number, best on best corner.

Hugo Klages DE, 6-3 235, Otto Bennemann/Braunschweig, Germany: Another player with German ties. Klages is undersized but plays with a motor. He has a terrific first step, shows good burst and can close on the ball quickly.

Will Koch, QB 6-3 200, Niceville/Niceville, Fla: The first of two quarterbacks in this class. Koch is patient in the pocket and has shown the ability to throw the football from a variety of platforms.

Kyle Lindquist, QB 6-4 215, Pleasant Valley, Butte College/Chico, Cal: The JC transfer is a finished enough product that he could play this year. Lindquist has plus arm strength and displays good deep ball accuracy. He can throw from various platforms on the run and he is athletic enough to extend plays when things break down.

Nahji Logan, LB, 6-3 215, Hatboro-Horsham/Yeadon, Pa: Logan is undersized but fits the mold of today’s hybrid outside linebacker. He can play all three downs and can be effective as an edge blitzer or in coverage.

Osei Dixon, CB, 6-2 190, St. Vincent Pallotti/Bowie, MD: Dixon projects as either a corner or a free safety. He has the ball skills and the range to play both. Another defensive back who fits the mold of today’s long corner.

Reggie Marks III , OG, 6-3 300, Lackawanna College/Havre de Grace, Md: Marks is a JUCO prospect who could via for playing time this season. He is strong at the point of attack and gets consistent movement. He has an NFL frame.

Ellis Merriweather, RB, 6-1 220 Garden City College/Alpharetta, Ga: Merriweather is a big back who is smooth and fluid in space. A long strider, he has shown the ability to break off big runs and finish. Merriweather is ideally suited in a time share where he gets 10-15 carries a game.

Ethan Mottinger, OT, 6-5 295, North Attleboro H.S/North Attleboro, Mass: Having coached against Mottinger, he is a long athletic prospect who is raw. You see the long term upside but he will need a little time to develop. He certainly has the body type, feet and athleticism to project as a left tackle long term.

Abdul Kone, OLB, 6-3 200, Columbia Sr/Maplewood, N.J: Kobe is another hybrid outside linebacker, safety who has the athletic ability to play all three downs and is scheme versatile.

Jackson Manning, TE, 6-5 240, Mount Paran Christian/Acworth, GA: Manning is raw but athletic. If he develops into his frame further, he has the skill set necessary to become a highly productive starting tight end.

Te’Rai Powell, ATH, 6-0 188, St. Joseph Regional/Montvale, N.J: Powell had an offer from Rutgers but the versatile athlete chose UMass. Powell will play cornerback for the Minutemen and give them another long corner with exceptional ball skills.

Myles Turner, ILB, 6-1 222, The Bullis School/Silver Spring, MD: Staying with the theme of upgrading the back seven on defense, Turner gives the Minutemen a big body who can play MIKE or SAM linebacker.

Viczaril Alobwede, DE, 6-5 240, Stephenson H.S/Stone Mountain, GA: Alobwede is perhaps the most raw recruit in this class. He was a two star recruit coming out of high school but he has terrific upside and if given time to develop, could turn into a player.

Jonny Hassard, OG, 6-4 275, West Rowan H.S/Mount Ulla, N.C: Howard is another two star recruit with a lot of long term upside provided he develops physically and grows into his frame.