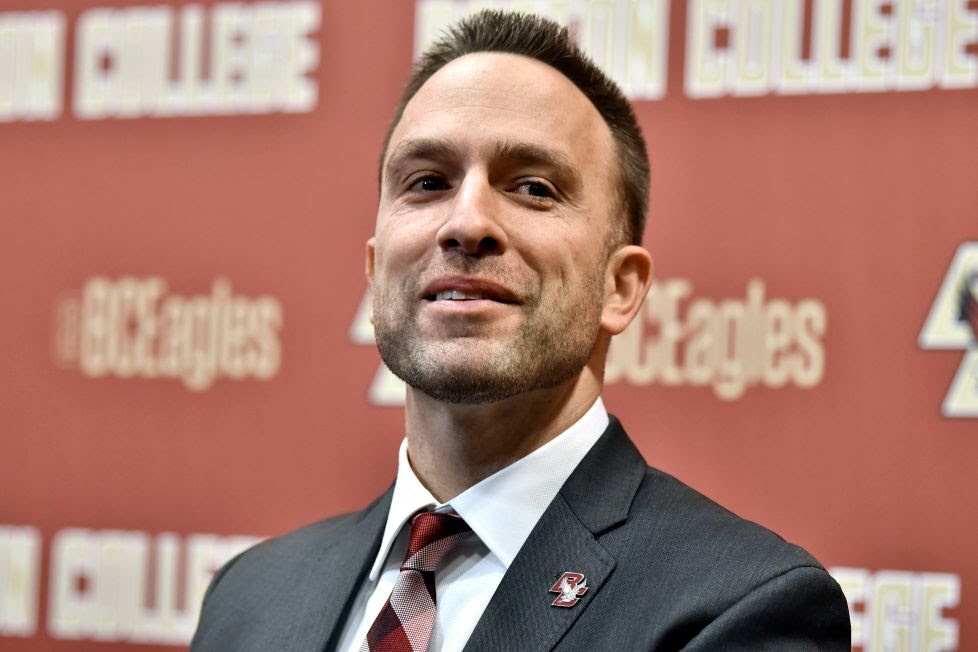 After all the energy surrounding the new hire of head coach Jeff Hafley and the implementation of his staff, we will finally start to see the wheels in motion beginning Saturday morning.

The Eagles hit the field for the first day of spring practice Saturday, and even though we won’t truly know who is and isn’t on the roster for quite sometime, there are certain things to watch early on in every position group.

Starting with the quarterbacks, new OC Frank Gignetti will be watching closely as new transfer Phil Jurkovec tries to assert himself at the top of the mountain. Dennis Grosel will look to have something to say about it after finishing the year, but the fact that everyone’s uncertain as to where Jurkovec’s waiver request process is at may make things a bit fuzzy in the early stages.

Losing running back AJ Dillon of course will hurt, but David Bailey proved to be a more-than-capable backup/change of pace back last year and there’s an old face in Rich Gunnel – former receivers coach – now coaching the position. If anyone knows what Bailey can bring it’s Gunnell, but you’ve got to imagine the competition will be amped up at that position.

Perhaps the unit with the biggest leg up on anybody starting on Saturday is the offensive line. With a bunch of faces returning including Tyler Vrabel, new coach Matt Applebaum not only has guys familiar with the program in house but a competitive room with plenty of continuity. Anyone expecting the Eagle offense to stumble early should take a look at the O-line first as BC is in great shape heading into the start of things.

Tight ends coach Steve Shimko will be relying on veteran Hunter Long to lead, both in the room and on the field. Long talked about taking over the leadership role during prior media access this winter and seemed extremely enthusiastic about it. If you’re building an entire new offense it’s not a bad place to start at the position, as Long can both block and stretch the field.

The most skill for BC early on before anyone straps on a single helmet or pair of shoulder pads seems to be at wideout. Both Zay Flowers and Kobay White return with explosive speed and still flying a bit under the radar after modest season’s in former coach Steve Addazio’s luke-warm offense. New receivers coach Joe Dailey spoke extensively when meeting the media last week about the importance of getting receivers involved in the running game and the importance of motion, something the Eagles can surely spring on teams more often this season with the speed of White and Flowers.

New defensive coordinator Tem Lukabu and defensive back coach Aazaar Abdul-Rahim along with new linebackers coach Sean Duggan will be in charge of building a defense the has to compete with elite offenses like Clemson. Max Richardson is back and should be the central leader on D.

During his portion of media availability, Duggan talked about the linebackers being the biggest energy guys on the team and the guys that should be looked to as leaders. Meanwhile, defensive line coach Vince Oghobaase spoke about bringing a certain level of energy each and every day as a coach, something that you have to think will quickly rub off on the players. Pass rushing needs to be elite in the ACC, and Oghobaase has plenty of experience to help lead the way.

BC’s special teams may be the biggest question, as kickers come and go while the entire coaching staff still needs to evaluate who will be reliable on the most underrated portion of the game. Matt Thurin will be in charge of getting the most out of the Eagle’s third phase of the game.

While the words “new head coach” immediately strike up thoughts of taking a step back and not a step forward for many programs whether it be the high school or college level, the staff that Hafley has assembled simply won’t let a step back be an option.

Saturday morning’s first true practice should be high energy as all of the offseason workouts have been. This staffs hell-bent on bringing the Eagles to prominence and Saturday will be an extremely interesting first look at what exactly that approach looks like.