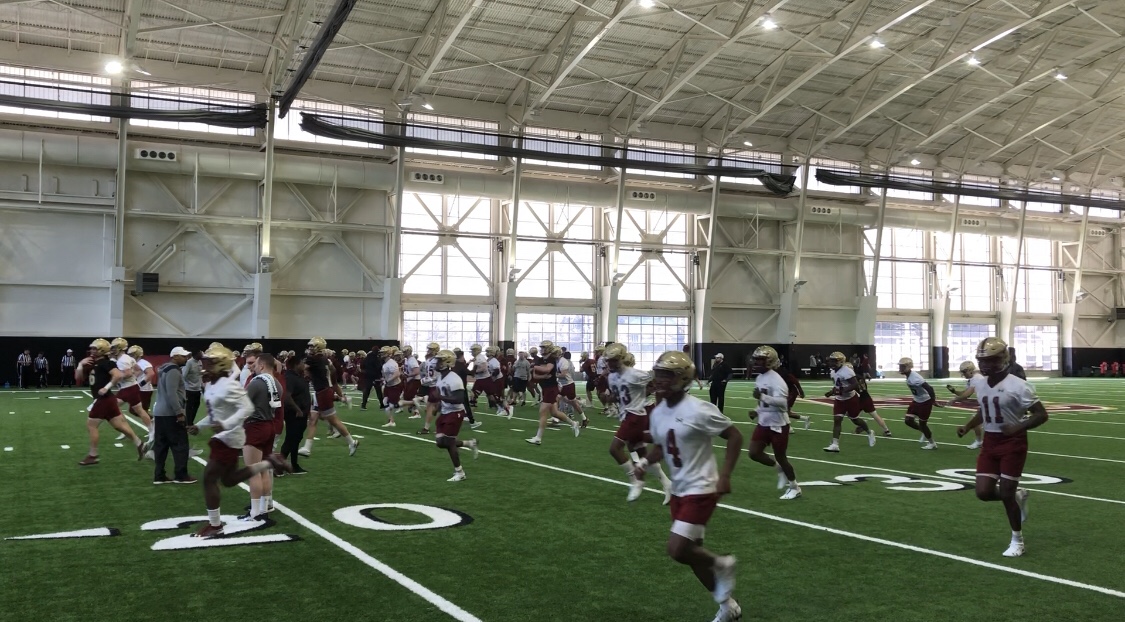 As soon as you walked into Fish Field House yesterday morning for the first spring practice of the Jeff Hafley era, you sensed the enthusiasm and energy that was present. The vibe was different. Everyone involved from players to the coaches, brought “the juice.”

The sound system was blaring music. Something you never heard during Steve Addazio’s tenure. Pop Smoke was the first artist I heard and I have to admit, that surprised me. The coaches and players were genuinely excited to start spring ball.

Members of the staff greeted the players as they walked into the field house. The practice was well organized and the players knew where to go and were on point. It helped that they were being guided by football ops assistant Brendan Bishop who had a microphone and was directing them where to go at the end of each period.

It was all very different from the Addazio era which was more about being a dude and portraying a tough persona. Hafley is a different kind of coach. He is calmer and more engaging. He was moving around and was more hands on, especially with the defense.

The players echoed that sentiment in their post practice comments. Cornerback Brandon Sebastian talked about Hafley’s hands on approach. “Coach is a DB guy. He takes us in a lot, doing Indy with us and he gives us his insight a lot. He just gets us better.”

Linebacker Max Richardson talked about the new staff and the different approach. “With the new coaches, it was a breath of fresh air. A new vibe, a new energy. A lot of the guys are looking to put a good foot forward for these coaches.”

It is obvious that the upper class men have bought into Hafley and the new staff. That is vitally important when taking over a program. Senior buy in is crucial.

Senior wide receiver Kobay White is proof of that. White entered the transfer portal after Addazio was fired but pulled his name and decided to stay. He talked about his first spring practice with the new staff. “At first I wasn’t really sure how the transition was going to go but for today, being our first practice, it went really smooth.”

Hafley was just as excited about the opportunity to work with his players. “It was fun, it was exciting. I think everyone was excited to get out here.” “I couldn’t really wait for it. Haven’t really slept the last couple of nights, looking forward to it.”

Notre Dame transfer quarterback Phil Jurkovec shared Hafley’s sentiment about starting spring practice at Boston College. “It was fun out there today.” Everyone was excited, running around.” Jurkovec added that it was sloppy at times but everyone was excited about the opportunity to compete. “There was juice out there. All positive juice.”

Jurkovec also talked about playing for new offensive coordinator Frank Cignetti. “I am excited about what we have. We have a lot of weapons. Coach Cignetti is drawing up all these plays. Once we get them down, it is going to be awesome.”

It was all positive yesterday which was to be expected. It was also only day one. There are still 14 more spring practices left so there a lot of work left to be done. The base offense, defense and special teams need to be installed this spring so it is imperative that Hafley and his staff build off of yesterday’s excitement and energy.

It is still too early to judge what the Eagles are going to look like come September 4th when they kick off against Syracuse. If yesterday was any indication, the players have bought in. Now it will be interesting to see if it translates to success long term.