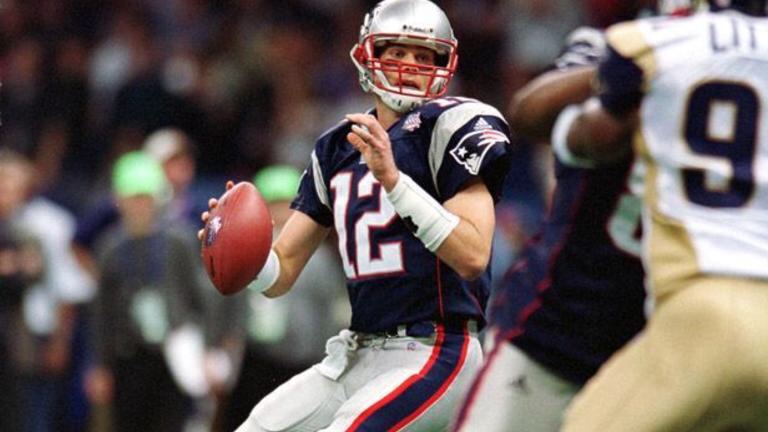 Day three: I’ve got plenty of food and toilet paper left, but Tom Brady is still a Tampa Bay Buccaneer.

It still hasn’t gotten any easier, and since we’ve got nothing but time on our hands, how about a good old fashioned list?

I’m a big list guy when it comes to sports, so here’s a look at what I view as Tom Brady’s top 10 moments as a New England Patriot:

Of course, the Brady legacy and Patriots dynasty may not exist without the tuck rule, but this was the game that started it all. One of the images that will last with Patriots fans for eternity is Brady’s run into the end zone followed by a spike before finally falling head over heels into the snow at the old Foxboro Stadium.

This was Brady’s first truly huge game statistically in a Super Bowl. Forget about the fact that the second half of this particular game may be one of the greatest in not only Patriots but pro football history, but securing a second title in three years legitimized Brady as a superstar.

Against Carolina, Brady was 32-of-48, throwing for 354 yards and three touchdowns. This was a look into the future where Super Bowl passing records would be shattered by the GOAT.

This night should never be forgotten. Brady not only set the single-season NFL touchdown record with 50 – the 50th coming on a deep ball to Randy Moss down the right sideline that also broke the single-season receiving TD record for Moss with 23 – but this game was aired on EVERY major television outlet, it was truly a historic night in every sense of the word while the team went 16-0.

The game itself may have cost the Patriots an undefeated season by fully preparing the Giants for the eventual Super Bowl matchup, but the image of Brady to Moss on the record-setting play – especially the very next snap after running the exact same play – should be one of the moments forever burned in your memory as a Pats fan.

Don’t get me wrong, I try to forget this game as much as humanly possible, but Brady’s performance should never be forgotten.

On the night of the Philly Special and Malcom Butler inexplicably not playing, Brady had what may forever stand as the greatest individual performance in Super Bowl history. 505 yards on 28 completions (48 attempts) for three touchdowns and no interceptions is just an absurd stat line on that stage.

This should have been Brady’s finest hour, even more so than any of his other titles or awards, but instead it is one that will forever stay in the back of the mental photo album.

6: Throw to LaFell in the 2014 division playoff win over Baltimore:

Also one of the greatest football games iv’e ever seen, Brady led the Pats back from two 14-point deficits, with the capper coming on an absolute dime down the left sideline to Brandon LaFell. That throw to Lafell should forever be on any “top 10 throws of Brady’s career” highlight video.

You’d think because of the way it ended this would be higher, but let’s not forget how putrid the first half of this game was from a Patriots’ supporter’s point of view.

Brady’s stat line ultimately read 43-of-62 for 466 yards and two touchdowns, but we all know this wasn’t his best game. Now, the fourth quarter and overtime were as money as money gets and were vintage Brady, but there isn’t one particular Brady moment from this game that truly stands out, it was simply “another comeback”, albeit from a ridiculous margin and not much time to do it in.

This isn’t a particular memory form a certain game, but if you think about it, what’s one of the true lasting images we’ll all have of Brady? It’s him sprinting out of the giant inflatable Pats helmet or now Pats logo, screaming “Let’s Go” at the top of his lungs while fist pumping. He did this eight times a year every season (except for 2008 and the suspension year) and we all took it for granted. Now, you can’t tell me when you’re at Gillette Stadium this year or next and there’s no Brady charge out of the tunnel that it won’t be one of the things you miss most of all from the GOAT.

3: A 34-17 win over the Saints in November of 2001, his first game after Belichick named him the permanent starter:

This one is personal for me, but there’s also some logic behind it.

As I stated in a previous story this week when Brady initially announced his intentions to leave New England, I was a huge Drew Bledsoe guy in 2001 as a 13-year old. So, when I went to this game with my father at the old Foxboro Stadium in a driving rain storm, I was disappointed that the “new kid” was usurping my favorite player at the time.

However, even though Bledsoe had been cleared to play, the week of this game Belichick officially announced Brady would be the starter going forward, and while it wasn’t his “first” start, I often look at this start as his first true jumping off point in his career.

Brady threw for four touchdowns and 258 yards on just 19 completions in truly horrific weather (trust me, it was so bad I remember how bad it was 19 years later), and even though the Ricky Williams-led Saints weren’t very good at the time, it was a huge day for Brady in terms of building momentum.

That win was following the loss to the St. Louis Rams on Sunday Night Football where the week before New England had showed they could play with anyone, and it was the start of a win streak that ran all the way through Super Bowl XXXVI. If Brady falls on his face in the Saints game after Bill put all his eggs in the Brady basket, who knows how the rest of 2001 and the next 20 years turns out?

2: The fourth quarter against Seattle in Super Bowl XLIX (2014):

This one’s easy. What Brady did that night (37-50, 328 yards, four touchdowns) in the face of Deflategate, with the dynasty facing a 10-year Super Bowl drought, in spite of it all the GOAT had arguably his best performance against what was (at the time) the best defense in the NFL.

That “Legion of Boom” defense that the Seahawks had will go down as one of the best in its era, and the calm, cool, collected way in which Brady came back from being down 24-14 in the fourth quarter is truly incredible and should be viewed as one of his greatest moments.

With little to no experience still and John Madden up in the booth telling him and the world he should just take a knee on the broadcast, February 3, 2002 will forever be the day Brady arrived on the scene.

The story of him taking a nap pre-game is legendary, but the composure that he played with that night, and specifically the balls he showed on the drive to set up Vinatieri’s winning field goal will still give you chills every time.

The throw to David Patten in the end zone in the first half also shouldn’t be overlooked as it was an absolute laser to the back corner, and he only threw for 145 yards that night, but of course the drive to New England’s first title will forever be the day Brady became the New England sports hero we would all fall in love with.