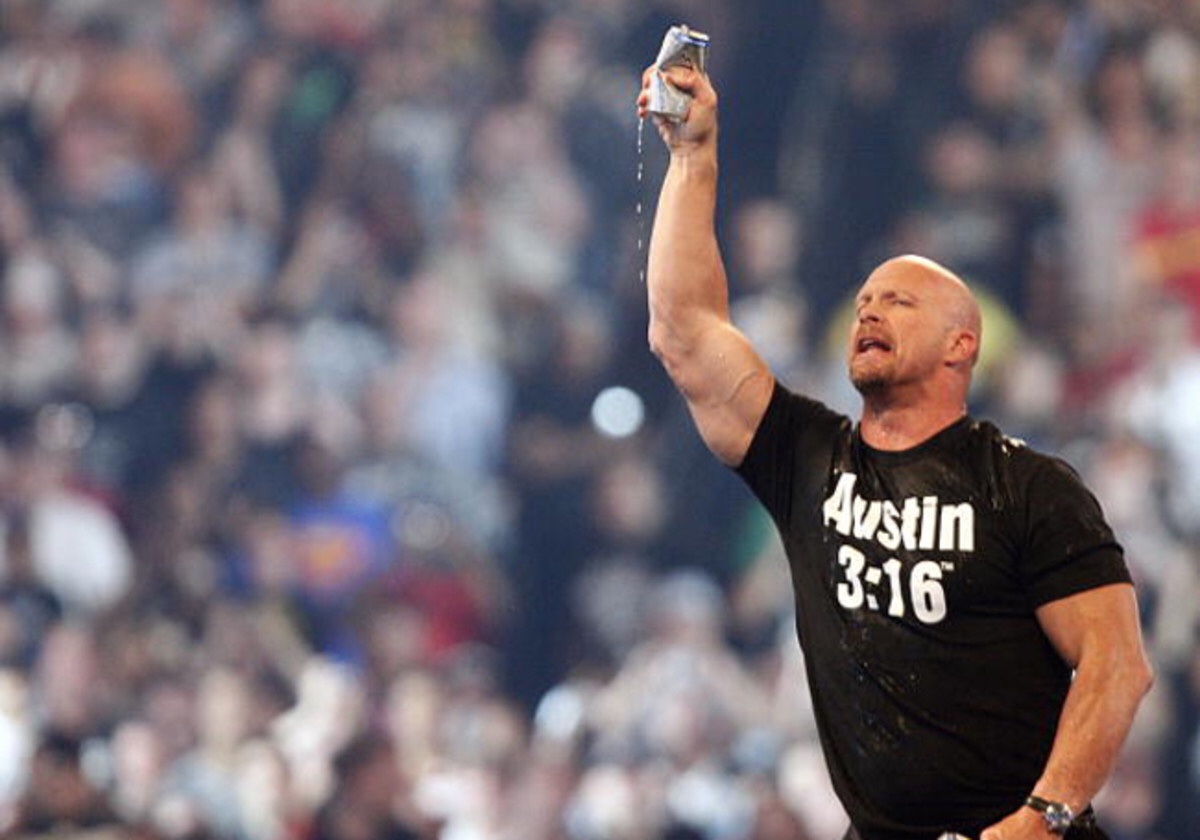 It’s WrestleMania weekend, and even though it may not feel like it this year, it got us here at New England Football Journal thinking about all the wrestlers that have made the jump from pro or college football over the years.

Arguably the greatest WrestleMania moment of all time involving a football player would have to be Hall of fame linebacker Lawrence Taylor facing Bam Bam Bigelow at Wrestlemania XI.

The match build up began at the Royal Rumble and it ultimately ended up being the Main Event of the show. LT wasn’t very far removed from being a Super Bowl champ and that night was a monumental crossover for pro football and wrestling.

With that in mind, let’s take a look at 10 of the best former pro and college football players who made the switch to wrestling and ultimately ended up having strong to HOF worthy careers:

McMichael was a member of the vaunted 1985 Bears defense and was a big reason why that defense is still considered one of – if not the best – defense in NFL history. McMichael had a 101 games started streak at one point in his career and was actually drafted by the Patriots in 1980 out of Texas. He played for both Green Bay and Chicago as well and actually had a pretty solid wrestling career.

Once joining WCW (World Championship Wrestling) in 1995, McMichael worked with the likes of Arn Anderson, Ric Flair and Jeff Jarrett, even winning a United States title from Jarrett in in 1997. His career lasted until about 1999.

Kevin Greene was a dominant, Hall of Fame linebacker for 15 years in the NFL. One of the most feared sack machines in league history and a three-time All Pro, Greene was also voted to the 1990’s All-Decade team. Greene only wrestled in WCW for about two years from 1996-1998 as the NFL began putting clauses in contracts that wouldn’t allow players to wrestle. He soon retired from the league in 1999. Nevertheless, Greene is one of the biggest names in the history of football to cross over into the wrestling world.

One of the biggest names in the sport currently, “Reigns” played football at Georgia Tech from 2003-2006, earning All-ACC first team honors in 2006 as a defensive tackle. Reigns went undrafted in the 2007 NFL Draft, but did end up getting tryouts with the Vikings and Jaguars before ultimately having to play for the Edmonton Eskimos of the CFL in 2008. Reigns made the jump to wrestling when he signed a developmental contract with WWE’s Florida Championship Wrestling camp in 2010.

All he’s done since is create one of the greatest factions in wrestling history with “The Shield”, he’s won Royal Rumbles, world titles, intercontinental titles, tag titles, and has main evented WrestleMania’s.

Reigns is currently one of the top perofgmrners in the world and has also battled Leukemia while trying to stay at the top of the industry.

Ron Simmons – better known as “Faarooq” for much of his career with WWE – is a College Football Hall of Famer for his time with Florida State from 1977-1980. Simmons was a nose guard who who took home All American honors in both 1979 and 1980. During his playing career, Bobby Bowden’s Seminoles went an absurd 39-8.

Simmons was drafted in the sixth round of the 1981 NFL Draft, playing for the Cleveland Browns, but his career ultimately fizzled out and he went to Crockett Promotions before eventually landing in WCW. In 1992 Simmons made history by becoming the first ever black WCW champion – and just the second black man to win any wrestling world title.

Simmons had a brief stint in ECW (Extreme Championship Wrestling) that ended in 1995 before he made the jump to WWE. After struggling a bit he formed “The Nation of Domination”, a faction that ultimately ended up being quite a success. From 1998 on Simmons would forever be remembered for his catchphrase “DAMN” while working with John Bradshaw. The two formed the Acolytes Protection Agency (APA) and had a dominant run as one of the most popular tag teams in history. Simmons was inducted into the WWE HOF in 2014 and the College Football HOF in 2008.

One of the greatest wrestlers in history, Cena’s football accolades aren’t as extensive as many on this list, but he is from West Newbury Massachusetts and went to both Central Catholic and Cushing before Springfield College. At SC Cena was a Division III All-American football player.

Cena became a wrestler in 2000 after pursuing body building a bit, and all he’s done since then is become a 16-time World Champion, has main evented WrestleMania five times, is one of the most recognizable faces not only in wrestling but in all of professional sports, and perhaps above all else he’s been able to grant over 600 “Make a Wish” wishes.

“Big Van Vader” as he was known for many years was one of the most dominant big men in both football and wrestling in history. Vader unfortunately passed away in June of 2018 but his legacy is everlasting.

On the football field Vader was a force for the Colorado Buffaloes, named a second-team All American in 1977 as an offensive lineman. In 1978 he was drafted by the LA Rams as a center in the third round. Vader won an NFC title in his first season, but ultimately had to call his football career early due to injuries.

Goldberg was an absolute monster for the University of Georgia football program in the late 1980’s as a defensive tackle. In 1990 the LA Rams took him in the 11th round of the NFL Draft, but ended up playing for his hometown Falcons in 1992. That lasted until 1994, the Panthers picked him up in an expansion draft, but he would never suit up in black and blue and walked away from the game due to injuries.

Goldberg exploded on the wrestling scene in 1997 as WCW began booking him with a lengthy “undefeated streak”. One of the most memorable moments in wrestling history came at the Georgia Dome in 1998 when he beat Hulk Hogan for hi first world title on national TV during Monday Nitro.

WCW ended up dying an ugly death and after dabbling in Japan for a bit Goldberg went on to have success with WWE until about 2005. After quite a hiatus Goldberg came back in 2015 and has continued sporadically appearing, including a few world title reigns these past couple years.

One of the most terrifying men on the planet today, Lesnar is the current WWE Champion.

While most guys went first from football then to wrestling, Lesnar went the complete opposite route. Lesnar was a dominant ameture wrestler and a national champ for the University of Minnesota.

Lesnar signed with WWE in 2000 and by 2002 he was the youngest champion in company history at just 25 years old. Brock dominated the wrestling world as one of the top guys until 2004 when he decided he needed a new challenge: the National Football League.

He hadn’t played since high school, but Lesnar left WWE and went on to perform at the NFL Combine in April of 2004. Ultimately, the Vikings signed Lesnar and played in their preseason games before getting one of the final cuts in August.

MMA was next for Brock and after dominating that world he came back to wrestling, where he is still currently dominating and will forever go down as one of the best pure athletes in wrestling or football history.

There is not one on this earth who hasn’t uttered the word “If ya smellllll” or “It doesn’t matter!”when talking to friends if they grew up a wrestling fan in the 90’s or 2000’s.

Before becoming the “most electrifying man in sports entertainment” Dwayne Johnson was a force for the Miami Hurricanes football program. Johnson was a defensive tackle on the 1991 national championship team, but unfortunately injuries cost him any shot at the NFL. After being replaced by Warren Sapp “the Rock’ was offered a chance to play in the CFL but it never really materialized.

Johnson debuted as Rocky Maivia in 1996 but crowds never really received it very well. Rock was eventually part of The Nation of Domination with Faarooq where his career really began to take off. Soon, Dwayne Johnson was a superstar and around 1999 or 2000 was when his career blossomed as he was a multi-time WWE champion and had some of the most memorable “feuds” in history. The Rock is still one of the most popular actors/wrestlers/overall people in the world today, but it all started on the gridiron.

My favorite wrestler of all time and arguably the greatest of all time, Austin’s football career isn’t very extensive, but when you’re the Texas rattlesnake you get the due recognition.

Austin was awarded a full scholarship to Wharton County Junior College before moving on to play some ball for North Texas in the 1980’s as a defensive end. Unfortunately (or fortunately for wrestling fans) his football career never really took off, and Austin joined WCW in 1991.

His WCW career was a story of wasted talent, and after leaving WCW and finding his character in ECW in 1995, the WWE reaped the benefits when he came on board in 1996.

It took a while, but after building up his bad-assery through various “feuds” and “promos”, Austin won his first WWE title at WrestleMania 14 in Boston. His career continued to take off from there and he is widely considered to have been more impactful on the business the Hulk Hogan, Ric Flair or the Rock.

So, when you’re watching WrestleMania this weekend, take a look at some of the athletes closely. Many of these guys have football backgrounds that range from high school to dominant in college to NFL worthy.

The wrestling world has been lucky to see so many outstanding football players transition into wrestling superstars, and it’s a pattern that we should all hope continues for decades to come.