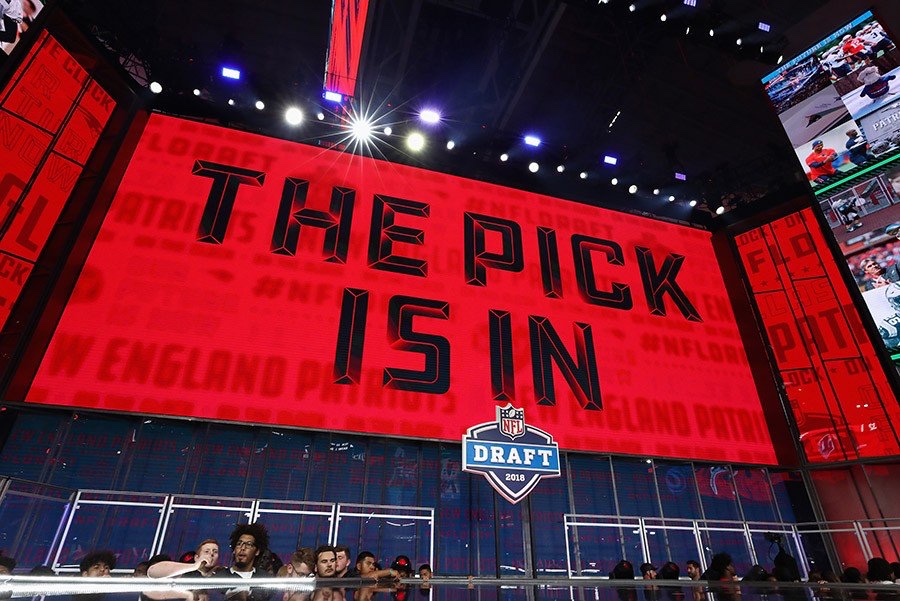 The NFL Draft is upon us. Without further ado. Here is my final Patriots mock draft.

Round 1: Pick #23: Kenneth Murray, OLB, Oklahoma: The Patriots will try to move up if they can. If not, they will stand pat and take the best defensive player available. Murray is a three down linebacker who fills an immediate need with Kyle Van Noy, Jaime Collins and Elandon Roberts all gone. He can step in and play right away at the SAM linebacker spot.

Round 2: Pick #63: Cole Kmet, TE, Notre Dame: The Patriots currently don’t have a second round pick but I have them trading into the second round to take the best tight end in this draft in Kmet. At 6-6 252, he has the size and the skill set to be a starting tight end and a good one at that.

Round 3: Pick #98: Davon Hamilton, DT, Ohio State: Hamilton is a big, physical tackle who can control the line of scrimmage against the run and consistently rush the passer. He would be a great value pick here and fill a new.

Round 4: Pick #125: James Morgan, QB, FIU: The position the Patriots fans will focus on this weekend will be quarterback. Well, Bill Belichick finally takes one at this spot. Morgan has good size at 6-4 230 and has plus arm strength. The Patriots are rumored to be very high on Morgan.

Round 4: Pick #139: Anfernee Jennings, EDGE, Alabama: Jennings can play in a two and three point stance. He can rush the passer and drop in coverage effectively. He is a versatile player who was coached by Nick Saban. That matters to Belichick.

Round 6: Pick #195: James Proche, WR, SMU: The Patriots have been linked to Proche throughout the pre-draft process. A four year starter at SMU, Proche holds every receiving record at the school. He is a terrific fit in the Patriots offense because he can play on the line or in the slot.

Round 6: Pick #204: Kyle Murphy, OG, Rhode Island: I coached against Murphy in high school so I have pretty good idea of what type of player he is. Murphy is a strong run blocker who offers versatility. He played all five offensive line positions at URI which is important because versatility matters to the Patriots. Murphy would give them the versatility they need along the offensive line.

Round 6: Pick #212: Tyler Bass, K, Georgia Southern: The Patriots use their third of four sixth round picks on a kicker and get Stephen Gostkowski’s replacement in Tyler Bass.

Round 6: Pick #213: Charlie Woerner, TE, Georgia: The Patriots draft their second tight end in this draft. Woerner is a terrific blocker who is also a big a threat in the passing game inside the hashes. He would be a good fit in the Patriots system.

Round 7: Pick #230: Malcolm Perry, RB/WR, Navy: The former Navy quarterback is a terrific athlete who would be a great value here. Perry could play in a 10 personnel grouping as a fourth receiver but more importantly, he can return kicks.