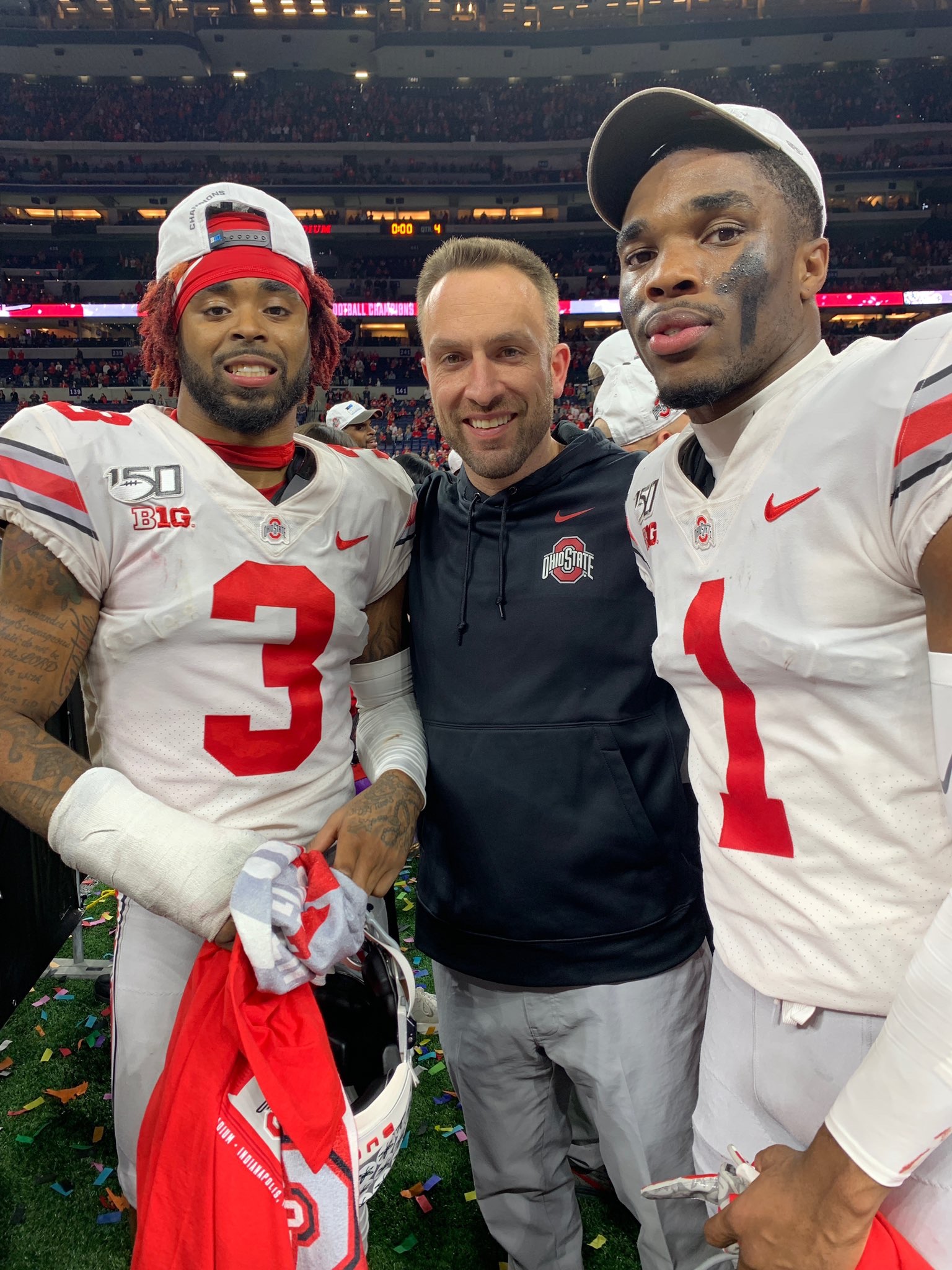 Boston College head coach Jeff Hafley had quite a night on Thursday, and he didn’t have to leave his house.

The former Ohio State defensive coordinator watched as three players that were a part of his top-ranked defense a year ago went in the first round – all in the top 20 with two of them going second and third – last night in the 2020 NFL Draft.

“This is why I came back to college football!!!!” Hafley exclaimed. “Pick No.2 (Chase Young), pick No. 3 (Jeff Okudah), pick No. 19 (Damon Arnette) life changing moments, three first round picks, No.1 D in the country. Love you guys. #futureprobowlteam #GetIn.”

This is why I came back to college football!!!…pick -#2 @youngchase907 pick #3 @jeffokudah pick#19 @da3_ysn life changing moments, 3 first round picks, #1 D in the country. Love you guys. #futureprobowlteam #GetIn

He also followed up with another tweet on Friday that included a picture of him with Okudah and Arnette that said “you coach to help change lives…championship season, first round picks..but as much as I might have helped change theirs, these guys also changed mine. The relationships are life long! Thank you (Okudah and Arnette).”

You coach to help change lives…championship season, 1st round picks..but as much as I might have helped change theirs, these guys also changed mine.
These relationships are life long! Thank you @jeffokudah @da3_ysn pic.twitter.com/ZrYkrS4PDh

Since joining the Eagles, it’s been clear that Hafley really tries to emphasize the personal relationships he builds with his players and coaches. If you’re a current Eagle on the roster and you see three guys going in the top 20, but you also see just how much Hafley cared about these guys throughout their whole process, it’s hard not to be excited about the doors Hafley is opening for young players.

Now, it also doesn’t hurt that each guy selected was a hell of a football player as well.

Chase Young went second overall to the Washington Redskins. People have already talked about Young as a potential Hall of Fame player, and his stats from college are quite impressive,

Young played 34 games as a Buckye defensive end, racking up 98 tackles (68 solo tackles, 30 assisted, with 40.5 of those tackles resulting in a loss. He had 30.5 sacks including a ridiculous 16.5 last season and nine forced fumbles in his career. Young also took home plenty of hardware last season, with the Ted Hendricks Award, consensus All-American, the Chuck Bednarik Award, the Bronco Nagurski Award and the Big Ten Defensive Player of the Year Award.

Okudah played 35 games in his three years at Ohio State, racking up 83 total tackles (64 solo, 19 assisted) and three interceptions, all of them coming last season. Okudah was also a consensus All-American last year as well.

Rounding out the Hafley Big Three last night was Arnette going 19th overall to the Las Vegas Raiders. Not only does Hafley get guys f=drafted, they end up getting to live in Vegas too.

Arnette will play for head coach Jon Gruden, a man that loves tough, in-your-face type of guys. Arnette is actually the only guy in the group that played four years at Ohio State. Arnette didn’t play in 2015, but starting in 2016 he played a total of 47 games as a Buckeye. 140 total tackles (104 solo, 36 assisted), five interceptions (one each year except for two in 2017), one pick-six and 22 total passes defended all addd up to earning a top 20-pick.

As usual talent will always prevail in the NFL Draft, but if this year was any indication of what Hafley and “Defense University” (that just came to me) is going to become, there are going to be quite a few happy Eagles in the years to come after their time at The Heights.