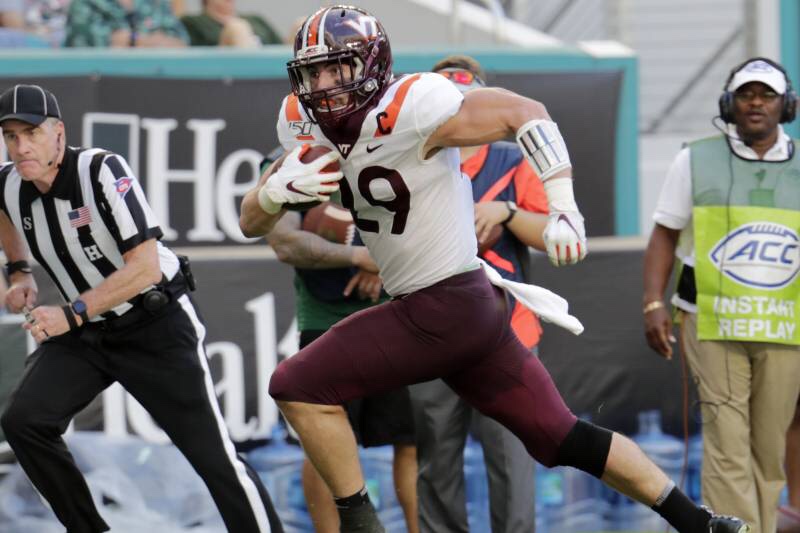 Keene is former quarterback and running back who bulked up and was moved to tight end. He has tight size at 6-4 253 but with a running back skill set. He was a bit of a reach as a third rounder but that is my opinion. The Patriots obviously rated him higher on their board.

Here is a scouting report on Dalton Keene.

Hands: Keene has soft hands and he catches the ball well in and around his frame. He high points the ball in the red zone and can pull it away from defenders. Makes difficult catches look routine.

Routes: Runs good short and intermediate routes. Shows good body control when breaking down to snap into the second portion of a route. Does a good job of tracking the ball on vertical routes. Needs to improve on setting up his routes well at times and has a tendency to round them off.

Long & Short: Keene is a short to intermediate receiver who will be effective inside the hashes on crossing routes and spot routes. Gains separation in the flat on out routes and has the vertical quickness to make chunk plays. He is more of a possession tight end who has a good feel for uncovering in the red zone.

RAC: You see Keene’s running back instincts after the catch. He has good acceleration and is a straight line runner who is willing to put his shoulder down and run a defender over.

Release: Needs to move to get a desired release. Releases better from a backfield or wing alignment. Has good hands releasing from an inline alignment but does get re-routed.

React to Ball/Crowd: Keene competes for the ball in the middle of the field. He has a good understanding of zone coverage and settling. Has the short area quickness to separate from a linebacker or safety in match up man.

Initial Quickness: Shows good quickness and suddenness on the snap. Gets into his route quickly and efficiently. Doesn’t waste motion.

Final Thoughts: I saw Keene play in person last season and the one thing that stuck out to me was his competitiveness and effort. He plays with a high energy level and is a good athlete. Rambo as he is nicknamed could be a good match up piece for the Patriots.