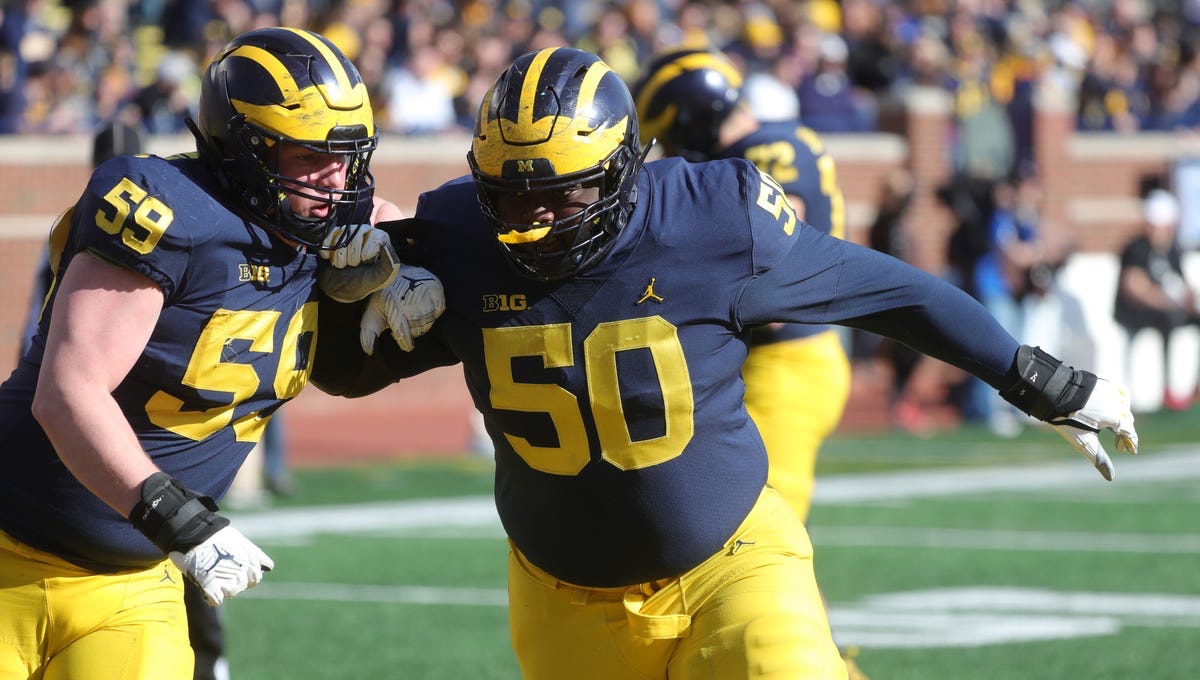 The Patriots traded up in the sixth round to draft Michigan guard Michael Onwenu. Onwenu was a three year starter at Michigan.

Onwenu is thick at 6-2 344. He has long arms and plays with good power at the point of attack.

Here is my scouting report on Onwenu.

Initial Quicks: Onwenu has good quickness on the snap. Gets inside hand placement and can re-establish the line of scrimmage.

Run Block: Good vertical run blocker who gets inside hand placement and control defenders on single blocks. Run blocks with a good base and leverage. Gets good movement on vertical double teams but does struggle on second level blocks.

Pass Block: Controls bull rushers. Quick setter who has heavy hands. Onwenu effectively punches, shocks and resets. Good at short area resetting laterally. Speed rushers in long down situations give him problems. He leans against speed rushers and over commits.

Pull & Trap: Offers very little as a puller. Can skip pull on a horn or wrap play if uncovered but lacks the athleticism to be an effective long puller.

Use of Hands: Heavy handed. Controls defenders on contact. Gets separation and keeps defenders off balance because of his hand strength. Gets inside hand position and maintains it.

Strength: Plays with brute strength. Anchors down and moves the pile. A finisher as a run blocker. Routinely drives defenders into the ground.

Explosion: Shows good explosion as a short area run and pass blocker. Plays with good leverage once he’s engaged and sustains his blocks.

Final Thoughts: Onwenu is a big man, a very big man. He is a terrific short area run blocker who is dominant at the point of attack. Onwenu can control his area as a good short area pass blocker but he can be heavy footed and struggle against speed rushing three techniques. He needs to lose some weight. If he does and improves his lateral movement, he has the potential to start.