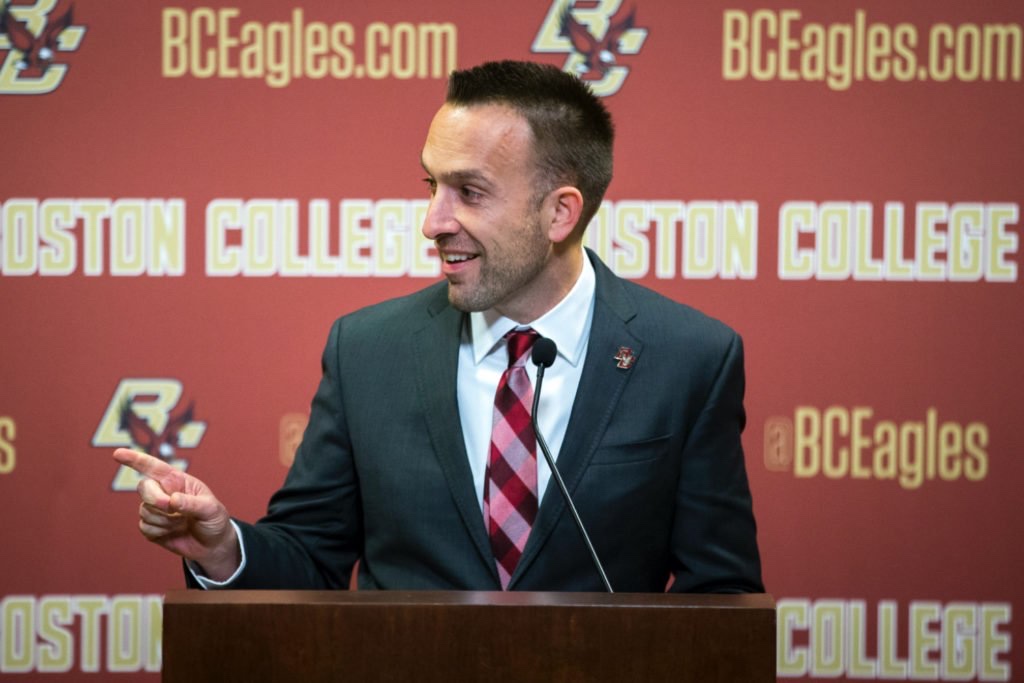 Hootie and the Blowfish once asked “time why you walk away like a friend with somewhere to go?”

Time, of course, is our most precious commodity, and while the pandemic has given us more time with loved ones or the ability to try and become better creatively, for a Division 1 football program, time is of the essence.

Currently, Boston College coach Jeff Hafley is trying to use his time to the best of his ability while virtually establishing a certain culture at The Heights. Hafley has brought a plethora of buzz to the program since his hire, but with only a handful of practices under his belt with a brand new team, what stuck out the most during his meeting with the media via Zoom on Thursday afternoon was the fact that everyone involved seems to be “getting in” regardless of the circumstances.

“Throw expectations out the door, do the best we can every single day,” Hafley said. “Make sure our players are healthy and safe and make sure their families are healthy and safe. Our staff and their families, just wake up and do the best we can every single day, but what for what this staff has accomplished thus far, I’m so appreciative of all their hard work. I appreciate their hard work and how close they’ve been able to get to our players already, it’s been awesome.”

While Zoom is a heck of a tool, it hasn’t made it any easier on Hafley or his staff not being able to be in direct contact with players. Even the little things like taking in the scenery around campus has been taken away. But, then again, no one really could’ve predicted this when Hafley last met with the media in person back in March.

“Did you guys ever think you’d be having a Zoom meeting with me in your living rooms?” Hafley joked. “It’s hard. I just miss walking around campus and seeing the students and meeting some more faculty. Everything I had kind of thought about doing and was excited about, being on the move and getting to see alumni, has been put on pause.”

Despite all of our inconveniences, everyone in the world has learned to adapt on the fly, and even a team literally trying to start over for all intents and purposes is taking this situation and using it as a chance to get better in the simplest ways.

“I thought I was a really organized person, but I realized I’m not,” Hafley admitted. “It’s helped me get a lot organized and it’s showed me too that you can do a lot from home as well. We’re doing the best we can as a staff and players so that’s where we’re at right now.”

In terms of how a season might look for college football in the coming months, that, like everything else in our world, is up in the air as of now.

When asked if there was any exact amount of preparation time he would like, Hafley acknowledged it’s not about what he would want.

“My belief on this whole thing is we have to do whatever we can for the players to be safe and healthy,” he said. “That’s the main objective. We can’t get into a situation where we’re going to put their health, them getting injured into jeopardy. As long as they give us enough time to do that, then we’re going to put the scheme in the best we can, make sure the players can get out there and go play ball.”

Whether you are an athlete or not, throughout all of our childhoods, teenage years or as young adults going to college, we’ve always been told that time management is critical. Now more than ever – especially if you’re a Division 1 football player – time management may be the most critical tool there is. With that being said, the Eagles staff is trying to make things as easy as possible for players, sticking to what days would have looked like had they been able to go to class or work in Fish Field House.

“Time management is so important,” Hafley said. “We think that people being in a routine during this time is so important. So, we’re trying to keep the same routine we would’ve had. For example, our guys would’ve worked out in the morning, met in the morning and then had all afternoon for academics. So, we’re trying to keep them in a very similar routine so they’re not all just waking up at 2 o’clock and meeting, so time management is the key, the key to anything.”

Despite the outrageous task of implementing an entirely new culture and scheme for a Division 1 football program without any face-to-face contact or coaching, Hafley has been grateful for his time with his family, a true novelty in the coaching profession.

“I’m good,” he said. “My family is here which is awesome, I’m so thankful that I didn’t get stuck here while they got stuck in Columbus, otherwise I would not be doing good. Iv’e used this time to kind of spend more time with my kids and my wife, so I’m really good from that regard.”

With his infectious attitude, it’ll be very interesting to see just how quickly Hafley and the Eagles are able to hit the ground running once life returns to normal, but for now, it’ll just be business as usual from home.

“I think you’ve got to take the positive in any situation,” Hafley added. “For a football coach to spend that much time with his family is huge. I can’t tell you the last time I’ve got that, so everything else has been a little difficult but I’m a pretty positive guy, I stay upbeat, but sometimes you wake up in the morning and you’re like “why is this happening again?”, but you just talk to yourself a little bit, get yourself all fired up and get rolling.”