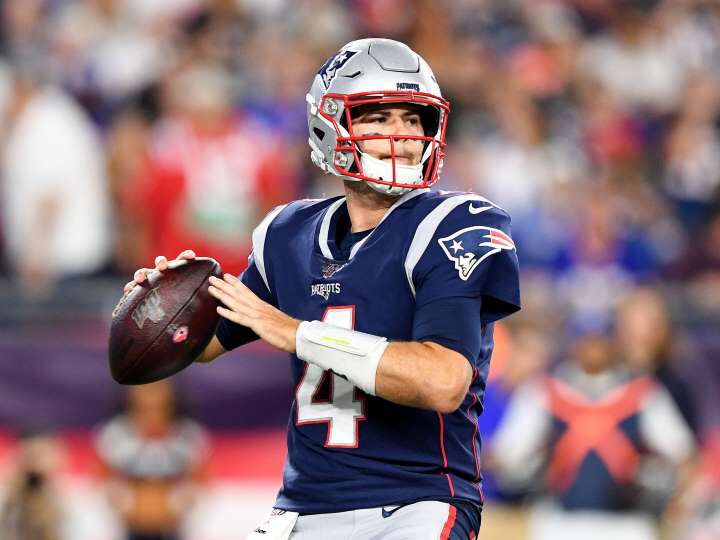 Now that the dust has settled on the draft, and even though we don’t exactly know when the Patriots will report to training camp for actual on-field work, we do know that it looks like Jarret Stidham will be the front runner for the starting QB job.

With just a year under his belt and in the background of Brady’s awkward exit, it’s tough to know exactly just what Stidham has to offer other than college highlights and last year’s preseason.

We thought now would be the perfect time to look into what type of player Stdham really is.

For starters, it’s important to remember that in 2016 Stidham sat the year out after transferring from Baylor to Auburn, so the Patriots selected him based on just three years of worthwhile film.

In his first seven games with Baylor in 2015, Stidham threw the ball just 28 times total as the backup to Seth Russell. Stidham got the starting job when Russell suffered a season-ending neck injury, and while on the road at Kansas State in his first start, Stidham was electric, throwing for 419 yards and three touchdowns with no picks in a 31-24 win that moved the Bears to 8-0 at the time.

Stidham broke a bone in his ankle late in 2015 which finished his season before any bowl game, but, in his three games as a starter as true freshman, Stidham threw for 934 yards, six touchdowns and two picks, quite a nice sample size from a young guy.

After the transfer to Auburn Stidham started 2017 with a 5-1 record, with the only loss coming in the second game of the year to Clemson on the road in Death Valley. After a loss to LSU in mid-October, Stidham rattled off five more wins in a row before falling to Georgia on December 2nd in the SEC title game.

The Tigers went on to lose to UCF in the Peach Bowl, a game that Stidham completed 65.1% of his passes in for 331 yards and a TD. Stidham beat up on Mercer earlier in the year for his best statistical game of the year, but the bowl game – and more importantly the final game of the season – was by far his best game of the year given the opponent at the time.

Stidham finished 2017 with 3,158 yards, 18 TD’s and six interceptions in 370 attempts and carried it over into his final year. Stidham and the Tigers started the year 4-1 with wins over Washington, Alabama State (I know, I know…), Arkansas and Southern Mississippi, throwing five TD’s and two picks in those first five games.

The only loss in that opening stretch was to LSU where Stidham had just 198 yards and a touchdown to go with two picks. Auburn fell to 4-3 after back-to-back losses to Mississippi State and Tennessee, but Stidham did throw for 322 yards, two TD’s and two interceptions in the loss to the Volunteers.

Wins at Mississippi and at home against Texas A&M pushed the Tigers to 6-3, but a 36-24 loss in Georgia killed that momentum. Stidham threw for just 163 yards that day against the Bulldogs. A win over Liberty followed but a  30-13 loss on the road to Alabama on November 24th left Auburn at 7-5, good enough for the Music City Bowl against Purdue.

While the name may not have the same clout as a Fiesta or Sugar Bowl, what Stidham did offensively in this game should not be overlooked, as it was, again, the final game of the year and this time the final game of his college career. Stidham threw for 373 yards and five touchdowns on just 21 attempts and 15 completions in a 63-14 win.

What does this all mean? Of course the real answer is nothing, because all that matters is what the coaching staff sees on the field, but it could also be a glimpse into what Belichick saw when he drafted him.

No one will ever match what Brady did, but if Stidham can lead you to 10-6, 11-5 (seasons that normal fans in the NFL usually lust for consistently) then you’ve got a really good starting quarterback.

Above all else, his lack of interceptions just leaps off the page, and if there’s anyone who cares about turnovers more than anything, it’s Bill Belichick. In fact, I’ll even give you a second to prepare for just how outrageous this number truly is…

Jarrett Stidham threw just 13 interceptions in 848 career college attempts. That’s absurd and should give you all the confidence in the world in the possibility of him being the new face of the franchise.

So, despite our lasting image of Stidham right now being a pick-six against the Jets, that one play doesn’t even come close to defining the type of player he is, and I think the Patriots know it.